Hi everyone,
Anxiously awaiting my delivery of the anova one. Simply could not wait for the new Bluetooth gadget and honestly look like I can easily lookup in a table over using a smartphone app.
As for the cooking vessel I was looking at the ikea boxes made of polypropylene. They come with a lid, so I think they are pretty much ideal. I was planning on using two of them as they can be stacked and just use some felt-pads to generate an air gap between them for insulation.
Any comments on using an ikea box? I live in the uae and here the polycarbonate boxes are not easy to get ahold of - furthermore I have a feeling that there are even more chemicals in polycarbonate then polypropylene. Polypropylene seems to deal well with temperatures up to 110 degrees celcius, so should not be an issue.
Any chemist out there which can comment.

I believe an insulation of the vessel is not that important. Check out my post on 12 hours cooking: 12 hours in uninsulated uncovered Cambro box (at temperature 35 °C above room temperature) consumed only 1.76KWh. And temperature stability was outstanding.

I believe any large stock pot which you already have would work just fine.

Cambro boxes, of course, are nice (but one have to find a restaurant supply store nearby to have them cheap). Don’t try to buy a vessel before you get the Anova: the slant of the box wall or some border on the top might not play well with Anova’s clip (though most geometries would work without problems).

Ideally, Anova would offer an insulated cooking vessel of some type with food safe materials (even when heated) adapters for the 3 different models. Evaporation and noise reduction + energy savings would be the main benefits.

Agree, that is an area that is a little under informed. Choosing one plastic container over the other is a little difficult, especially as there is not a lot of guidance. Everyone seems to agree on food grade PVC containers, but when there are much cheaper alternatives in ikea made of polypropylene. Polypropylene is as a plastic type safe up to 130 degrees celcius. I am also thinking that since you are putting your food in a food grade plastic bag you should not have a major problem, especially as the temperatures tends to be much lower when preparing meat.
Anyway, any chemist out there do chip in.

I use Cambros or coolers. I have not cut up the coolers; instead, I have cut up Reflectix insulation – basically, insulated bubble wrap – so that it floats on the surface of the water. The goal is not primarily insulation, but reducing evaporation by covering the surface area of the water. Regular bubble wrap should be fine if you can’t find Reflectix. Some people swear by polypropelene balls, which cover the surface area but allow you to insert and remove bags without having to lift a lid. http://www.sousvidetools.com/polypropylene-balls

I use Cambros or coolers. I have not cut up the coolers; instead, I have cut up Reflectix insulation -- basically, insulated bubble wrap -- so that it floats on the surface of the water. The goal is not primarily insulation, but reducing evaporation by covering the surface area of the water. Regular bubble wrap should be fine if you can't find Reflectix. Some people swear by polypropylene balls, which cover the surface area but allow you to insert and remove bags without having to lift a lid. http://www.sousvidetools.com/polypropylene-balls

The polypropylene balls aren’t cheap. Not sure I’d spend more for the balls than I did for my Anova. Having the ability to insert and remove the bags without lifting the lid would benefit commercial kitchens but would actually be a PITA for the home (collecting and drying the balls after a cook).

Again… I for one would fund a kickstarter effort for a purpose built cooking vessel.

I have a cooler that only 1/2 the top comes up. I hope to use that. I’ve heard (not 100% sure how true it is), that a cooler helps hold the temp better, allowing a bit more water to be used.

I’ve done 72 hour shortribs in a 40 qt igloo cooler with the Anova v1. I had to prop the lid up because of the unit so I placed cellophane wrap across the open edges of the cooler to decrease evaporation. After the first night the cellophane had sagged under the weight of the condensation to the point that it was floating upon the surface of the water. I left it there for the remaining 2 days. I lost approximately 1 inch of water over the 3 days with that vapor barrier. Didn’t even top it off. Not too shabby.
Ribs weren’t so bad either.

What about something like this for controlling evaporation:
http://www.amazon.com/Practice-Ping-Pong-Balls-Tennis/dp/B000ILDDSM

Cambro boxes, of course, are nice (but one have to find a restaurant supply store nearby to have them cheap). Don't try to buy a vessel before you get the Anova: the slant of the box wall or some border on the top might not play well with Anova's clip (though most geometries would work without problems).

Would I have the new Precision Cooker on order. Can you recommend dimensions for a Cambro box? They come in all capacities and sizes.

@jimlewis‌ I use 8qts square most of the time, and keep 12 qts square around for bigger jobs.

Glad you mentioned the 8 qt squares. I have a few of them I use for bread rising. I was going to buy the 12 qt square but if the 8 qt is usable, maybe I’ll hold off and invest in some Reflextix insulation instead… for the time being…

Hey to everyone that commented and have participated in the thread. Here is an update of what I did for cooking vessel.
Initially I used a polypropylene box from ikea but the discussions on plastic safety and extended cooking times made me a bit nervous. Not in a way that I ever think I can avoid exposure to plastic and bpa, but in a way that I atleast should avoid exposing myself too much.

Therefore I shed out and bought a stainless steel food grade GN1/1 box. This is exactly the same dimensions as a cambro box and therefore perfect for the anova ONE which was build for this kind of environment.
I found a restaurant supply store and the stainless steel box was 30% more expensive to cambro polypropylene, so I shelled out the extra cash.

Of course it transmits more heat, but according to my observations the anova does not have any problems keeping the temperature. I could imagine that it has some cost on the electricity bill, but again how much does a 1mm plastic barrier insulate.

I bought a 36cm diameter aluminium pan with a lid. I cut out a slot for the cooker and use this: 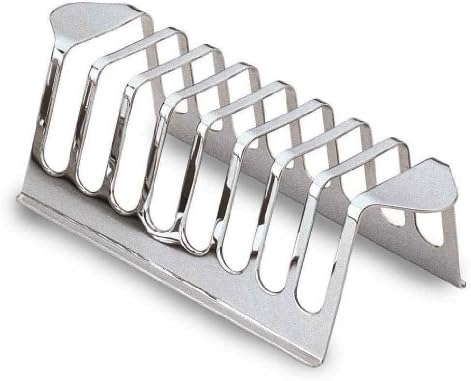 Great prices on your favourite Home brands, and free delivery on eligible orders.

with every alternate bar cut out (now it will hold 40mm thick steaks) to hold the food. Works for me.

I have been using a Rubbermaid 8 Qt square vessel with a tailored lid, and my Sous Vide Supreme rack will not fit in it. So I acquired a Cambro 12 Qt. rectangular box and lid, into which the rack fits nicely. I’d hoped that the Cambro lid with the sliding opening would work without cutting, but looking at the solid lid that I got with the box, Cambro’s pictures of the slider on their website, and the dimensions of the Anova mounting bracket, it seems clear that the slider would have to be cut as well.

So, unless someone reading this has experience to the contrary with the sliding lid, I plan to cancel the order for the slider and cut the fixed lid to accommodate the Anova to be mounted in the middle of the “short” end of the box. Comments would be appreciated!

There’s another great discussion about this topic in another thread that we’d love for you to join in on - check it out:

I’m going to go ahead and close this discussion so we can continue in one spot - to see the latest on this topic, see the new thread here: