I’m looking for some guidance on sous vide cooking a 4 to 5 pound Chateaubriand for the holidays. I’ve seen a few recipes for 1 hour at 130 degrees but for such a large portion of meat, I image my cook time would need to be 2 hours plus. Thanks.

Mbaynard, that’s a much larger Chateaubriand than i’ve ever cooked. That one hour of time was likely for a tenderloin steak. Cooking times due to greater mass or thickness requires a geometric increase in time. That means doubling the thickness of meat requires four times the length of cooking time.

I estimate (ok, - guess) that large a cut of thawed meat would require about 6 hours at 130F as long as it’s less than 3 3/4-inches thick at the large end. Anything larger than that will take too long. You certainly don’t want to ruin that much meat.

I’d consider using smaller Chateaubriands. That’s what i do for large dinner parties.

As you do more sous vide cooking you will find a washable ruler to be valuable in planning accurate cook times.

I just did a Chateaubriand from a whole tenderloin. I butchered it and used the center which was still massive. I cut it into 3 pieces and cooked them at 130 for 1hr. The varying thickness of each piece gave me different degrees of doneness, which worked well with my guests (a platter for each level). The thickest part came out perfect at medium rare and very tender.
The thinnest piece was medium and still fork tender. That was the end I was worried about. Cooking in three parts made it easier to sear as well.

I was wondering that exact same thing. I’m looking at a 5 to 7 pound piece of meat.

Some cooks evaluate doneness by touch or appearance, not internal temperature, so doneness becomes a somewhat subjective decision. Digital thermometers provide a very quick return on investment for anyone interested in accuracy and consistency.

I’m assuming that different textures/breakdown is what was meant.

How did you come up with the 9 hours. That is one long cooking bath.

Five to five and a half hours ought to do the job with completely thawed meat. Even with just a brief post-sear, that’s going to definitely be a very expensive medium done roast. 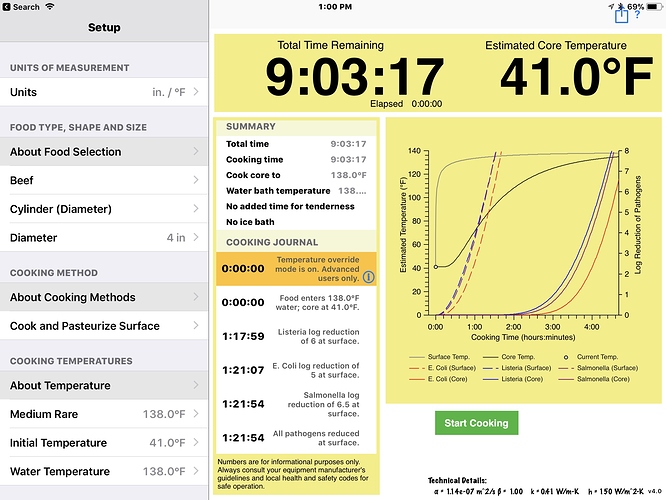 You need that core to be at temperature, cooking it whole is the difference. If you are doing steaks that are 1” should be 100 min.

Ok SutoJL, if its a matter of “need” for you to Pasteurize your cylinder of meat with total bacteriological kill to the core, that app is likely correct. How many months do you plan to keep that meat before you eat it?

However, this topic is “Chateaubriand”. Is that the cut of meat you refer to? For me, i would not enjoy the texture of Chateaubriand cooked at that time and temperature. As the app’s chart indicates, after 4 hours there’s been significant reduction of pathogens.

Of course, I assume your meat has not been “tenderized” like some of Costco’s and other sources. Beware of any meat that’s suffered from the use of the Jacquard tool that may push surface contaminating bacteria deep inside meat. If it has you should kill off all pathogens before consuming it. You can never be sure it’s safe. Meat’s core if left undisturbed rarely has harmful pathogens. Otherwise few of us would survive Steak Tartar.

Frank,
This is science.If you want your core to be at medium rare it is going to take over 4hrs., the app is based on the science of SV. As far as it being “Chateaubriand”, it’s meat and you can pick the temperature you want it served at. You could always get a thermometer and check it. Seems like you’re the expert anyway, just make sure you don’t kill anyone with your purple meat.

You are not being helpful.
You say I want medium rare. I do not.
And i certainly don’t require your admonishment concerning my guests well-being. Thank you.

I am not going to advise the users here to compromise culinary excellence for the sake of unnecessary science. Cooking a Chateaubriand for 9 hours at 138F would significantly degrade its texture. That tender cut of meat can be eaten uncooked, and often is.

Pasteurization is your option and choice.
I prefer delicious.

I’ve done it twice but they were only 2lb and 3lb each. I would recommend doing a test run prior to attempting such a large expensive hunk-o-meat.

I strongly suggest pairing it with the demi-glaze sauce referenced within that recipe.

Sorry for the late reply. Yes everything came out at 130f. With the three pieces I was allowed to let the sear go longer on the thinner pieces. Some people just don’t like pink, no matter what I tell them about foodsafe temps and “it’s not raw blood”. I could’t bear to ruin the thickest piece, so it was just a quick sear to add colour. But even the over seared pieces were tender. With one whole piece, I wouldn’t have that last minute versatility.