Yesterday I made a long cook and, since I had space in the water tank, I added a bag of bone in skinless chicken thighs that I cooked from frozen for a total of 3 hours “just to be safe”, so they’re pasteurised.

I then moved the bag in an ice bath for one hour and now the thighs are sitting in my fridge for later consumption (within 2-3 days).

I have now almost understood most of the SV cook things (I still have some doubt and insecurities though) but I’m missing one thing and it’s the SAFETY of the reheating process via sous vide.

Is it really necessary to reheat the food this way, apart from the controlled temperature?

From a safety perspective, what happens if I open the bag and remove my pasteurised food and leave it on the counter for say half an hour and then sear it in a hot pan? The food is already cooked and virtually 100% clean since I have stored it in its closed bag.

I had this doubt because I was thinking that reheating my chicken thighs to the cooking temp (74C) would take circa 1 hour based on their thickness and it would be more convenient for me to pat them dry and leave them on the counter for some minute and then sear everything in hot oil, definitely for more time rather than the “flash” sear I would perform with freshly sous vide made food.

Does the SV reheat have a safety purpose on already cooked meat or can I experiment with the “reheat in the pan” method safely? I mean if the worst thing that can happen is eating a little cold chicken (that has been cooked thoroughly) I can deal with this.

If doing this would cause health problems then it’s a no no of course, but first of all I need to understand the logic behind this process because that’s how my brain work. Yes it’s energy consuming but I can’t help myself. 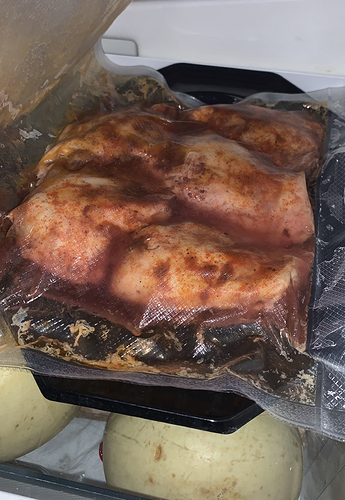 When you cook something sous vide, then shock chilled and put it in the refrigerator it can be treated like any other similar cooked food. With the added advantage that if you cooked it to pasteurization and left it in the bag it will probably stay “good” in the refrigerator for a longer time.
The reason that people recommend reheating using sous vide is that often you will cook food at a lower temperature in sous vide in order to have a result that differs from other “high temp” cooking methods. By reheating using sous vide at roughly the same temperature you initially used too cook your food you will maintain the result you were aiming for in the first place.
For example… You might cook chicken breasts at 145F until they have been pasteurized, then chilled and stored them. This yields a moister and in my personal opinion superior chicken breast than you will usually get when you cook the chicken to the 165F temp recommended by the FDA.
If you reheat using sous vide and set it at 145F (or even a bit less…you are just warming it up - it’s already cooked) the chicken will pretty much maintain the same moist and tasty characteristics as it had at the end of the initial cook. If you decide to reheat using some other method you may raise the temp of the chicken above 145F - thus changing its texture and moistness to something more akin to chicken cooked by “standard” methods. There’s nothing wrong with this if that’s what you want, but most want the reheated food to maintain the characteristics of their original sous vide cook.
Bottom line - the chicken (or whatever) you cook is simply cooked food! You could eat it straight out of the bag cold from the refrigerator if you wanted. (In fact, some people do shred chicken that has been cooked sous vide and chilled for various things like salads or sandwiches.) Treat food cooked sous vide and refrigerated the same safe way as you would any food cooked and refrigerated and you should be good to go.

Please let me know if I’ve been unclear. Others may be able to explain this a bit more clearly than this!

+1 to everything Mirozen said. The one caveat I would add is that, when you’re cooking food to pasteurization, that if you keep the bag sealed, it does last much longer than typical foods you store in your refrigerator.
Additionally, the numbers we’re usually talking about for food risk are the 2 hour mark (that’s for raw meats - pasteurized foods are safer…some use the 4 hour mark for those, but I wouldn’t be feeding them to anyone with compromised immune systems if somethings been sitting at room temp for 4 hours).
As you’ve done the most you can to minimize time in the danger zone (40F-127F), yes, you can comfortably leave the chicken thighs on the counter for a half hour with virtually no risk for food safety. If you are aiming to get a little Maillard reaction going on with some tasty oil (such as sesame), then I’d highly recommend you aim for a flash sear with dried thighs, to minimize the amount of time they’re subjected to the higher temps (as you don’t want to toughen those tender SV’d chicken pieces).

Thank you all for the explanations.

Ok so I did what I planned except that l didn’t use a smoking hot pan but rather a fairly hot pan because I had no idea of the result.

Grapeseed oil in cast iron and 1 minute and 30 seconds per side, not a lot of Maillard but they turned out warm. I ate the first and kept the other in the pan so they could stay heated.

So far I’m still alive, so I guess it worked. Next time I could use a hotter pan.