Can anyone provide some advice on combining sous vide cooking with a smoker? Say a sous vide recipe calls for cooking a brisket for 145F for 48 hours. Would you rub + smoke the brisket first until it gets to 145 and then bag and transfer to the Anova? Or would you cook it for 48 hrs and then rub + transfer to smoker? Once in the smoker, how long should you cook it?

Thanks, I’ve searched various message boards and recieved conflicting advice or people that were on the verge of trying different options, but can’t seem to find a consensus. Thanks!
fischersd March 31, 2016, 4:52pm #2

Believe it or not, but there’s decent liquid smoke out there (I was a disbeliever too, until I did a batch of ribs with my PC).  They were every bit as good as if I had smoked them for the 90 minutes I normally do.

The rest of my process was the same - do the rub, let them marinade in the rub for 24hours, then smoke/cook(in this case sous vide with 3-4 drops of liquid smoke in each bag), cook for 36hours, then either freeze or finish on the grill / broiler (where you sauce them up and cook until the sauce is thoroughly carmelized).
I used a lot of the pointers here in doing my ribs:  http://www.seriouseats.com/2015/09/the-food-lab-complete-guide-sous-vide-pork-ribs.html
Usually, you’re actually cooking the meat in the smoker, so I don’t see how using a sous vide could complement that process.  I mean, if you do a partial cook with the PC first, you’re shortening the amount of time that the meat would be infused with smoke…likely producing a less flavourful result.
If I was doing brisket, I’d likely do the sous vide method (with liquid smoke), then broil it briefly, just to get some browning action on the outside.
acs April 6, 2016, 7:56pm #3

I have to agree, I don’t think I’d bother to combine SV and a smoker. I’d just go with one or the other.  I personally was not impressed with the results from my experiments with SV & liquid smoke vs what I can get out of one of my smokers, but each their own.

I do however cook things like roast beef (chuck roast or eye of round) in the SV and finish sear them on a grill burning oak wine or whiskey barrel staves.  This also works well with tri-tip.
1 Like
acs April 7, 2016, 4:28pm #4

I’m going to revise my answer to “it depends”.

After looking around, I’ve noticed that there appear to be a number of restaurants that are using a cold or low temp  smoke at less than 130F (give or take)  of a a number of hours on meat before cooking it SV, then finishing on a grill.  Some even use a humidity chamber / steam oven as one of the intermediate steps.    Seems to be reserved more for the tougher cuts, brisket for example, that can hold up to the long cooking times and abuse.
Might have to try it.
morty2768 May 23, 2017, 9:14pm #5

Just checking in on this post. Have either of you reached a consensus about the smoking/SV combo?

I’m thinking about trying out some beef short ribs in SV first, pulling/patting dry, applying a rub and then “finishing” on Smoke in my Traeger. My only concern with smoking first and then SV is losing the bark/crust that smoking gives the meat. I’d love to hear some feedback on this.

Another group that I converse with regularly combine sous vide cooking with smoking. The consensus there is to sous vide first and then smoke for the fragrance and bark. Their reasoning for that order? The flavour and smell of smoking will permeate cooking bag, water bath and cooking room if pre-smoked.

I have yet to try it myself, I am intending to do some experiments combining the two processes in search of the perfect ham as hot smoking my home cured ham produces a texture that is firmer than I like. I’m chasing that lusciousness that I associate with ham.

Decided to play with combining smoke and SV, not to create phony BBQ, but rather looking at it as taking something that does well SV and adding a real smoke component to it, without changing anything else.

Roast beef. Already have this down and the SV does a good job of it.
I was afraid that the long smoke might overpower or get wonky in the long cook so I went with a cheap cut that I normally wouldn’t use

2.5 lb bottom round roast, well trimmed (remove all fat cap)
seasoning rub
6 hours on the traeger at “smoke” (around 175F ish)
bagged up in a vacuum sealed bag
24 hours SV at 134F.
No sear, left in bag until completely chilled.
Run it thorough the meat slicer and dust with some extra rub

This came out quite good actually, slight smoke, good flavor, tender without falling apart.
Next time I’ll use the proper cut, an eye of round roast. 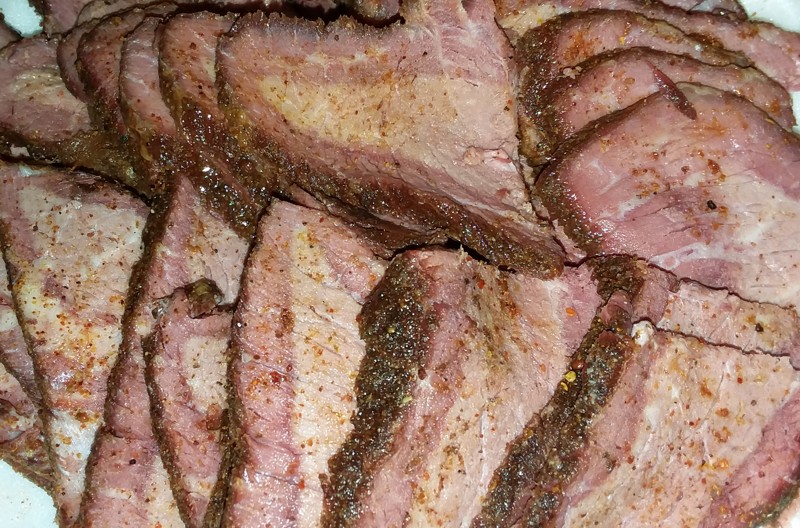 Wouldn’t it be easier to sous-vide it first?

I would cook it sous-vide first and cut the cook time by say, 25%. Just to give yourself a cushion so that you don’t overcook the meat. If the meat is thick enough, (roast) smoking at a low temperature for an hour or two shouldn’t have that big of an effect on the meats doneness.

The only issue I would be concerned about is that when you cook sous vide, there is a good amount of juice in the bag which you would loose if you then put it on a smoker.

If someone knows better, please let me know.

Wouldn’t it be easier to sous-vide it first?

I guess it’s not about easy or difficult. I do this all the time. I smoke first, sous vide then finish again in the smoker. It makes a big difference and I’d never sous vide first.

The reason for smoke first is that you can actually smoke for less time. All you want is to impart the smoke. Once you have some on the meat it will permeate the meat during sous vide.

If it’s a brisket I finish again in the smoker to get some fresh smoke and a little crust.