Steaks won't come out pink no matter what.

They have all come out medium well - well done. Although they are still very tender, there is no pink to them at all. They are browned all the way through. On 2 occasions the steak was pink (medium rare) near the edge on one side of the steak but only a tiny portion of it.’

I have no idea what I am doing wrong, could it be my pot is too small and one side of my steak is too close to the anova?

You’ll really need to share your whole methodology so that we can troubleshoot for you.

But… there are 2 things that are most likely the cause.

Searing is a skill that requires attention and practice. And thin steak shows up sear technique problems and so needs to be treated with care.

A third possibility is a very inaccurate temperature sensor in your APC, though one that far off seems rather unlikely. So, yeah…more details are needed.

Hey guys thanks for the replies. My way of searing is pan searing, I wait for the oil to smoke a bit then sear my steak for about 10 seconds each side. Although I have actually cut my steak before searing just to see if it was pink, and they are always browned all the way through. The steaks are 2 - 2.5cm thick.

I might have to get a thermometer of some sort to check the water temperare is correct.

Although I have actually cut my steak before searing just to see if it was pink, and they are always browned all the way through.

If they’re already brown all the way through before searing then that would seem to suggest that a wonky temperature sensor in your APC isn’t as unlikely as I thought.

It happens. The first unit I received was off by about 30F. The support folks were great and sent me a new unit which has worked flawlessly. Checking the water temp with other thermometers is a good idea.

Yeah, what @DParker said about it being brown all the way through before searing. I’d cut it to see how they look on the inside after you are done cooking them sous vide. That can clear some things up

I bought a thermometer, the water temp was correct.

Half was brown, half was pink. It’s very irregular. The photos are taken before the sear. 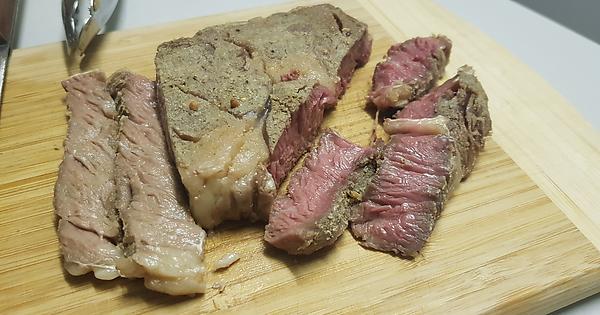 Hm, I am bit stumped. It could be a few things. One thing is that it could be that you may be searing on an uneven pan? I also recommend patting your food dry prior to searing. Also, what kind of cut of beef is this?

The pictures are before I seared. I cut the steak as soon as I took it out the of water bath. Its a scotch fillet

Its a scotch fillet

Question: Is the over-done portion of the steak sitting right up against the APC, where the temperature is likely higher than elsewhere in the bath?

That’s looking fine to me. You’re expecting the vibrant pink that you see in other folk’s photos. It will brighten in colour the longer it is left open to the air.

Don’t worry about the look of it, is the mouth feel and flavour right for you?

It looks to me that you are having a problem in your container. A circulation problem. Don’t let the meat rest on the bottom and don’t let it get to close to the surface. Put a rack on the underside and use some weight to keep the bag with meat down.
The water needs to circulate under and around the meat.
When the meat is to close to the surface it won’t get as warm as intended. I have encountered this problem as well.

I’m wondering if it’s the meat itself. With the water at the correct temperature I can’t imagine even a circulation problem causing this. Is all the meat you’ve tried from the same purchased batch?
Excellent idea taking the pictures “pre-sear” btw. If you do another test run could you include pictures of the meat “pre cook” as well?
Good luck!

Ah I completely forgot to take a picture for you guys to see the colour of the meat pre cook. But it is pink/red as you would expect from a fresh cut steak.

The steak is not near the unit where the water is likely to come out warmer, I made sure of this.

Yesterday I cooked a steak at 130F for 1 and half hours, I made sure it was getting water circulation all around the steak, I made sure it wasn’t near the APC unit and this was the result. Although it was delicious I still want that pink steak, for me it makes it taste better haha. 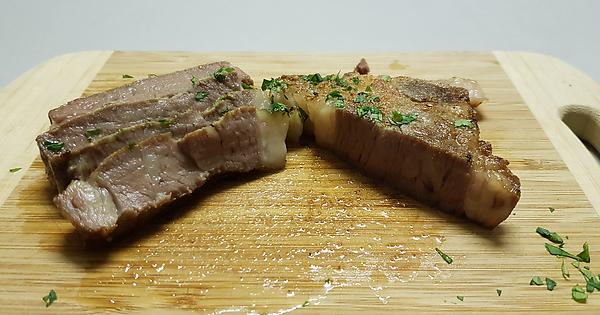 Dang @Bliss! I don’t see how this could be happening for you! It’s seriously weird!

I know you posted that you bought a thermometer to confirm that the temp was right, but I can’t see how the meat could come out looking like what’s in your pics when cooked at the temperatures you’ve mentioned. I’m racking my brain to figure out how it could happen, but I can’t come up with anything. (Reminds me of the Three Stooges, and Curly saying “I’m tryin’ ta think but nuthin’ happens!”

I’ve assumed these steaks are from cows…maybe I’m wrong?

Seriously though, this is a mystery to me.

In your first pictures, it looks like the steak cooked unevenly.

In the second picture, it looks over-cooked. Was it that way everywhere, or was there a rare patch like in your first attempt?

I can’t for the life of me see how you would get uneven cooking. Is the impeller on your APC working? You can easily find out by sticking it into a pot of cold water and putting your hand near the outlet. You should feel quite a strong jet of water coming from one of the openings in the plastic cap. (But, even with the pump not working, convection would even out the temperature in the container very quickly, so this is truly a long shot.) 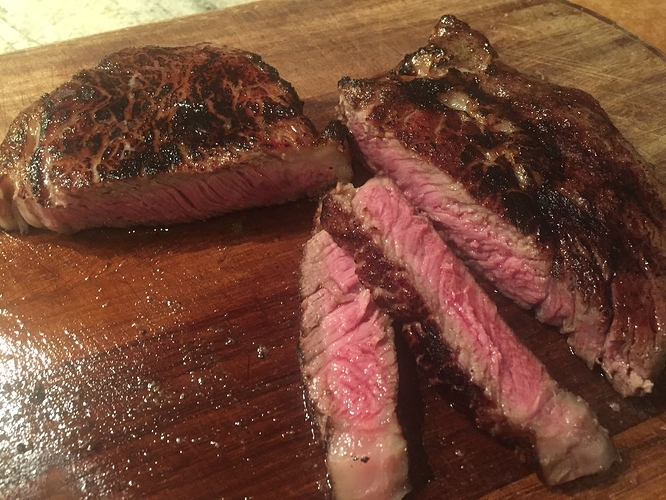 Same texture and degree of doneness throughout.

I have to say that the look is no real test of doneness. You would need to take a thermometer reading to prove that it is overdone.

I’m sorry, but there seems to be nothing wrong with the photo of your sous vide steak to me. The lack of the pink you expect can be due to the type of lighting your are photographing it under, or a low red sensitivity in your camera, or simply lack of oxygen and it will give a more roseate bloom as it is exposed to air for a longer period.

Looking at the images here:

It very much looks like one end of the steak is just right, and the other end is over-cooked. I don’t think that’s an issue with colour balance or some such.

Here is a NY Strip steak i cooked. Hope I can attach photo. Cooked one hour@ 130 degrees then seared in cast iron skillet for 30 seconds per side. 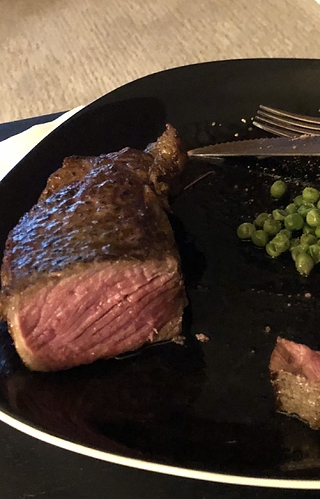