Why Cant i make good steaks?

I am pretty new to sous vide. Had my machine for a while but never have used it a lot. Everytime I make steak I am really dissapointed. I look at all pictures of medium rare steaks cooked sous vide and they look amazing. When I cook, they look very unappetizing. I can never seem to get that medium rare texture/color. I used a differnt thermometer to make sure the reading on the anova was the same and everything matched. Here is an example of a steak I cooked at 131 for 1 hour and just seared each side on a pan for 1 min on each side. 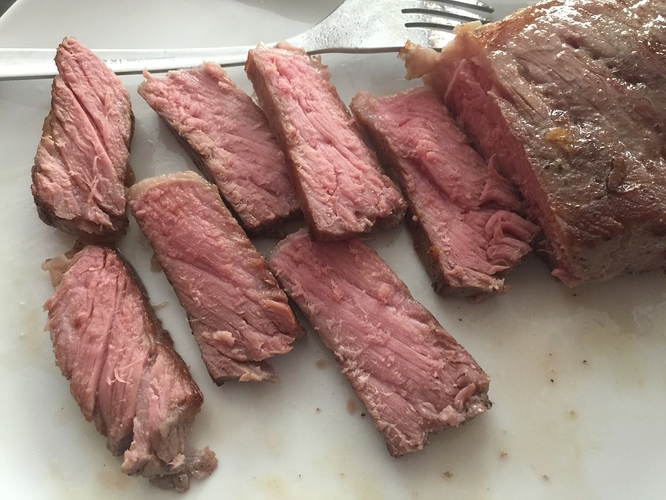 The picture looks more vibrant than what the steak actually is. It seems more like a well done steak that tastes boiled. Any ideas what I am doing wrong

Hmm, maybe try searing it for shorter amount of time? Make sure the oil is very hot, and sear it for 30 seconds each side. Also play around with the cook times and sous vide it for maybe 45 minutes instead of an hour.

Thanks. I thought the whole point of sous vide was you let it cook and you walk away and dont worry about it because it will never overcook. Ha! maybe i bought into the advertisement too much!

I can see the whip marks where the jockey was hitting that animal.

Try a better cut or better grade, or both, of meat. Also, try thicker, that looks like about 3/4". Way too thin.

Why the creep up the temperature scale over the 5 hours? Or are you suggesting trying 3 different cooks to compare the outcomes?

The enzymes in the meat that are responsible for the tenderizing that occurs during both dry and wet aging are very happy at those temps and will do a fair bit of work in short order to help tenderize the steak.

I can’t recall how I found the writeup originally, but I’ve been using those temperature steps method for about 1-1/2 years now. I don’t bother with a pre-sear though.

Sous-vide to the next level: tenderizing beef by ‘warm ageing’

Wow! I was reading the amazing set of books “Modernist Cuisine” by Nathan Myhrvold et al. and came across the suggestion (on page 3-78) to tenderize beef by boosting the activity of cal…

Be sure to pat the meat dry before searing. If you don’t, most of the searing time is used up getting the meat dry enough for the sear to start. Also, have the pan not just hot, but !!HOT!!

Heston Blumenthal did something similar in an episode of In Search of Perfection S1E3 Steak & Salad (https://vimeo.com/34158026)

Based on your photo, the first issue was about the searing stage, you didn’t get the maillard reaction, so no flavour. Probably the pan wasn’t hot enough.
You should try to,

Hey! You’re on the right track

The sear is a variable, from the looks of it, your steak is steaming instead of searing. This will cause it to overcook if you’re not careful. I recommend drying the steak REALLY well, and then doing as @AlyssaWOAH said and get the pan HOT and do 30-45 seconds a side. All the moisture on the steak is creating steam instead of that delicious brown crust. You’re sooo close! Let us know how it goes

Thanks all! Sounds like my finishing is the issue. I didnt realize searing would ruin the whole thing.

@Brian1 that’s brilliant, thanks. Someday I will have to try his method or adapt it in some way, I do most of my baking in a pellet grill (like a Traeger) rather than the kitchen oven, holding 122F isn’t going to be possible with the forced air burner.

That mushroom ketchup sounds incredible too.

If you’re going to try his method, it’s personally stick with the sous vide. There’s less chance of things going awry. The mushroom ketchup is fantastical, but it can go salty fast.

Although i have no trouble searing my meat afterwards, i do think sous vide steak often tastes “boiled”. The more extra liquid in the bag either from the surface of the meat or from freezing sometimes makes such a volume in the bag that the meat basically simmers.

I’d avoid frozen steaks, and i’d let my meat rest on the counter for a few, then pat it really dry before starting. I also think it comes out better with some added fat, like butter.

Either way, cooking steak right in my cast iron pan always tastes better no matter what.

At the temperatures used to sous vide steak you aren’t even remotely getting a “simmer”!

I’d expect that the thing that you are really taking notice of in a pan cooked steak is the likely more intense crust that you create. The perfect “doneness” throughout any thickness of steak I cook coupled with control of how tender it is (big point in keeping my wife happy!) is more critical for me than the crust, and getting a crust comparable to a pan fried steak takes some tricks. But as with anything you cook you should use the right approach to best create what pleases your own palate!

It’s impossible to overstate the need for a proper sear on a steak. The photo tells me you’re not even in the ballpark.
You can’t sear water, so the first step is to dry the surface of the meat.
Next, as has already been said, the pan needs to be HOT!!! (note the three exclamation points). You want to border on burnt, without actually crossing that line (proper grill marks are, arguably, burnt spots). Some will disagree, but cast iron is virtually your only option here, unless you have a ceramic infrared burner on your grill. Either one will get the job done. 30 seconds per side should do the job if the pan is hot enough.
Baste it with butter (compound or plain, whichever you prefer). Wait 5 minutes, and serve, leaving it sitting in the pool of melted butter you basted it with. You’ll cry with joy!
Another point that was raised above was the danger of overcooking the steak during the searing step. A simple way to minimize that is to let the steak rest until the internal temp just starts to drop before searing. 30 seconds in a blazingly hot pan won’t overcook it.