So I purchased the APO in March of this year(2022) and it is already exhibiting cracks and seems to be getting worse. I’ve reached out to support but I was hoping that the water tank issue was better but from my isolated incident, it doesn’t appear to be any better. 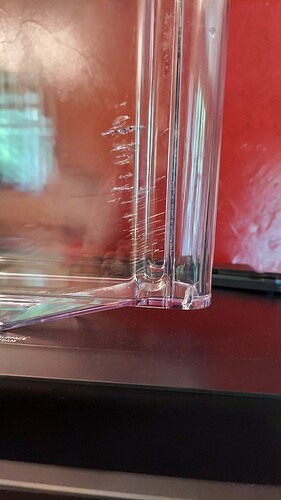 Is the cracking a material defect or a defect in appearance only?

Some research found similar defects called Environmental Stress Cracking, and noted that all amorphous transparent thermoplastics are susceptible and aggravated by common chemicals that might be used as cleaners.

In my work we were prohibited use of Simple Green® for it causing similar cracking in a transparent signal light cover.

I’ve never used any chemical in the tank other than RO water and have cleaned it twice with only a clean cotton towel. Baking soda to scrub the inside as needed.

It’s an issue that I thought and hoped had been addressed. I still have time left on my 90 days but I expect ANOVA to make it right.

This was basically information for a new buyer that the problem persists.

There’s no change in the water tank, the solution is the black sleeve that is supplied with new ovens and once they catch up with production they will ship the sleeve to everyone. In the mean time contact support, you will get a new tank, maybe with the sleeve. And the problem is thermal stressing due to the steam outlet placement.

Purchased 2 months ago there was no sleeve shipped with this new oven.

ANOVA support reached out and at this time there are no replacement tanks available but will ship one when they become available. I’m awaiting a timeframe so that I can evaluate my options,. The oven will become useless for my needs if the tank wall breaches which some of the upper cracks are much deeper than the others.

I got the sleeve with my second replacement oven a few weeks ago. To avoid a leaking tank while waiting for your replacement, look how people have modified it to insulate it from the hot steam, also consider removing it during high heat, no steam cooking.

The design issue has been fixed, but the parts you need are not all available right now. Have a look at this document:

Anova support will send you a new water tank on request, and they’ll also send the new cover and gasket when they’re available. The gasket is mentioned on p. 2 of the PDF and redirects steam away from the water tank. The tank is far enough from the oven itself, steam between the oven and tank is apparently causing the problem.

Interesting, I got the new tank with the sleeve but no gasket.
Thanks for the info.

Exactly my situation. Contact support and they will put you on the list to ship you the gasket once they’re back in stock.

Not to diminish the problem but I have a nearly 2 year old oven and the water tank has loads of those cracks. Looks like crap but doesn’t leak in the slightest. I’m sure you will be perfectly fine until they replace the tank.

When I first saw the then new APOven I read the spec as being a plastic tank & my heart sank, it had no visible heat buffer for the connections that were visible, & it was plastic in close proximity to a high heat producing machine, connected at the hip, you don’t put those clear plastics on a hot wash, or any wash within a dishwasher unless you want to weaken the stability of the plastic, which here is clearly the case, I’D HOPED that any sensible designer would have fought for better materials such as a silicone dampened pyrex glass type water container, but no, …any idiot could forsee these problems which have become synonymous with the APO.
Then to compound issues the fan problem, & this was from a product from new which by the nature of design & accountants typically get squeezed for cost cutting (profit) over the years …the panasonic dimension 4 is a good example between original quality back in the 1980’s versus the same machine now, we are into a failing 3rd gen unit, which started throwing up problems within 4 years of use, bulbs blowing, door code & release problems, dry solder (temporarily dead machine), poor door mouldings cracking at the interior edges, moisture on the led display, a penny shaved off for the display protector (no longer solid) ,our gen 1 worked flawlessly from the 1982 ? into the 2000’s ,the second gen until 2013 (panasonic hiatus till the 3rd bought in 2017 went wrong within weeks & has thrown up all sorts of “is it dying” !? problems since, it is with this prospect of info coming through an admittedly dedicated product forum that this far into its design life the unit is still “questionable” …I’m into energy efficiency & so heating up small spaces (which many cannot equate to energy savings compared to the cavernous void of a big oven) & it’s tech was appealing from the word go, …i’ve just bit the bullet bought an air fryer which upon inspection, was not worth £50, & i’m stuck, it is going back, I would still benefit from an ir fryer + all the other things but the APO is simply not up to scratch, the design marred by fans going wrong this early into its life, the haphazard nature of spares availability & a visible self repair handbook for run of the mill components like heating elements.

This combined with the proximity of so many electronics at the heat end (top) of the machine not apparantly insulated against premature heat death (just like a regular oven, which merely serves to add further energy losses, screws, to me what should have been a benchmark design that merely hobbles along now in the big catalogue of electrolux product.

Sadly, when visiting an electrolux factory in england a few years back they hadn’t heard of the anova brand, nor the APO, …& these were sales staff by association to anova within the conglomerate, this meant that repair & servicing would have been an unknown quantity & put me off further.

On the flipside, my anova sous vide has performed well, the wifi / bluetooth connection hasn’t worked for **** over the years & programming is a great cost fctor of design & final price, with that in mind i’d be a fool to buy the APO.

(I come from an electronics production & service design & troubleshooting background having had to mop up problems left when a designer has moved onto his next ego driven & marketed product design, leaving the apologies & fixes to poorly recognised service departments who have to redesign & make good on the hoof whilst never receiving plaudits, because screw ups aren’t good for business, …s o avoid making them from the word go!

PS never excitedly buy the first few runs of a new product, you are a test bed for in field design & production learning via early sale stage returns!