I decided to do pulled pork for my wife’s birthday get-together today using my tried-and-true 165°F/24 + 4 hrs smoker time routine on a whole 9 lb boneless pork shoulder. Due to tiiming considerations, I decided to try starting it 12 hours early, and then dropping it to a holding temp of 140°F after the first 24 hours…hoping that the lower temp would allow the meat to hold together.

Nice try, but no cigar.

The shoulder came out of the bath at 8am and promptly fell apart on the cutting board I put it on to apply the spice rub. So I had to scoop up the pieces, put them in a large stainless steel bowl, pour the rub over them as best I could and put the whole thing into the smoker. Hopefully the pork will still get sufficient smoke exposure sitting in a bowl.

Next time I’ll just fight the laziness and get up at the crack of dawn to start the SV stage instead of doing it the night before.

Better yet. Do the SV stage a day or two before when it’s convenient for you, shock chill the meat and shove it into the fridge to hang out for a bit. Then when you’re ready for the smoke up, take it out of the fridge, wipe it over and give it the rub before putting it in the smoker.

Smoke sticks best to things that are cold and damp. And having your meat at fridge temperature will also give it longer smoke exposure before it’s back up to temperature.

Do the SV stage a day or two before when it’s convenient for you, shock chill the meat and shove it into the fridge to hang out for a bit.

I’d have done that, except that the fridge was already close enough to capacity that there was no spare room for a 9 lb shoulder. And I’ve found that I get plenty of smoke flavor after only a few (3-4) hours even when going directly from the SV to the smoker with no meaningful cool-down period in between. That was especially true in this case because there was so much more surface area exposed to smoke due to the shoulder having broken down into so many pieces, even with some of the surface being in contact with the bowl.

I did something similar with a (bone-in) shoulder. I cooked mine, from frozen, at 60°C (140°F) for 36 hours and it was great after a few hours finishing it on the BBQ. I wasn’t really going for a pulled pork texture though.

So @DParker - after having it fall apart and having to put it into a bowl for smoking how did it turn out taste and texture wise? I assume it got enough of the smokey flavor based on your response to @Ember about so much surface area even though it was in the bowl, but overall did it come out tasting good and was it still a good eating texture?
btw - A few years ago I bought a couple little “bbq grill cages” (much like the picture I’ve posted here) that worked pretty well holding things together in the event things got a little “over tender”. Have not needed for anything I’ve cooked sous vide, but seems they would have worked quite nicely for you in this instance. I don’t know how often you might find a use for something like these cages, but I personally have found them very handy at times (especially for salmon!). 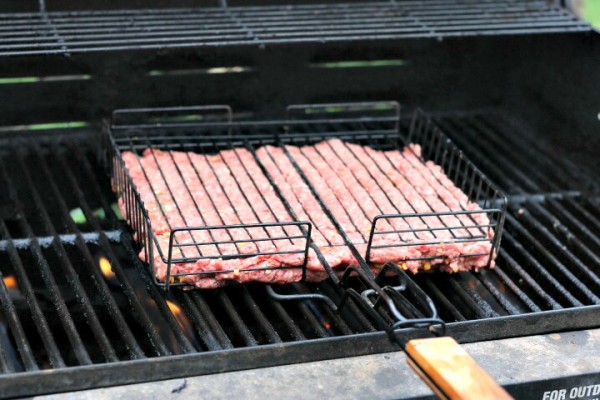 but overall did it come out tasting good and was it still a good eating texture?

Yes, it was very nice as pulled pork. It wasn’t quite as moist as my previous SV+smoker shoulders, which was to be expected. But it wasn’t even remotely dry.

As for the grill cage…the shoulder’s structural integrity was so minimal that meat would have been falling out of it. They’re great for fish though.

As for the grill cage allowing things to fall through… There are any number of current bbq grill cages or baskets that might work better, but I’d use a stainless steel mesh frying pan splatter shield…