The guys over at Guga Foods (an offshoot from Sous Vide Everything youtube channel) just recently did an episode testing cooking steaks with regular vs clarified butter. While the test was interesting, what caught my eye was the first part where they show how to make clarified butter using sous vide. In a nutshell, you put the butter in a vacuum sealed bag and cook for 30 mins at 185ºF. Then gently remove the bag and pour off the clarified butter. It appears that you don’t have to deal with any of the foam that typically rises if you’re making it the traditional way of cooking on the stove top. I’m excited to try this method since I use clarified butter a lot and find that it’s a hassle to make.

Another way to clarify butter easily is in the microwave. Put the lot into a glass dish and heat slowly at a really low power setting. It’ll settle out beautifully without any bubbles.

I generally don’t bother making it though and use ghee instead. Ghee is clarified butter that has been cooked a bit more after all the water has been driven out. It has a slightly stronger flavour. It’s available at supermarkets and Indian food stores. Usually sold in cans, it lasts for many months without refrigeration.

Thanks. I’ll give your technique a try first. I’m familiar with ghee but prefer the cleaner taste of clarified butter. Plus it’s cheaper than buying it in the supermarket.

When I first read the title I imagined doing this in a small mason jar. I’ve now tried it in a 1/2 pint jar with good success. It seems more gentle and controlled than using a microwave. I’ve done it that way also. I can never remember how long my machine takes. Sometimes I’ve had butter splatter all over. Sous vide makes it easily controlled.

I can never remember how long my machine takes. Sometimes I’ve had butter splatter all over. Sous vide makes it easily controlled.

Microwave ovens can’t actually be adjusted for real power output. They always go at full output, and the lower power settings do their thing by varying the on/off timing ratio. So, when using a microwave, you have to go slowly, in shortish bursts at a very low power setting (100 W or so), about a minute or two at a time. If you are careful, it works perfectly. It saves me having to set up the sous vide thing first. If I want clarified butter in a hurry, I use the microwave. If I have time, I use a pot on a stove.

I have to admit that the sous vide thing sounds good though. Largish mason jars would make this really easy, and the timing won’t be critical.

Odd. Clarified butter has all the water evaporated as well as the milk solids. Don’t see how cooking in a closed bag could evaporate the water.

I’m not sure where you’re getting your information from, but clarified butter should not have milk solids. Its not required to have the water evaporated, just removed. It sounds like you’re describing brown butter which is a different animal. Classified butter is pure butter fat, regardless of the specific method you use to make it.

I agree. That’s what I said in my post. Clarified butter has no milk solids and no water. I doubt that heating butter in a sealed bag will allow the water to evaporate.

I misunderstood what You had there, it looks as though You were keeping your milk solids, apologies. You don’t need the water to evaporate. With the method described above, the water will separate from the fat. Then, you either pour the butter fat off, or throw it in the fridge. Once the butter cold sufficiently, the fat will be solid and the water liquid: and you just discard the water. It doesn’t need to evaporate, it just needs to be removed.

I’m guessing the water will be trapped underneath the solidified butter fat?

Yup! Cool the fat, poke a hole in it, pour out the water

I usually clarify butter by using 2 lbs. at a time in a pot. Can I do 2 lbs of butter at a time sous vide and would I still use the temp 185F/30 minutes? I make clarified butter a lot and to me this would be easier

I’ll be trying it this weekend with at least a pound. For more butter, I’d just go 30 minutes and see what you get. If not completely separated, just put the bag in for 15 minute additional increments.

OK–this is now my go-to method for clarifying butter. I did a pound of butter and when transferring to a container, I went “belt and suspenders” and filtered it through some cheesecloth as well as the sieve. Definitely overkill as the butter was completely solids free. I was so pleased with the result, I immediately started on another pound since I had the water bath at the correct temperature.

I think not quite true. I have an inverter Uwave oven. Rather than switching on full power then off, it actually is supposed to drive the magnetron at variable powers and cook faster or slower.

It is moderately successful. I am not sure why not more. But it is certainly more controlled than switched unit, which yeah, will simply blast and stop, causing local singeing.

I found the incredibly inexpensive fine mesh stainless skimmer at a Korean grocery in Atlanta. It’s been an exceptional find - looks identical to this: 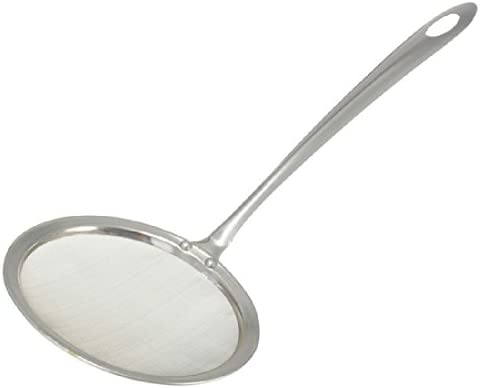 Actually there is a type of microwave that does do this. You need a microwave with an inverter which regulates the power output. Panasonic and GE make microwaves with this ability. I highly recommend it, it makes melting chocolate and thawing frozen food very easy.

Actually there is a type of microwave that does do this.

Yes, as was pointed out earlier:

I think not quite true. I have an inverter Uwave oven. Rather than switching on full power then off, it actually is supposed to drive the magnetron at variable powers and cook faster or slower. It is moderately successful. I am not sure why not more. But it is certainly more controlled than switched unit, which yeah, will simply blast and stop, causing local singeing.

Most people (99% plus?) don’t have a microwave with an inverter though.

Yeah I saw that as well after I posted. Left it up as I mentioned brands. If you cook you owe it to yourself to get one with an inverter.

For the sceptis, this is the most controlled method, as there is a 100% separation of fat (ghee) and milk water. The water will not be evaporated as it is under boiling temp., but there is a white fluid left behind. The nice thing is that since this is heavier then the fat, it will fall into the bottom of the bag. I just cut the corner on the bottom making a small hole, hang the bag and the white stuff will pour out first. Then I put a can under and the perfect yellow ghee comes out next. I consider method the most easier and convenient as one may never fail and the outcome is the same perfect butter fat, never burned an sould not be supervised.