I’ll be making a chateaubriand for the third time this Christmas Eve using my Anova. In the past I got to my relatives house ahead of time to start the process and cook entirely over there. This year I can’t do that, I have to arrive later and within about an hour of dinner time. I am thinking about cooking ahead of time at my house for about two hours, placing in a small cooler to keep temp and driving 40 minutes to my relatives to begin cooking another 30-60 minutes almost immediately upon arrival. In total there would be about an hour gap at most. Would this work and or be safe?

It sounds like it should be. What temp are you cooking at? (the general guideline is that you don’t want your meat to be in the danger zone for more than 2 hours). 40F-129F being the danger zone.
You could go the extra step and use the cooler you’re planning on using for transport as your cooking vessel - so that way the cooler and its insulation should be warmed up to minimize the heat loss during your trip.

133.5 is my cook temp. I don’t think I could continue the cook in the cooler but I would probably wrap in a few towels at the very least.

Have you considered setting everything up over at your relatives house the day before, with the vacuum sealed meat in their refrigerator. The next day they plop the bag into the bath and hit the button at the appropriate time. When you arrive the food can be ready for you to take it from there.

Of course this only works if your relatives live close enough.
Good Luck!

Rob, keep on thinking about cooking ahead at your house, but do it completely. With a bifurcated SV cook you give up temperature control and that creates the need for your undisclosed contingency plan to achieve on time service.

Here’s your challenge, unless you have a particularly small Chateaubriand your cook plan is skimpy on time and the secondary cook at the dinner site creates several potential problems. Meat in transit will suffer a drop in temperature that will need to be replaced before cooking can resume. You don’t appear to plan for that.

I would completely cook the Chateaubriand.
Don’t decant it, you need all the mass possible and the least amount of ambient exposure to retain temperature.

Prepare the following before getting ready to leave:
Small cooler half filled with boiling water with lid on.
Large rectangle of HD aluminum foil, folded in half to receive the meat directly out of your cooking vessel.
Two bath towels to enclose foil-wrapped meat before placing in heated and thus waterless cooler.

You can figure out how to proceed from this point.
Make it a great Christmas!

Here’s a new wrinkle, my tenderloin is 6lbs. Do I cut in half and or is 3 hours still enough?

Don’t know about the 3 hours, particularly if you intend to have interrupted cooking for logistical purposes. Otherwise, might be.

That would be just about right for a 2 1/2 - inch thick Chateaubriand with a continuous cook.
Now you have switched to a whole tenderloin.

It was my opinion you were skimpy on time, but without any knowledge of the tenderloin’s thickness the cook time can’t be accurately determined and i don’t like guessing.

If you are aiming for precision in SV cooking with your Anova you must base cooking time on the tenderloin’s thickness.

Depending on which way you cut it in half, what will the resulting thickness be?

If you are pressed for time, have you considered individual Petit Filet Mignons for the relatives?

I only say tenderloin because at 6 pounds I think it’s mostly the center cut with a little extra trussed on to it. At its thickest it’s about 4 inches. As far as time I have plenty if I do the entire cook at home and keep it warm and bring it over. I may throw it in a bath when I get there to keep it warm before finishing to serve. My general plan was, per sear, bath for 2.5-3 hours, transport, back in bath for 30-45 minutes, post sear, serve. Still wondering if cutting in half and doing two 3lb pieces would cook easier then this 6lb monstrosity.

Whether to cook it in one or two pieces would really depend on how big your immersion bath is, and how you were planing on searing it. If your bath is large enough to accommodate it in one piece, and the same for your searing method, I’d say leave it in one piece. If not, cut it in half. I don’t thunk it’s would be more difficult either way.

Searing would be much easier cut in half. I am gonna have to use one side of my sink as I don’t have a vessel big enough in either case. If I left it whole I have a large griddle I could use but not sure it would give me the searing heat I need

I think you just answered your own question then.

Rob, it appears giving you advice is a waste of my time and effort.

Do as you will do.

I very rarely quit, so here’s one more suggestion.
If there is an oven available at the relative’s call them when you are leaving your home. Plead with them to center a rack and preheat it as high as possible, 500F if they need a number. Sear in the oven, it will simplify wrangling your monster.

Hope the photo upload worked. But here’s the recap:

Decided to cut in half for searing purposes and fit in my vessel (sink). I did a quick pre sear with salt and pepper and some butter in my dubeyer iron. Great pan to sear in. They then got vacced and went into the bath at 1:30 at 134deg. At 4:30 I pulled them out, wrapped in HD foil and a hot towel and placed into the cooler. They went back in the bath at 5:32 at a starting temp of 129, got up to 134 at 5:50 and out of the bath at 6:50. So in total, they cooked just over 4 hours and at 4” thick I think it was spot on. They were still very hot after the transport in the cooler. Franks tips worked very well for that. A few minutes post searing and I carved them up. Perfect color and temp in my opinion and everyone raved about how good it was! All in all, a great success! Thanks everyone for the help and discussion. Hope you’re all having a Merry Christmas! 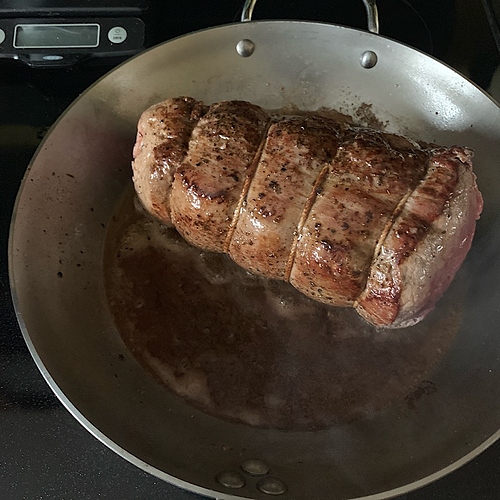 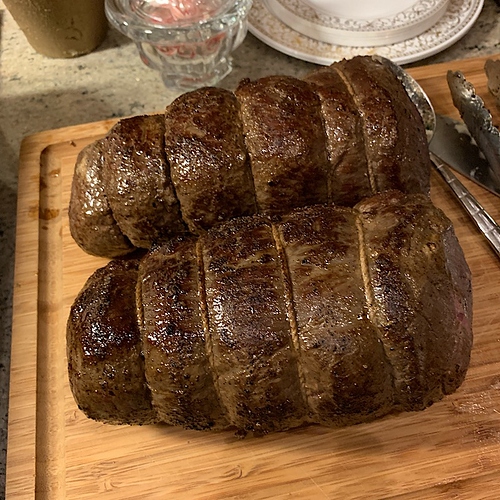 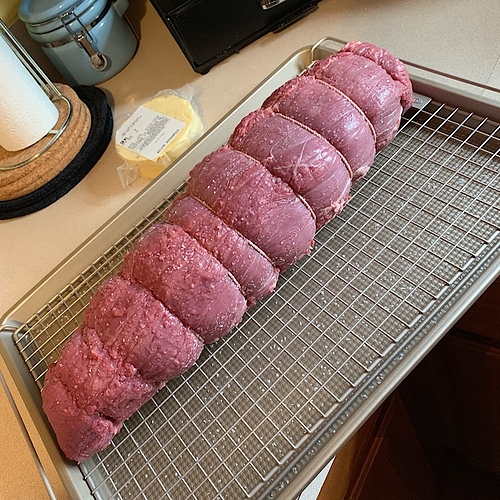 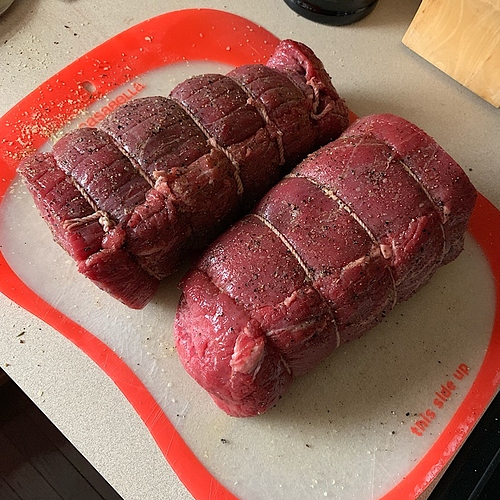 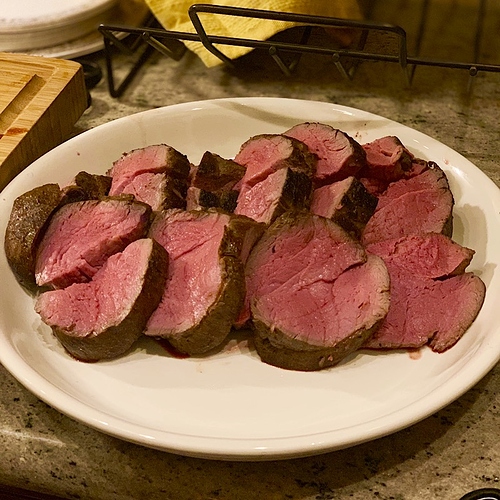 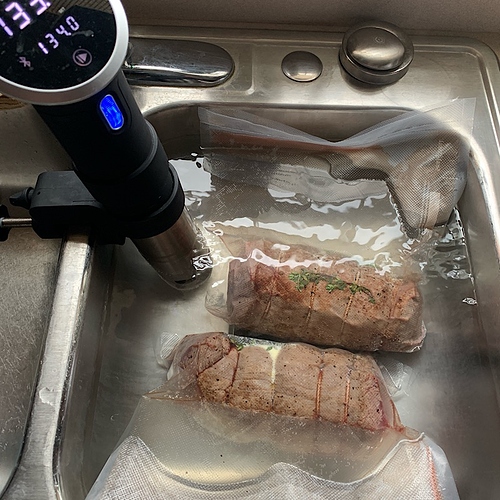 Looks great! Thank you for sharing with us.