I recently bought an Anova and I haven’t used it to cook anything yet but I’m trying to figure out its limitations. So my question is; Would it be possible to cook meals you’d typically cook in the crockpot? For example if I attempted chicken fajitas and threw chicken, onions, peppers, and whatever seasonings/marinade together would it turn out properly? Or is the sous vide really only used for cooking individual meats and vegetables?

I’ve had good success doing Adobo pork belly with the Anova. Prepare the Adobo sauce up-front, just using the usual recipe and a pot, and brown the pork belly cubes in a pan. Then put pork and sauce into the water, 24 hours at 70 °C. Was very happy with the result.

I’d say that almost anything that you can do in a crockpot could also be done sous vide. Main issue is that most crockpot recipes involve a lot of liquid, so you may need the immersion method or freeze things before vacuum sealing.

the most significant difference between cooking in a slow cooker and a sous vide is at the food in a slow cooker is in one solid volume. Was sous vide’s it’s better to not have the container too thick so that heat can disperse better. just using multiple bags would be an effective solution for that. that’s more of a hassle than just dumping the entire volume in a crockpot. But the vastly superior temperature control of sous vide’s plus the elimination of any possibility of evaporation have been extensively proven to give vastly superior results.

You raise a really good point that there’s a market opportunity for someone to create a container for sous vide cooking that would provide even heat, but a larger volume. (thinking some sort of an interesting modern design out of polycarbonate - something all twisty, but with a 4" diameter throughout) - leveraging the size of a lot of the larger sous vide vessels that we’re using.

(I’m selfishly thinking of the lamb recipe I got from Chelsea Winter’s site as I’m writing this). Haven’t yet tried it sous vide as I think it’s problematic to do so with multiple braised lamb shanks).

Succulent, meltingly tender lamb shanks that can be made in a slow cooker or an oven. The only lamb shank recipe you'll ever need - it's to die for!

I’ve made that recipe likely a dozen or more times in my slow cooker.

(yes, now I have a craving for it) sigh

Hmm. Maybe my wide-mouth mason jars might just be the “fix” for this. Methinks an experiment may be in order.

I was personally thinking about blanching vegetables and vacuum marinading/pre searing meat prior to sous vide. I would think this would do two things; One, reduce bacteria prior to vacuum sealing thus causing an extended shelf life in addition to being frozen and potentially benefit limiting bacteria growth during sous vide. Two, I wouldn’t have to worry about my meat cooking prior to my vegetables cooking throughout thus only having to focus on the temperature the meat needs to cook at.

Do any of you have any experience with what I stated above or any additional thoughts?

Let me know how those lamb shanks turn out if you attempt to sous vide it!

The great thing about sous vide is how precise it is. I highly recommend anyone/everyone keep a journal, so you can come back and reproduce the same results (or tweak them a bit more to your liking). Often difficult to remember exactly what you did previously when several months have gone by.

If you look at that lamb recipe that I posted, I’m basically going to take the slow cooker portion and replace it with the sous vide. Everything else will be identical.

What I’m thinking is that I’ll do 2 lamb shanks (each approx 1lb in size) into two 1 litre mason jars. Put the shanks in meat side down, then fill the jar to about 1" from the top with the sauce. (may even be enough sauce to do a 3rd shank - we’ll see.

Then I’m thinking 2-3 days @ 135F (haven’t decided yet) - I’ll do some more googling for sous vide lamb recipes. 2 days may be lots. Don’t want the lamb so tender that it has the consistency of warm brie…that just wouldn’t do.

Edit: What I do (so I remember) - I use the Paprika recipe app a lot - I have a sous vide category - and just make my notes for each recipe in the notes section - also going back afterwards to record how well that technique did and what I’d try next time.

Ok, this was the first attempt. Toying with next time turning the temp up a smidge. They were nice, but not quite as “falling off the bone” as the slow cooker version. I did them at 145F for 51 hours (would have been 48, but started earlier in the afternoon).

So, I gambled and put 3 shanks and all of the broth and veggies into a ziploc freezer bag (and said a little prayer)

Good colouring and very tender. As the vegetables (carrot and celery) weren’t cooked through, I decided to transfer the whole thing to my covered frying pan to simmer for 30 minutes.
Pic of the meat: 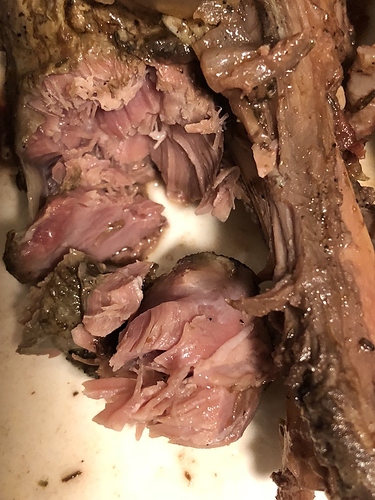 Looking forward to the leftovers for a couple of meals.

Why not use a Dutch oven, in a 225 degree F oven, for as many hours as it takes?
The Dutch oven allows you to brown the meat and saute the aromatics, enhancing the flavors.