Has anyone else noticed their oven seems to develop a food smell that it just won’t let go?

Hi Joe. Yes, my APO has a noticeable smell that varies depending on what I’ve been cooking and how clean it is. It seems like a normal sort of greasy, stale cooking smell and not horribly offensive, but stronger than any lingering aroma in my large oven. In the APO it’s definitely less after a good cleaning, which requires about an hour’s work with Heavy Duty Easy Off spray. I’ll attach a before and after photo of the process. I recently made the mistake of doing chicken wings, something I’d been planning to try for a while; but I foolishly chose the day after cleaning. Yikes! What a mess! The entire inside of the oven was again coated with grease, including the top which is the hardest to clean due to the exposed element. I had to clean it all over again, and I think I’ll leave so-called “air-frying” chicken wings to the restaurants! I believe we’ve had our ovens for a similar length of time and I can see that black greasy gunk is building up on the back wall behind the convection fan. It’s not possible to reach it for cleaning, but it’s visible through all the little holes in the back wall. I suspect that is where the smell is coming from. Sometimes the fan “blows” and sometimes it “sucks” (as evidenced by the behaviour of a piece of parchment paper in the oven), so the steamy air with grease in it obviously gets pulled into the space between the inside back wall and outer back wall of the oven, where it sticks to the surfaces and builds up. After I clean the oven I usually run it a while with no food and set it to 212F - 100% steam for 15 or 20 minutes. That results in considerable water pooling and dripping throughout the oven and it’s always dirty water, so I believe it’s leeching some of the grease buildup (from somewhere?) and once I’ve wiped it all up, I feel like that helps keep the whole thing a bit cleaner. It might be helpful to remove the inner back wall of the oven to clean behind, but I’m not about to try and take it apart and from the look of things, I think the wet bulb on the right and the two temperature sensors on the left would prevent it from coming out anyway. I still love how it cooks, but this oven definitely has some challenging characteristics! How did your descaling go? 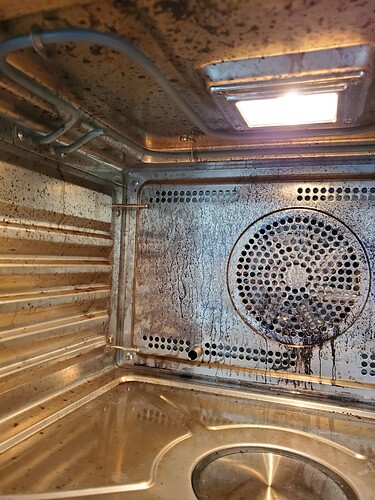 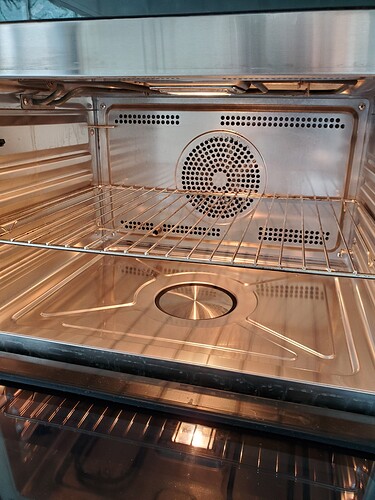 The descale went without a hitch, thanks for asking!

I suspect you’re right about the source of the smell being behind the fan. I didn’t realize the fan went both ways, but that would absolutely make sense. Per your recommendation, I just started a steam clean, but the oven itself is pretty clean, as you can see from the attached photo. 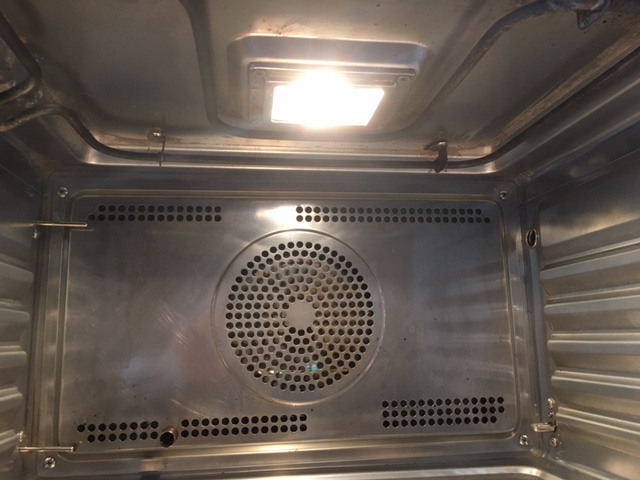 Thanks again for the response and suggestion!

Hi Guys, remember earlier discussions about perforated pan inserts and their usefulness with greasy foods when convection cooking? Those pans won’t eliminate greasy air flying around your oven, but they will substantially reduce it and eliminate a few cleaning sessions.

Happy, the 100% steam will purge a of the built up gunk as long as it doesn’t become polymerized or hardened. When you let it go that long you need the caustic or oxalic acid clearer. Baking soda is an excellent and inexpensive grease cutter too. When you oven clean with one of those chemicals its best to run a short 100% steam cycle after to rinse the oven down.

Is the APO’s fan switch double pole/double throw? That’s the only way i know how to reverse fan direction. It’s unusual to see oven fans running in both directions. They usually direct the air over the elements and into the cavity, not the reverse.

Although i did once have an installation of a bank of six new convection ovens with all of them running backwards because the electrician reversed the wires. How’s that for defying the laws of probability when there’s an even chance of getting it right?

Convection ovens are a lot more effective if they aren’t sucking air out of the oven cavity, heating it, and returning the heated air through the top and side vents.

So I ran a two-stage steam cleaning – 15 minutes at 212/100% followed by five minutes at 212/0% to purge the steam. Gave it a quick wipe down after that, and the smell is much dissipated.

Hi Again Joe, Chat et al. Everyone’s input here is always so helpful - thankyou! I’ve now learned a bit more about the fan and I was wrong with my comment about it switching from “blow” to “suck”. Being wrong is nothing unusual! I had been chatting with Anova about it, and was just told the fan only goes one way. So I spent more time with a piece of parchment paper to try and figure out what’s happening. What I now believe is that the fan pulls the air from the oven (“sucking”), based on the fact that a piece of paper gets sucked up tight against the round circle of holes directly in front of the fan blades. Then that same air (I assume it’s the same air) is “blown” back into the oven cavity through four locations at top and bottom right, and top and bottom left, through the two rows of holes on the oven’s back wall. That seems to make sense, since I understand the purpose of the convection fan is to circulate the air in the oven. It would also help explain why some people have commented on “hot spots” in the oven because I can feel that where the air is being blown into the oven right in front of those hole locations it’s very hot. That’s why most of us are finding it necessary to rotate loaves of bread to achieve a more evenly browned crust. It also explains the suggestion from one baker to locate a steel for baking bread on the second row up, instead of the bottom. That avoids very hot air blowing directly onto the loaf from the bottom two sets of holes because they will be below the steel. For my most recent bake I did that and it helped, though I’m still fiddling with other settings. On the fan direction, I was surprised when I first discovered it “sucks” because I assumed it would be “blowing” and I wondered if perhaps the blades had been inserted backwards (along the lines of chat’s wrong wiring story). But after reading chatnoir’s closing comments about convection ovens, I now think the APO must be (by design) sucking the air out of the oven and returning it (re-heated?) back into the cavity through the top and bottom locations. And chat, I have tried baking soda with little or no success; I’ve also tried a steam run after a cook to try and prevent a lot of gunk build up, also with little success, because a hot cook has already hardened it on the oven walls. (And I do use a perforated pan.) So, alas, I resort to the chemical products with mask and open windows, and do a good spray wash and steam afterwards. It does the job! Regarding the gunk that I can see building up behind the oven wall in the fan area, I’m thinking that a removeable and washable, steel mesh screen over the fan area (like what the Miele combi oven has) could be an excellent improvement. I’ve suggested that to Anova, but no idea if it might be considered. Staying positive is one of my top priorities! And Joe, I’m glad if the annoying smell is dissipating. Your oven is amazingly clean - you must use a LOT of baking soda!

Here’s a trick I use often in my commercial microwave and my APO, to loosen the baked on splatter.
Take a 2 cup Pyrex glass measuring cup, add 1/2 cup distilled water and 1/2 cup distilled white vinegar. Put into oven and crank up the oven to a temp above the boiling point of water and let the oven run @ “0% steam” until the water boils away.
Then let oven cool a bit and use “Cameo or Bartenders Friend” on a damp rag until the Stainless is clean. Wipe dry.
Do this when needed. I have resorted to cleaning with a damp rag after each use…my APO always looks new with out the cooking smells.

Fantastic – I’m going to try this!

How long does it take to boil out? I expect I don’t have to wait until it’s all gone, just most of it, yes?

Thanks for asking Joe. At 450° the water/vinegar solution should take 45 minutes to one hour to evaporate…watch out for the liquid to disappear.
Allow the oven to cool and use oven gloves to retrieve the Pyrex measuring cup…that’s it. Good luck.
Repeat if necessary.

So my oven is new. Only one long 36hr cook (of Chuck). After the cook, there was a lingering smell. I cleaned oven. Still the smell remained even after I left it open to “air” out for days. Today, this is what I did : Cut up one whole lemon, cut skin off at least half the lemon, put in medium sized, oven safe mixing bowl, filled bowl about 1/2 water and about 1 tablespoon of baking soda, added 1 tablespoon of actual lemon juice. Put bowl in APO during preheating to 212F / Only 80% Steam because I wanted some of the ingredients to evaporate and “absorb” into the air of the oven [places I can’t reach]. Boiled this mixture for about 25 minutes and then put it on 100% Steam for another 10 minutes. I removed everything from oven, except the rack and the bowl before preheating. After this was done & oven was turned off, I let oven sit open with bowl still inside until all was cooled off. Wiped down oven with Clorox Scentiva [Pacific Breeze/Coconut] to remove any remaining dampness/steam water. Passed several sniff tests over several periods after finishing. Now, this might need to be adjusted for how unclean the over started out, but … this worked for me under these conditions.