So, wondering if anyone can provide some advice on improving the results when making well-marbled ribeye steaks. I tried yesterday, and I was not happy with the results. They were rather thick (1.5+ inches) and had plenty of fat marbling. I had them at the water at 139.5F (for medium doneness). However, when I took them out, seared them in a hot skillet with oil, and then served them the texture was not what I had come to expect from ribeye steaks. Granted, they were very tender (practically able to cut with a fork), but the buttery taste of having a marbled cut of meat was gone.

My only thought at this point is that I had them in the water too long and all that fat got “melted” out of the meat. I think I had them in there for a 2.5-3 hours. Has anyone experienced this before? Had I done the 1-hour minimum, would I have been able to keep the pockets of buttery, flavorful fat in the steaks? I did find a couple bites along the edge of my steak that still had some fat that had not melted away, and those bites were amazing, so I’m fairly confident my guess is correct (that I melted away all the fat).

Hey @Sir_Raath! I think your time is pretty spot on for a steak that thickness. You could prob go down to 2 hours and be fine as well. I might try 135 next time as an experiment, and really focus on the timing of the sear. A lot of issues stem from searing too long which can maybe overcook the steak a little. Sometimes you just get a weird cut of meat too that doesn’t want to cooperate!

TL;DR: You shouldn’t need to worky about “overcooked steaks” with sous vide steak above 130F. The texture just becomes softer and mushier. Have you tried other temps?

Kenji’s sous vide rib eye tests found that 2.5-3 hours shouldn’t negatively impact the texture of sous vide rib eye steaks. Have you seen this buttery taste at the same temperature with a different time? With precision cooking time isn’t as important as temperature. Not watching cooking time is my favorite part of sous vide – there’s little difference with leaving food in the cooker for an extra hour. On the other hand, I promise you and your guests can taste the difference of a few degrees.

On a related note, as @colewagoner mentioned, the sear can be a problem. I used to over sear everything and learned a lot from the comprehensive sous vide searing guide. You probably already know, but drying your meat and getting the pan super hot are critical. Do you have any pictures of your steak?

I had no issue with the texture of the steaks. This is purely about the flavor. What I found is that nearly all the fat had been “cooked out” during the time in the water. The “buttery taste” is (to me) the only reason to get prime ribeyes. You can see in first picture below that they were well-marbled. The second picture shows how mine looked after searing. In my eyes it LOOKS great, but the taste of all the fat was gone. I’m guessing I’ll just have to do more experimentation with cheaper cuts before I try prime ribeye again. 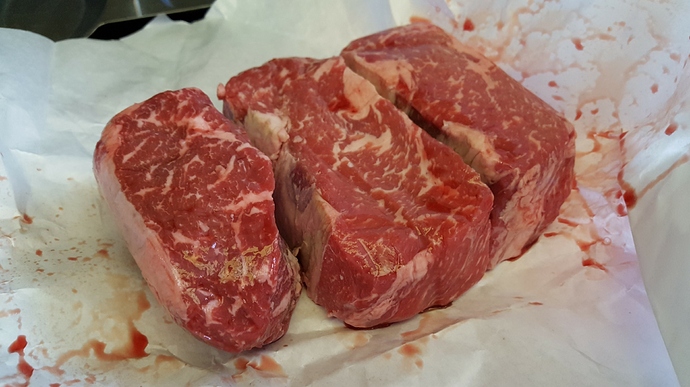 Had to put the second picture in a separate post due to be too new. 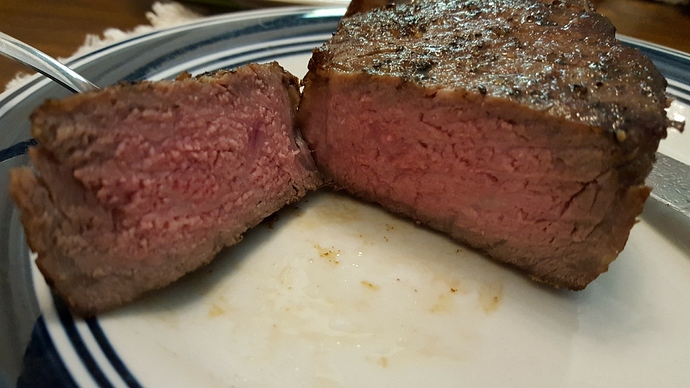 On your picture, it seems to be over cooked by the searing stage. It should not have a so thickness dry ring

I have just cook my first steak (tenderloin).

@iPa64 how did you do your dry brining?

Yesterday, I tried ribeye steaks 300gr about 30mm (1,2"), I cooked them for 1h45 at 54°C (129°F).
The result was disappointing, not enough tender.
I know it’s not a premium meat quality, but it’s interesting to know if by sous vide we can get something tender with that kind of quality.
I will try again but with cooking for 4 hours.
Does anyone has some advice about ribeye steak and time to cook ?
thanks 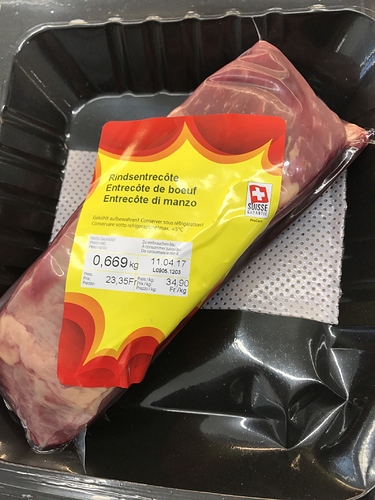 Part of the problem may have been the thickness - at 1/2" your sear may end up overcooking your steak (guessing that’s why you’re cooking them at 129°F? (or you really want a rare steak)
The longer you cook, the more tender the steaks will become.

Ok, I cooked them (ribeye) at 54°C for 4h15.
Then chill them in water with ice and go in the fridge (still inside their plastic bags).
On the evening I seared them as quickly than possible, but enough to get a hot meat.
Result was really better than my first test, really more tender, they was medium-rare and juicy.

Hi there, i always use the rare settings recommended base on the cut of steak, then have it in the bath with butter for min3 hrs. and its working fantastic for us. even a +1 inch t bone comes out really tender. i am guessing it’s like the confit process with the meat cooking /coating in oil at low temp.

I’m a newbie on sousvide. I’m disappointed as well. The first grass fed ribeyes I cooked as per youtube sous vide users… 135 degrees for 1 and a half hour, my husband and I were not impressed. So the 2nd time which was yesterday, I cooked it at 129 degrees for 2 hours along with new york steaks. After searing them on charcoal bbq outside, again the ribeye is NOT as tender as the New York steaks. The NY Steaks came out really delicious and all that fat was awesome. I’m starting to believe that maybe sousvide is better with tough and cheaper meat. HOwever, my husband doesn’t want to give up and asked me to do a test and buy a large Ribeye Steaks again and cut them into four. Do them all in 129 degrees but all different times - 30 minutes, 1 hour, and so on. I will see what the result is. If rib eye doesn’t have good result, I will not buy it again. I will just keep buying NY Steak and maybe London broil.

How thick were they? Just an fyi, grass feed beef tend to be tougher than more conventional beef you’ll find in stores and markets. Dont be afraid to bump the time up some.

With sous vide you can make those cheaper cuts come out amazing and sous vide does really shine with them, but the better (more tender) cuts of steak can come out just as amazing. It all comes down to finding out the temp and time settings that yield the results that you personally find the most appealing.
As you’ve probably already read Temperature determines “doneness”, and time determines “tenderness”, but the time you’ll want to use is impacted by the temperature you choose - the lower the temp the longer the time. This is because the collagen in the meat breaks down faster as temperature increases. In my opinion your husband is right when he suggests you do some testing. Personally I’d start with testing at 130F and probably try 1 1/2 hours, 2 1/2 hours, 3 1/2 hours, and 5 hours for steaks that were around an inch thick. I think this would let you get a feel for the impact the different times will have on the tenderness. Start keeping a notebook detailing the items cooked, temp and time used, and how well you liked the results. This will let you zero in on what YOU like!

You also mention using a BBQ grill to sear them. The first big “steak cook” I did was last Christmas over at my brothers house. He didn’t listen to me for the first few steaks he seared on his grill and seared them too long and at too low a temp. The steaks were merely “very good”. I then got him to thoroughly dry the remaining steaks, bumped the Green Egg grill up as hot as possible, then seared the remaining steaks for a max of 40 seconds on each side. The resulting steaks were incredible - and he went out and bought his own Anova.

Other’s on the forum may have additional and perhaps better ideas! I recommend looking at some of the older posts. There are lots of people providing excellent information in this forum. I’d suggest taking a particular look at posts made by @chatnoir and @Ember as they have both gone into some detail on not only specific actions to take, but why you should take them.

And come back and post how things turn out! Good luck!

Aston, Brian and Mirozen gave you many useful recommendations.

Your believing that SV is better with tough and cheaper meats is not consistent with most users’ experience here. Most new adopters of SV cooking are challenged by the searing stage and overdo it, particularly with premium and tender cuts like rib eye. It seems that “more is better” thinking takes over. Perhaps if you think of it as “browning” and realize that it occurs at a temperature as low as 350F you will have better results.

You might find it helpful to cook thicker steaks. Ignore the old one-steak-per-person rule and slice the finished product for service. Don’t be hesitant to cook for longer times either. SV cooked meat is very forgiving, except at the searing phase.