Was thinking about trying to cook pastrami with an already brined corned beef. Searching didn’t help. I have done this in an oven. Was wondering how the extra spices would affect the outcome for pastrami. Any idea of cook times? Any help is appricated.

Honestly, unless you’re in a hurry or have access to unusually high quality corned beef, my recommendation is to cure a brisket yourself. Store-bought corned beef tends to be over-salted, pumped full of water and just generally inferior to what you can do yourself.

It’s actually quite easy to make homemade corned beef. While most recipes call for a brine, I’ve switched to using dry cure instead. It works every bit as well but is a lot easier…and it takes up less space in the fridge. If you’re interested let me know and I’ll post the recipe and procedure that I use. 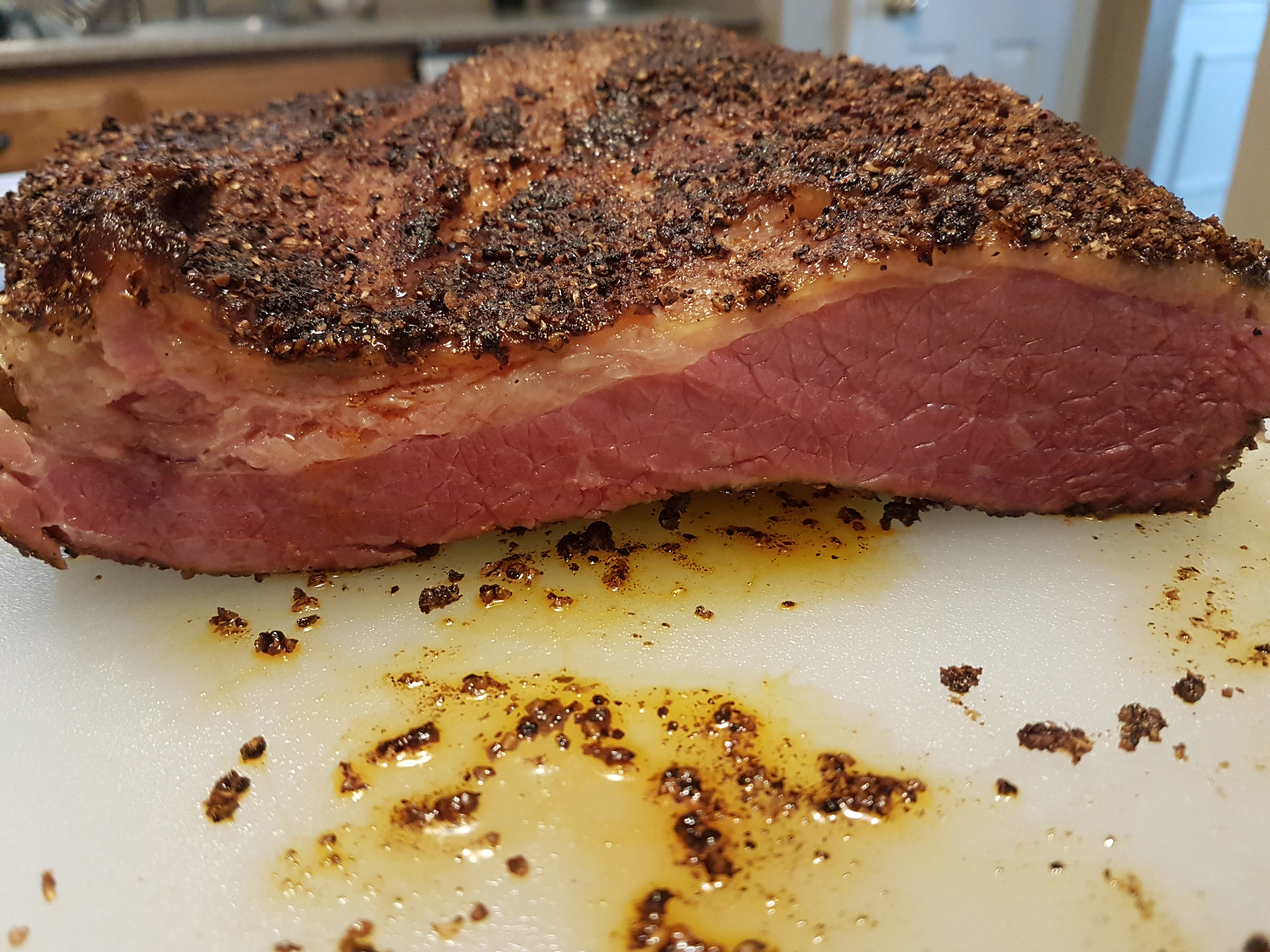 Yes, I’m interested. The times I have done the pastrami from corned beef is I soak it for a length of time, changing water. To rid it of excess salt. At first I didn’t do that and it was way too salty. Do you use the Anova to cook? I too am into dry brine and would be interested on what you do. Thanks ahead.

Of course you can tweak that however you like, but it works quite well.

Slice your pastrami, and amaze and impress your friends and family. Of course you’ll want to augment the experience with some good rye bread, Swiss cheese and stone ground mustard. 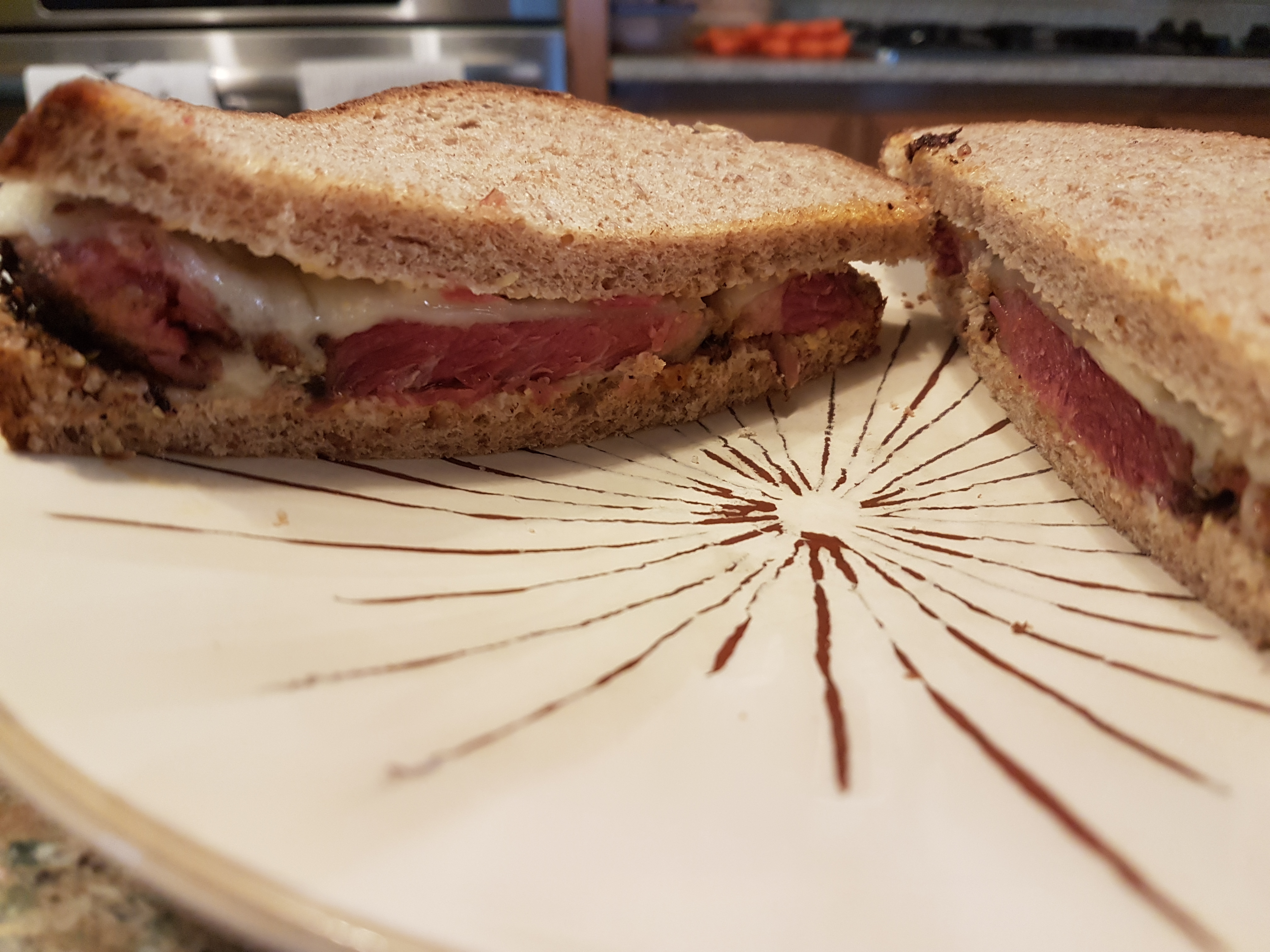 Disclaimer: The bread in that photo is actually whole wheat rather than rye. In spite of my touting tradition, I just don’t like rye.

There, now I feel better with that confession.

Thanks for that recipe, looks delicious! Will try this ASAP!

No problem. The most amazing part of it is just how easy it is relative to what I thought before I tried it the first time. Given the prices that decent pastrami commands at stores and delis it’s well worth making your own if you have access to brisket (or alternative cuts) at a reasonable cost. I pay $2.99/lb for whole USDA Prime packer briskets at Costco, so it’s a no-brainer for me.

I have never did one from scratch. Will try this one.
Thanks for posting the recipe.

If you’ve never done any meat curing before, make sure you know what “Cure #1” refers to (also known as “Prague Powder #1” “Pink Curing Salt”, etc.). It is a blend of 93.75% regular salt (sodium chloride) and 6.25% sodium nitrite, with pink food coloring and sometimes another minor ingredient or two added. Its purpose is to prevent the growth of nasty pathogens (like botulinum and others) and spoilage organisms, and to enhance flavor and color (its reaction with myoglobin is where the meat’s reddish-pink hue comes from). Don’t confuse it with Cure #2 (89.75% salt, 6.25% sodium nitrite and 4% sodium nitrate), which is used for much longer-term cures like hams, sausages, etc. Even worse, don’t confuse it with Himalayan pink salt, which is just regular salt with some naturally-occurring minerals in it.

Love smoke meat sandwiches…had me salivating thinking about this!!!

QUESTION: Would it be OK, to vacuum seal the meat, after coating it in the dry salt/sugar/spice mixture, and let it cure that way, in the refrigerator, for a week or so?
Should I then suous vide the package as-is, or should I open the bag and rinse off the spices, before resealing it and sous viding it?

Thanks @DParker. I’ve been meaning to give pastrami a go for a few years. You’ve just given me another good nudge and your method seems like a great starting point.

I’ve never experimented with doing the SV step without rinsing off the cure first so I can’t say what, if any issies that might cause. Since every procedure I’ve ever seen calls for that step prior to any sort of cooking I haven’t had the courage to risk 10-12 lbs of meat and a week of effort on it just to save using up a zip-loc bag. But if you decide to give it a try then I’d be most interested to hear about your results.

I highly recommend it. While there’s definitely some time and effort involved, it’s not at all technically challenging. And when you end up with a product that’s at least as good…and likely better…than commercially produced pastrami that’s currently commanding around $16/lb or so I’m sure you’ll conclude that it was well worth the time and effort. And it’s fun besides.

Here’s a recipe that I’ve made a few times (substituting brisket for the recommended ribs) where it calls for using a dry rub as well as a wet brine. In this recipe, they leave the rub on, smoke it (something else i don’t do) and then throw it in a water bath. If you’re going to be dry curing it, you’ll need to adjust so it’s not overly salty, but I don’t see why you wouldn’t be able to coat in the spices, let it cure, then cook without removing the spices.

If you’re going to be dry curing it, you’ll need to adjust so it’s not overly salty, but I don’t see why you wouldn’t be able to coat in the spices, let it cure, then cook without removing the spices.

The only problem is that is that you’re going to need to remove the pickling spices before you apply the dry rub for smoking, and that’s going to be a lot easier to do when the meat is cold as it comes out of the fridge, rather than when it’s hot from the SV cook.

Maybe I misunderstood, I though the entire point of hand’s post was seeing if it would be possible to not remove the pickling spices.

The point of his post was asking whether or not he could vac-pac the brisket for the cure and then go straight from there to the sous vide without opening it up. He didn’t ask about never rinsing the cure mix off. He would have to at some point prior to applying the dry rub and smoking.

Why would he have to? If he adjusted the salt level so it was exactly what one would want to be absorbed by threw meat, there’s no reason he couldn’t apply the cute mix and then the source blend, and nor remove either. I don’t know if yippy rinse of your meat after wet brining, the folks I know who make pastrami do not. If you remove all the extra salt and sugar, lose the water, why would you still need to rinse it off? Not trying to be a jerk, I’m genuinely trying to understand your thought process.

I didn’t say anything about the salt. What you want to remove primarily is the whole seeds and other stuff from the pickling spices.

There’s not much need to rinse after wet brining because the meat’s just been sitting in water with the pickling spices rather than them being rubbed into the meat, and they don’t adhere to it. Note that my procedure is for a dry cure, not a wet brine.

I don’t know know what a “source blend” is.