Hope I’m not posting this twice.
Want to get smoke flavor in pulled pork. Do I pre or post smoke and how do I do that. I do not want to use liquid smoke. Friends say you can’t do a pulled pork Sous vide. I want to prove them wrong. Need some help.
Thanks

there’s a video on youtube, where they tried to smoke it before and after… I forgot what was the conclusion, so try to take a look

Friends say you can’t do a pulled pork Sous vide.

Friends say a lot of things, and are usually dead wrong…as they are here. The best pulled pork I’ve ever done was one that I prepared via SV @ 165ºF/24 hrs followed by a cold water shock and then a ride in the smoker @ 225ºF for long enough to get the internal temp back up to 165ºF. You won’t get quite as much bark or smoke flavor as you would with a traditional 14 hour (or so) smoke, but you’ll get enough to make the greater tenderness and moisture well worth the trade-off. In fact you’ll need to be very careful when transferring the shoulder from SV to the smoker so that it doesn’t fall apart on you. Yeah, it’ll be that tender. Here are some shots of that pulled pork that can’t be done SV…and yet was: 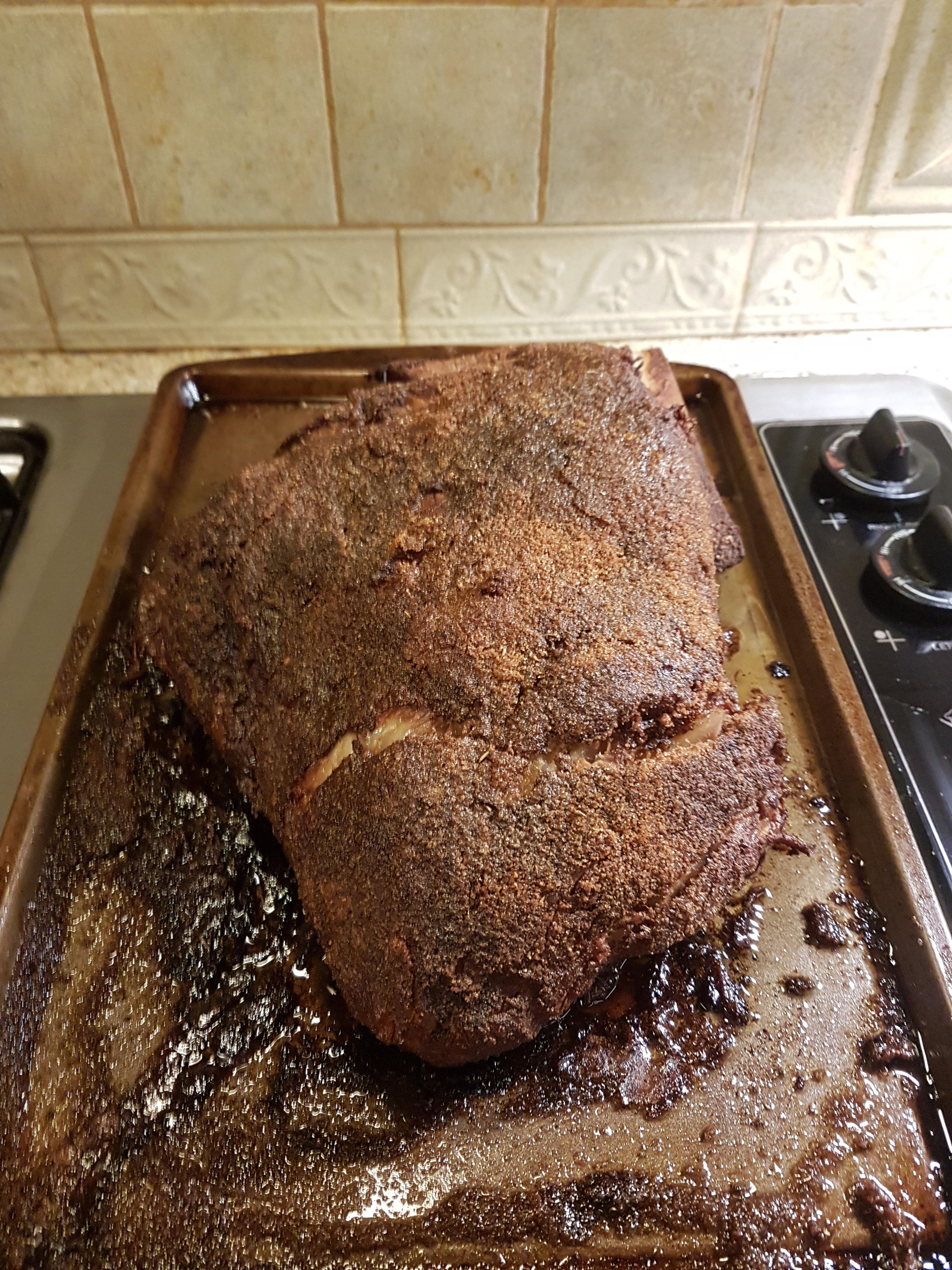 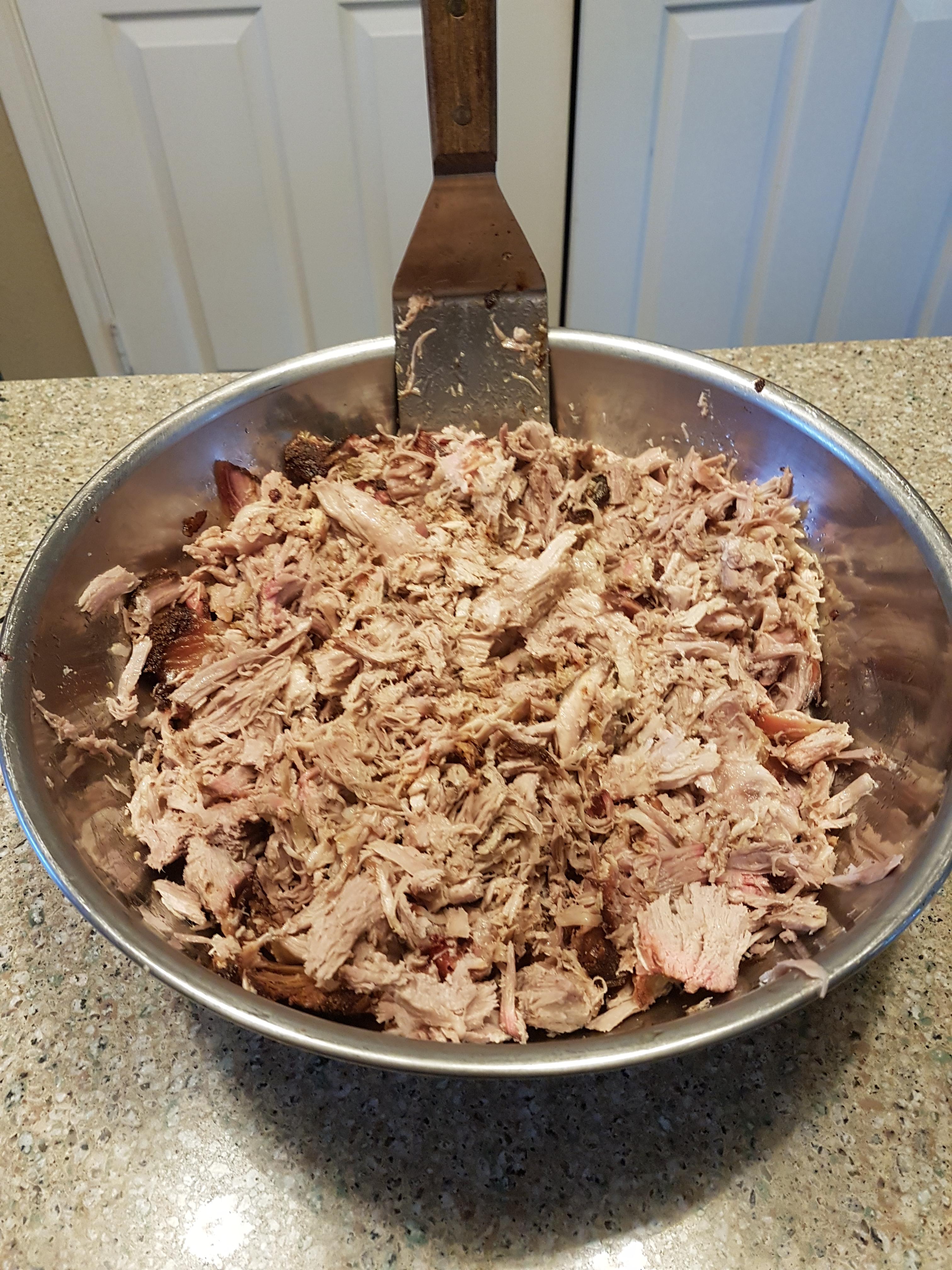 Whether to smoke and then sous vide or sous vide and then smoke is a matter of personal opinion and preference.

Sous vide first is about food safety. The meat is pasteurised, chilled and then can more safely go through the slow, cool portion of the smoking process.

Those who advocate smoking first give flavour as their reason quoting that ‘smoke flavours penetrate cold, raw meat better.’

The flavours carried in smoke don’t really penetrate the meat. They stick to the surface. Smoke sticks to cold, damp surfaces. So it will stick to the chilled, sous vide meat just fine.

Yes, there are components of the smoke that do actually penetrate the meat causing the smoke ring that we see, however there is no flavour component involved. The carbon monoxide that causes the smoke ring by altering the iron within the myoglobin, does not carry any flavour with it.

Given that the smoke is actually a surface and near surface flavour treatment, one should consider that sous vide cooking post smoke will probably remove some of that sticky smoke from the surface of the meat. Long cooking of the meat will cause loss of some juices, it can’t be helped. So, it is possible that you will finish up with more smoke flavour in the juices than left on the meat itself.

You’ll probably need to experiment and work out what works best for you.

I used Kenji’s SV pulled pork recipe a few months ago, and it came out great. His does the SV first and smoke after. http://www.seriouseats.com/recipes/2016/07/sous-vide-barbecue-pulled-pork-shoulder-recipe.html

I didn’t add the liquid smoke or Prague powder.

I took 2 butts and made one using the SV method, the other I did a more traditional cook at around 275 on my kamado.

My wife and two of her daughters did a blind taste test.

I did a non-blind test and felt the SV version was the clear winner.

I won’t always SV my pork butts from now on - in fact, I usually cook more than one at a time which would make SV a bigger challenge - but I’ll probably do it every once in a while.

You may find this site of interest. As mentioned above, Kenji’s info is also top notch. Sous-Vide-Que combines the best of three great cooking methods: grilling, smoking, and sous vide. From grilling you get the rich flavors of browning. From smoking, you get the alluring aromas of wood smoke. And from sous vide, you get evenly cooked...

I also used Kenji’s SV pulled pork recipe last weekend. I cooked it at 155 for 24 hrs then shocked it in ice water. Put it on the Big Green Egg for another few hours. It was the best that we ever had.

Where Can I find Kenji’s recipe? What was going on in the egg? I’ve tried several ways and can’t get that hickory smoke flavor I️ used to get when using my Weber with hickory chunks. I️ don’t like Liquid Smoke. Any help would be appreciated.
Norm

You can get his recipe at http://www.seriouseats.com/recipes/2016/07/sous-vide-barbecue-pulled-pork-shoulder-recipe.html I heat the egg to 200 - 225F add wood chips and wait. I have also done the same think in a Bradley smoker with the same results. I don’t like liquid smoke either. I mostly use apple wood for smoke.