Puzzled by my weird tenderloin results.

Hi. I use the ANOVA nano in an 8 quart uncovered pot. Tonight I did 2 individually vacuum bagged 8 ounce filets at 130 degrees, identical thickness and handling. After identical cooking times and searing them together, one piece was perfect medium rare throughout and other piece was perfectly uniform more red and rare throughout. I am flummoxed. Any idea how this could happen? Could the bag on top or bottom of the pot have experienced that much of a temp diffetence long enough? Thx for any thoughts. John.

Appearance does not indicate doneness. This can really only be confirmed with a temperature probe. There are many things that can impact appearance. When this sort of thing happens the culprit tends to be the searing methodology, but it is really difficult to guess at. The more intricate the information you are able to provide the better we will be able to theorize cause.

Thx for taking time to reply. They were beef tenderloin. Both were 1.75 inches. Sear time in pan the was same, Odd to me was the difference in rare appearance was throughout the entire piece, so if sear on one side was to blame might have looked uneven, this wasn’t uneven. I guess it must be something I did after the bath tho.

Were both pieces equally well dried after the bath?

Thought so. Maybe my sears were not as symmetric. I moved the more rare one around more . Do you think 129 degrees is medium rare?

That tends to be my medium rare, 129-131F. I find moving the steak around during the sear to be a good way to achieve the desired level of brown with less risk of overcooking. It’s also good for those who like to fiddle.

Similarly, some will suggest frequent flipping during the sear to control the heat penetration into the meat.

The quicker that you can achieve your desired sear, the better.

Thanks Ember. Will let you know how things go next time. John.

You might consider investing in a bag of SOUS VIDE BALLS to reduce temperature loss and evaporation during the cooking process. I wouldn’t cook this way without them. Here’s the link to SVBs sold by Amazon.com: 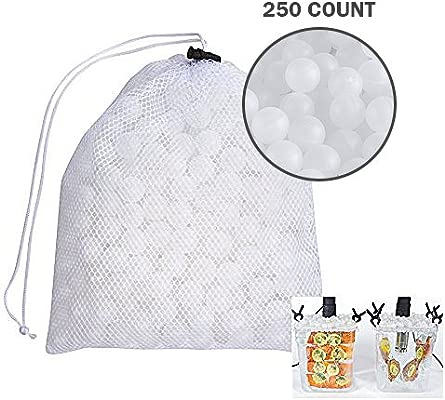 It sounds to me that the two pieces were on top of each other with one directly touching the bottom? The bottom one was probably the less done one. It will cook like a solid piece without water flow around the bags. Adding time would have cooked each piece the same.

It’s possible one was touching the bottom of the pan with no water circulation around one side of it, it would probably have stayed colder than the other one I’m a firm believer of using the little racks for your steaks to hold them up and separate from each other.
It’s also super convenient if you’re doing more than one or two as you only burn your hands once getting the steaks out

I would suggest getting a dedicated sous vide container with lid. I got one on Amazon for about 40 made for my model. It also came with a “dish rack” thing to keep the meat perfectly centered and separated in the water

Really… There is no need to do that. Learn how you will use your device before spending monwy on a ‘special container’ that really doesn’t need to be special at all. Can’t help but feel some people just like wasting money… Which they are welcome to do, but isn’t necessary.

The spring loaded grippy things in the hardware section.Resemble great big pliers. I use them to hold the top of the bags on to the side of the pot. I frequently lay one on the bottom to keep the bag away from the bottom. Sometimes I clip one to a lower corner if there is a little air and a tendency to float. Sometimes I clip adjacent orders of 2 bags so they don’t overlap.

Second time I made sure that both pieces had unobstructed circulation around them. Also more meticulous with sear time. Came out perectly symmetric. Thanks all for the comments!

Glad you got the expected results.