Searing for a dinner party crowd - can't use my cast iron

I have one of those homes with a large kitchen island and an open concept great room. Everyone tends to gather at the island (which seats at least six people).

I’d very much like to do sous vide pork tenderloins for dinner for 14. Those come out so well in the sous vide! But searing in the cast iron will be impossible. It smokes too much. It isn’t big enough - by the time I get the last one seared off, the first one will be cold.

We’ve experimented with searing these on the grates of a gas grill, but it browned, but did not get that lovely crust.

That is a difficult question. I have a large propane burner that I use outdoors for seafood boils and turkey frying. I have a kettle that I can fry 2 15 pound turkeys at one time. If OI were going to be serving a group often enough I would invest in a huge cast iron skillet that would accommodate multiple pieces of meat. I wonder if a propane weed burner would work if you lined the tenderloins up inside your grill.

Not a solution for pork but you could serve corned beef. I had that for dinner last night and I server it and sliced it right out of the bag. It was delicious.

Not a huge fan of corned beef - but might try that a home for a just us or a smaller group. I hate how corned beef shrinks when it’s cooked any other way, and I assume (???) that sous vide would eliminate some of that shrinkage?

I thought about the larger cast iron pan, and I’m not against that idea. EXCEPT it really doesn’t solve my problem. The thing will still smoke like hell. Yes, I have a big, strong fan over my stovetop, but still. . . And how would it heat evenly over a standard five burner gas stove?

Still searching for a solution here. . .

What you really need is a salamander like @chatnoir mentioned in an earlier thread.

Obviously not a workable solution at home.
If it smokes too much, sounds like you don’t want to do inside.
I’ve never done SV for 14, so brainstorming here. Some ideas:

You definitely want to warm those plates (serving and dining). It will help keep things at serving temp.

JK, don’t give up. And you don’t have to change your menu.

You might consider getting a cast iron bridging griddle. Lodge and several others make them so they are commonly available They span two burners so one will easily accommodate 6 pieces of pork tenderloin or two batches of 4. That’s plenty for 14. Just be sure to test drive it before your party so you know how long to preheat and how to adjust the burners appropriately.

Cast iron tends to spread heat, not perfectly, but you are going to move the meat around anyway, so it pretty-well evens out the tasty crust that results. With your exhaust fan on high you shouldn’t have too much smoke if the griddle is just moderately hot, about 450F. Go very easy on the oil to reduce smoking. I find i need almost no fat on my old and well-seasoned griddle, just a bit of clarified butter on the seasoned meat.

If you are serving 14, you can’t slice and serve it all at once, particularly if there’s sides to contend with. So consider doing two batches and deputize a meat-flipper from your guests while you slice and serve the first batch. You will need 18" broiler tongs to do the flipping.

A contact thermometer for that griddle is a worthwhile investment. I got mine at Walmart for $6 a decade ago. If you belong to the cost-is-no-concern club, an infra-red thermometer is quicker and more precise. Either way, it provides you with a control for precise and repeatable searing that fits with your Anova precision cooker. It also indicates where the cool spots are lurking that’s useful to know.

Make it a great meal.

I have a big outdoor burner so smoke is not an issue.

It’s not the meat that smokes. It’s the oil. Oil the meat rather than the pan and slways use a high smoke point oil like avocado

Try a cast iron griddle on your grill out side. Run your grill on its highest setting with the lid closed and the griddle in place. The griddle will get supper hot for your sear and should give you plenty of space to sear all the loin.

Also, try brushing a thin coat of a high fat mayo (like Duke’s) on the loins before you sear them. This will help build a nice crust and will not impart any flavor change. The theory is that emulsified oil in the mayo sticks better that regular butter of oil so it hangs around longer during the searing creating a better crust.

RLD that sounds like a great solution. THANK YOU.
I use that mayonaisse trick when i broil salmon, sous vide’d or not .

We will try it out using my standard cast iron first to make sure that our gas grill will get it hot enough. Any rough guestimates of how long that might take?

I use ghee. Is that not high enough?

In any event, the noise from the vent and the open concept of the kitchen area really make it unacceptable to stovetop sear in a cast iron when we have a group of guests.

I would guess 15-20 minutes would be my guess. Depends on the BTU of the burner. My old 3 burner members mark hits 600 in about 20 minutes on the hood thermometer.

Thank you AGAIN for the reply. Much appreciated.

Question: Is there some inexpensive tool (thermometer) that can measure the temperature of a cast iron pan?

I got an infrared thermometer from Harbor Freight for around $20 on sale. It has worked well.

JK, Answer: for about half that price you should be able to get a surface thermometer like this one at Amazon:
Polder THM-570 Grill Surface Thermometer, Stainless Steel

I have an identical one made by Taylor that i bought about 15 years ago. It’s useful on the gas grill, and pizza stones too.

For searing speed isn’t particularly needed as you can leave the thermometer on the griddle or pan as it heats. Make sure the one you get has a loop that makes it easy to lift off the griddle with a fork or tongs.

Here’s a list of oil smoke points. Maybe you’ll find it useful. (I do! 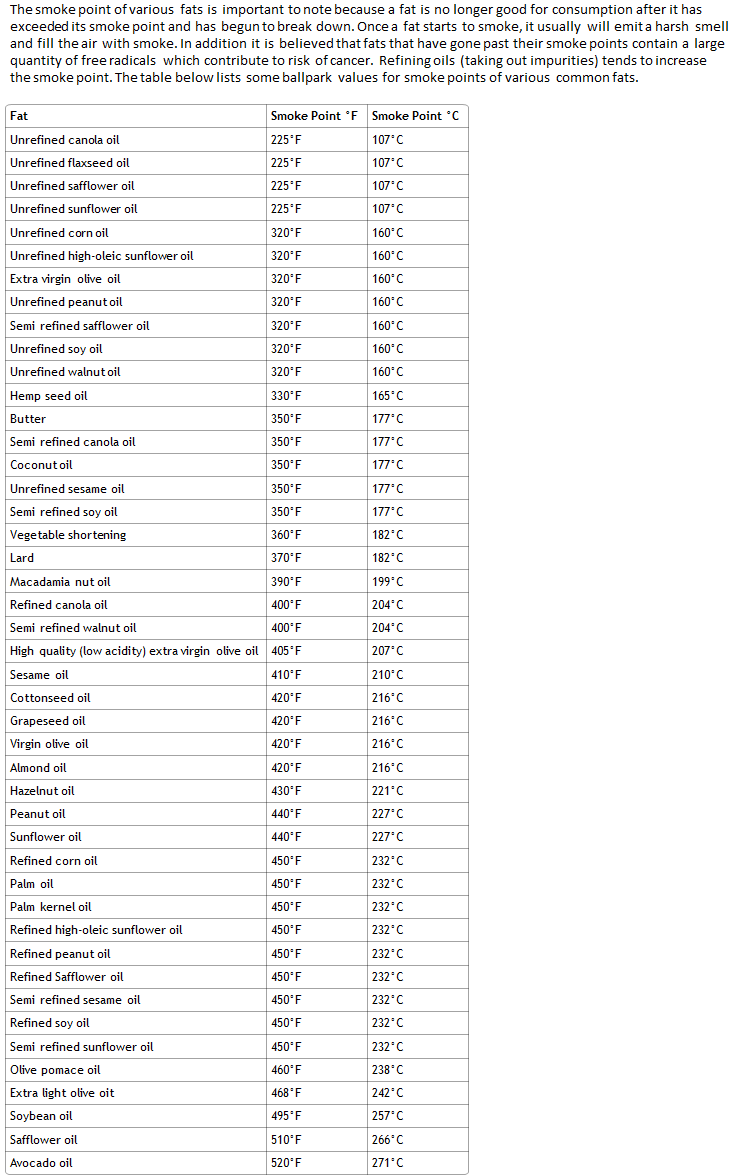 I use a Cast Iron Pan on a portable induction burner - outside the house. Fortunately I have a power outlet handy on our outside deck.

The primary initial issue in the initial post was that smoke from searing inside would be undesirable while guests were over so I thought I’d put in my two cents. My wife jumped on me about this issue right away after I got my Anova and searing outside was the only way to go!

What do you do when you have a larger group of people over to dinner and need more room to sear things than the standard cast iron pan will fit?

I haven’t yet had a large group over since getting the Anova, but I have brought it over to friends and cooked with it there. In those cases they have had outdoor grills that could handle a “mass searing” - which is really handy when you have a lot of people standing around watching and interested what you are doing and ready to try what you are cooking!

Have you ever heard of Grill Grates? You can place them over your grates that you have on your grill and it gives beautiful grate sear marks! I think they may even have something for stove top. Just a thought. Enjoy!

Bought a cast iron griddle for my BBQ. I do the searing outside now.