I’m pretty sure that we all sear. I’ve tried many ways to sear from my grill to a torch. Cast iron on the stove has been a good option for me. I picked up two Nuwave Gold Induction Cooktops at a pawn shop. They were on sale, how could I resist, $25 each? One still had the stickers on the top telling people to remove the stickers before cooking on it.

Why did I buy them and what does this have to do with Anova? Glad that you asked. One button on them says “Max Sear.” Oh yes, that got my attention. I combined that 570º F Max Sear setting with Cast Iron pans and griddle and found my new searing method. Does anyone else use and induction cooktop to sear? What about cast iron? I love how fast these things heat up. I found them on Amazon and there’s even an 1800 watt model. The 1500 watt gets hot and fast, I can only imagine the 1800 watt. Keep in mind that 1500 watts is 12.5 amps, if your Anova is on that’s another 7.5 amps. That’s right at the max for most kitchen circuits (20 amps) so you might want to turn off your Anova before searing. 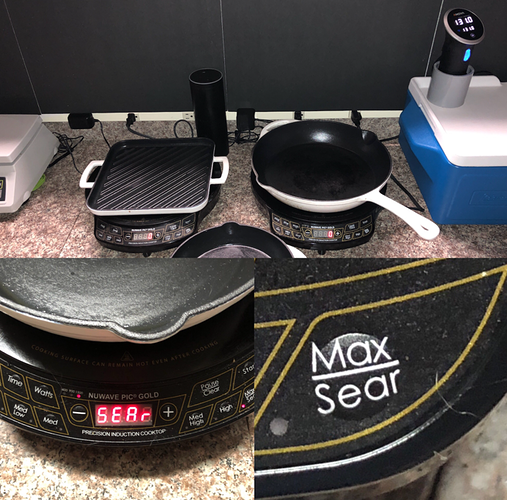 A 10.5" cast iron skillet is my go-to searing tool for anything that will fit in it. I don’t have an induction burner though, so I use the oven to evenly heat the pan to nearly 500°F then transfer it to the cooktop on high heat to take it the rest of the way. I do it that way because the oven heats the iron gradually and evenly, while rapid heating over a flame risks warping and cracking the iron due to uneven heating. That’s something I’d be careful about if your induction burners heat as rapidly as you say.

The picture below shows a four burner induction cooktop where the user boils water through a newspaper without hurting the newspaper. Unlike a traditional gas or electric there is no heating element. The pot is where the heat is generated.

I understand how magnetic induction works, and it does not heat an entire cooking vessel evenly. The bottom of the pot is heated where it interacts with the alternating magnetic field, and the sides of the vessel are not directly heated at all, and only take on heat via conduction…and cast iron is a relatively poor heat conductor…hence the possibility of warping when rapid heating is employed.

I use an 1800 watt portable induction burner and a 10.5 inch Lodge cast iron pan. (After the feedback from my wife regarding the smoke generated from searing some steaks on the kitchen range the purchase of an induction burner I could plug in outside on the deck became a marital “no brainer”!

) I’ve been extremely happy with searing using these.
@DParker I agree with your statements. I try to mitigate any potential problems by preheating for a while at a lower temp, eventually upping it for searing. So far so good - but we’ll see how things stand a year from now!