Agreed. I just did a 24 hour sirloin beef roast in one.

Here’s an idea for covering the water: I ran mine in the laundry room, which also stores shipping supplies for my home biz. I used several of those small clear plastic inflated shipping cushions to cover the water and there was zero water loss. They’re the same size as ordinary ziplock sandwich bags-- just take a few, slightly inflate them, and you have insulated floats to cover the surface of vessels large or small.

I use a 70 gt coleman cooler. Have cooked over 80hrs without adding water. Shut anova off and in. 15hrs it dropped from 141down to 132 degrees. Put anova in center so I can put bags all around. Have done 4 briskets at one time

I think I have an igloo underneath the house. Previous owners of our house left it. Awesome way to re-purpose, just need to buy a tool to cut out a hole for the anova,

I started out wiith using a stock pot and covering the top with foil. Do not cover the APC however. Steam will be bad for the electronics in the upper unit. Wrapped the pot with bubble wrap to keep the heat more uniform for long cooking times.
Amazon has many polycarb containers. They can be expensive so I went with a 12 qt. Size (about $20.00) and also got a hinged lid ($11.00) which was made for the Anova.
Good luck. I think mine is GREAT!!

In the end I just used a heat resistand resin to coat the inside of the container. Had to cure it using a oplastic sheet at 80 degress celsius for 5 hours. Now the container works fine. No more leakage.

Update. I have coated the Kangabox with a heat resistant resin. It works fine now.

This is a great idea!
What did you use to cut the hole? Did you seal the edges of the cut after to prevent moisture from getting in there and molding?

Anybody know if the Nano can be used with the apparently popular 24can Coleman Stacker and its lid? If so, do you put the whole thing (clamp included) thru one big awkward-shaped hole cut in the lid somewhere, or clamp it over the side with a side-cut opening in the lid? Wondering as the (I believe) clamp isn’t removable on this model of Anova.

Yes, the latter. Clamp it over the side with a side-cut opening in the lid. Here’s an example: 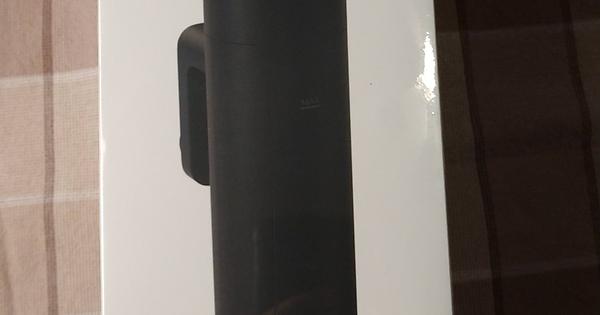 Thanks, Alyssa! Looking forward to getting one of those coolers and giving it a shot.

Yes I did coat the sides of the hole. The box works perfectly. Keeps the watertemp for a long time. After 2 hours only about 5 degrees Celsius loss.
This of course means your Snobs will be using much less power.
I also have a plastic container that is smaller. I place this in the box for cooking smaller quantities of meat.
Nowadays I like to combine cuts that can be cooked together. After cooking I put them in the freezer. In the bag. When we eat I can just take out portions and sear them.
Some cuts need longer cooking times. A timer with multiple clocks solves that problem.

Goshen–What’s your preferred method for defrosting the cuts before you sear them?

I take a bag out if the fridge in the morning. About an hour before dinner I take the defrosted meat out of the bag. The juices in the bag I pour into a small bowl. The meat goes onto a cutting tray with paper towels on it. The top of the meat is dabbed with another paper towel. When the cut is more or less dry I leave it between paper towels to dry further.
When it comes to searing the meat is nice and dry.
The juices can go in a side dish.

This is what I used for cutting the hole. You do need to leave enough room from the edge to allow your Anova to immerge in a container if you want to use a smaller one inside the box. 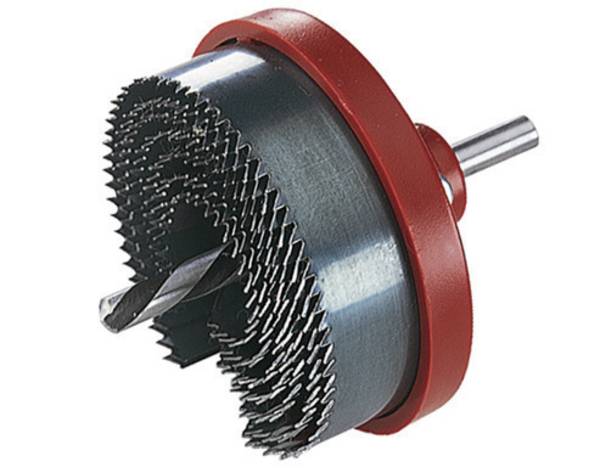 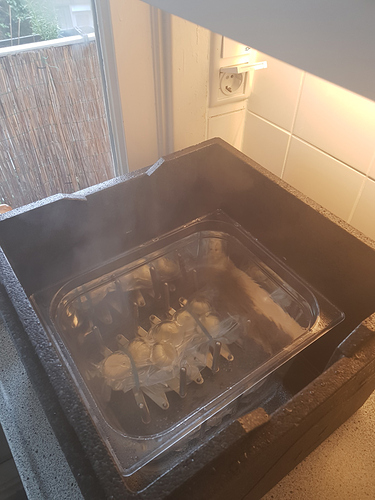 What are you using the cured garlic for?

Anyone using coolers what are the litre measurements? It seems coolers in the UK are sold by the litre rather than cans! Can’t go and look at them as it’s winter so would be buying online…

The cured garlic goes in a foodprocessor and is made into a paste. Combine with olive oil and you can use this in dishes. Cured garlic loses some of garlicsctsginess and tastes softer. You can keep it in the fridge for at least a week.

The thing I like about the Coleman 24 can is that when I clamp the Anova on the side it rests perfectly on the bottom, as if it were made for it!

I hope the above info helps!