Reheated a Puerto Rican style stew I had made yesterday and threw in some sous vide sausages, cooked at 150F/65.5C for 1 hour. Definitely a tasty treat! I loved the way they came out - very juicy. And I didn’t have to worry about babysitting them to make sure they were cooked right the traditional way. Just dropped them in for a swim, then seared for a couple of minutes until all sides were golden.

I made a total of 3 sausages. There were no leftovers. And I was the only one who ate. 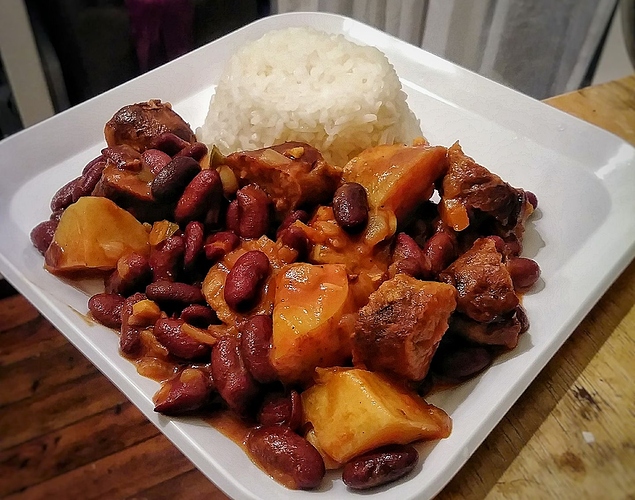 The Puerto Rican stew (habichuelas guisadas) isn’t usually made with meat, although some versions of the recipe ask for ham packets or just pure ham, which I’ve never used. 'Cuz that’s just not the way I grew up having it. You can either use red kidney beans, but if you want to be really true to the recipe, use pink beans.

I threw in sausages because, well, that’s just what I wanted. This recipe comes close to how I usually make it.

I recommend making your own sofrito if you can. You can sometimes find some of the canned stuff at Latin-type grocery stores, but it’s nowhere near the homemade version.

Thanks a bunch!!! Awesome site!! Going to grab a bunch of her recipe’s and try them out!!!

Ugh! I feel your pain. Been doing it for 2 weeks. This is just painful to look at.

Just hit the first week today and down 10 pounds (but friends tell me most of that may be water weight). Don’t know how that could be as my sodium intake’s still pretty high by my tracking.

Oh, those Miracle Noodles (Shirataki) are pretty awesome - had those last night - the Asian Noodle Bowl recipe from ketoconnect.net (trying a few of their recipes). Decent prices on the noodles on Amazon.

Oh man. Keto is tough (at least for me - I love carbs more than anything else in this world haha). But good look to you two! I am sure there really creative alternatives to dishes like these. At least I hope! Skip the beans and potatoes and double the meat, maybe.

Heh, thanks! Yep, I’ve been finding homes for all of the carbs in my cupboards and fridge that won’t survive until the end of the diet (whenever that is). Aggressively trying to get down to my college weight (and, no, I won’t share what the delta is)

On the mailing list over at ketoconnect.net - they sent me another few recipes today - already have 20 in the Keto section of my Paprika app now.

Haven’t seen any opportunities for sous vide, but I haven’t yet used mine for fish (picked up some frozen halibut and sole fillets), so I’ll dig around for recipes and give those a whirl.