Just bought an Anova sous vide kit and picked up a prime top round steak to see if sous vide preparation would turn it into a cut or two above. After reading and watching a lot of information about my new toy, I filled it with water, set the temp. to 130.5 degrees F. and the time to six hours. I finished the steak under my oven broiler for several minutes per side. The result was palatable and instructive.

Throughout the cooking process I had kept the meat label on the counter and was about to throw it away when I notice the small printed advisory that the meat was “BLADE TENDERIZED.” What does that mean, I thought. After looking up the definition, I was aghast.

It is a way of tenderizing tougher cut of meat by using small knife blades or needles. The result of doing so can result in surface bacteria being driven into the meat where searing can not reach it. So, if such a cut of meat isn’t cooked at a higher temperature than a sous vide setting calls out, food poisoning can result.

While Costco puts that information on their meat labels, not every market or butcher does. Ask. Beware.

Hi and welcome Tori, your warning is appreciated, but ill advised and just plain wrong for cooks using the SV technique. Yes, there’s a lot more mechanically tenderized meat being sold since prices have risen and its use isn’t always disclosed.

However, you should understand that food safety is dependant on a combination of time and temperature. You cooked your steak about 3 degrees higher than the thermal death point of the most common pathogens. Once temperature equilibrium was attained your meat was completely safe, broiler-seared or not.

And finishing your thoroughly cooked steak for several minutes per side under the broiler likely resulted in your less than enthusiastic appreciation. Excessive heat dries and toughens meat.

Here’s a link to a valuable science based resource to support your knowledge of food safety and your achieving amazing results from your new toy.

Thank you again for the citation to Douglas Baldwin’s seminal work!. We cannot be reminded too often of the utility of frequent rereading and study of his work.

I purchased a Jaccard at just about the same time as my APC. The effect of ‘blade tenderizing’ is hardly different from hamburger and steak tartare, and one should cook blade-tenderized just as one would hamburger - or not, as steak tartare.

What You Need to Know About Mechanically Tenderized Beef - Consumer Reports

Consumer Reports presents all the important information on mechanically tenderized beef you need to know to keep yourself and your family safe.

Milady Wife loves Swiss Steak just the way her father used to make it for Sunday Dinner. Tough meat dredged in flour, salt, pepper, and pounded thin, about 5 mm 1/4”, then moist roast in a dutch oven.

Pounding makes a mess of splatter, so I bought the Jaccard, though I have not yet tried it as I am having too much fun with my APC.

We are vacationing (with the APC) and there is a real butcher not too far away. I plan to, among other things, buy a small beef tenderloin and make medallions with bacon, blue cheese, sautéed onions and mushrooms.

We are here to bicycle. 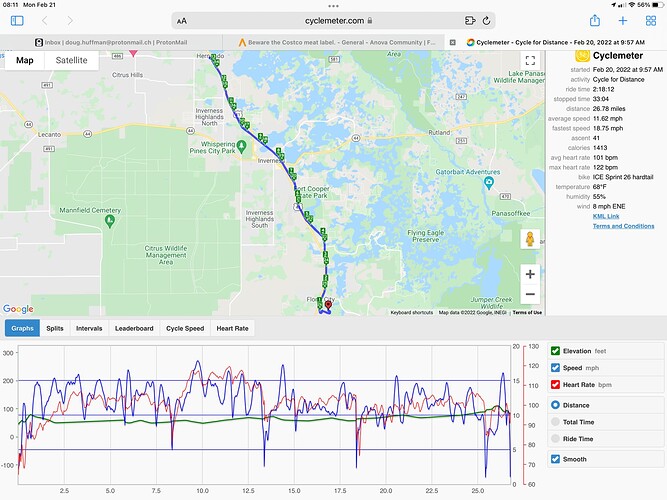 Hey Tori, there’s one more bit of advice that this cook often provides to SV newcomers. That’s forget just about every rule and standard you followed in your conventional cooking technique.

You’re almost there in sharing your time and temperature details, but there’s one more critical element, - and that’s thickness. After considering the cut of meat you are cooking, tough or tender, you need to know thickness as it’s critical to determining the SV cooking time.

When using the SV cooking technique you will learn to think more about heat transfer. You will soon realize the broiler using radiation is going to be less effective than direct conduction, as in finishing in a thoroughly preheated cast iron pan. That’s because air is a relatively poor medium of heat transfer, so we SV cook in the absence of air.

Thank you, chatnoir, and here I thought sous vide was going to be easier than mastering barbecuing…which I haven’t. I appreciate the knowledge you have imparted. As for the searing finish, there appears to be several methods and I selected what would most likely not set off the fire alarm in the kitchen. I do have cast iron skillets but didn’t have any high temp. oil. How about the use of a hand torch?

After reading your reply, the only thing I could remember from it was your wonderful planned meal. Bon appetite and bon voyage.

A hand torch will work; better if you have the flame spreader attachment. Some will say that the ethanethiol that is added to the propane to give it an odor taints the meat, however, I personally have not experienced this. To further reduce the chances use the portion of the flame beyond the blue part.

I have both a one burner butane stove (like you see at the omelet bar) and a induction burner that I use outdoors with cast iron or black steel pans for searing. I like the pan method as I can finish the meat with browned butter and sometimes fresh rosemary.

My pleasure Tori. Guess what, SV cooking is significantly easier than barbecuing if you are referring to cooking over a fire or in a smoker. SV has only a few basic rules to follow while BBQ has a great number of constantly changing variables to challenge the cook.

The SV cooking technique follow the simple process I started with my second paragraph earlier. After determining the cooking time based on thickness, select the cooking temperature based on your desired degree of doneness. If you work your way through a few cooks following Blanchard you’ll be doing just fine. I advise keeping a detailed record of each cook so you can precisely replicate every success.

It seems to me that many cooks use too much oil and too high a heat. Most important is to thoroughly dry the meat’s surface. Otherwise you are steaming your meat and that only annoys it.

Try just rubbing a 1/4 tsp / 5ml vegetable oil on the seasoned steak. A thin film is all a steak needs. You should not be shallow frying the cooked steaks.

Your oven’s broiler probably does not enjoy the benefit of an exhaust hood so it can be troublesome to smoke alarms.

The combination of finishing in a cast iron skillet while torching the top side is quick and effective. Blanchard demonstrates the technique for steak. You should be finished before your smoke alarm knows you’re in the kitchen. Of course you should run your over cook top exhaust fan on high if it actually does exhaust outdoors. Otherwise they tend to just spread cooking vapours around your kitchen.

Do the work and happy cooking.

All of what you say is instructive and a lot of it illuminates my ignorance and errors while attempting my first sous vide meal. Thank you. For such a beginning, though, my wife and I are still alive, we don’t have food poisoning and our jaws don’t ache. I’d call it a qualified success for a neophyte.

I bought my APC to master steaks… I don’t do steaks very often, but I enjoy them. I buy my meat at Costco at well. I do a marinade & let them sit overnight. I will cook them at the proper temp, usually using J.Kenzi’s recipe. If i’m at home, I have a searing burner on my bbq, let it get up to temp, and the meat is on the searer for less than 90 seconds, basically 20 seconds, turn 90deg, 20 seconds & flip/repeat, just to get my cross marks. If i’m elsewhere, bbq gets lit & screaming hot… same idea, just to get my searing/cross marks in. I will never ever buy a steak again at a restaurant & most of my guests have said the same thing. Several have gone out & bought sous vide machines.
One may argue that Costco has superior cuts of meat (which they do), but i’ve also tried it with crappy cuts & it makes a huge difference in the tenderness of the meat. Practice makes perfect!

I thought it in this thread but apparently elsewhere; I read that Costco blade-tenderizes ALL of their beef except the fillets and the toughest low end cuts. I’ll backtrack and try to make a good citation.

After bladed steaks sold by Costco were linked to an E. coli outbreak in Canada in September 2012, Costco began labeling its mechanically tenderized beef. A Costco spokesman told us all of its beef is tenderized by machines except for filets and flank steaks.

What You Need to Know About Mechanically Tenderized Beef - Consumer Reports

Consumer Reports presents all the important information on mechanically tenderized beef you need to know to keep yourself and your family safe.

Like you, I don’t do steaks very often either and now, because of inflation, will probably do them less…the prime cuts anyway. Because Costco had gotten in APC kits, it seemed like the solution to dealing with less tender cuts so I bought one. Although the learning curve doesn’t sound daunting, it will take me a while to learn the ropes. Advice from those of you who have proceeded me is much appreciated. Thank you.
As far as Costco blade tenderizing, I have a beef with them. Being one of “the elderly” spoken of in the Consumer Reports article, I don’t appreciate feeling like I’m playing Rib Eye Roulette if I splurge on a better cut. To me, Costco’s marketing decision is a callous gamble that the risk from blade tenderizing is worth the profit. While I’m guilty of not having paid close attention in the past, my future meat purchases will be more judicious, more delicious and less suspicious.

My wife subscribes to Consumer Reports and has for years, but my memory must have lost that article in the basement of my brain. Ye gads, something else to worry about now. Black bean burgers, anyone?

Keep in mind that with sous vide, you can fully pasteurize that steak at medium-rare temps so there is no additional risk in cooking blade tenderized sous vide

Thanks, I will keep that in mind. Blessed are we who have sous vide equipment. For those that don’t, however, are still advised to cook their blade tenderized meat to a minimum internal temperature of 160° F.