Does anyone have a recipe for a pork loin roast?

Go to the recipe section either here or on the app and type Pork Loin in the search field.

Here in the UK we call pork loin, pork fillet.
I bought a 500gm piece last weekend that was reduced in price as it was towards the end of the day and it was on it’s “use by” date.

I cut it into two and seasoned it generously with salt and black pepper and cooked one 250gm piece for 3 hours at 60 degrees C. As it was only for me I didn’t bother to do anything afterwards other than to take it out of the bag dry it off and place it on my plate with my potatoes, veg and some apple sauce. If I was doing it for others I would probably have briefly seared it to look nicer. It was really juicy and tender but it did look a little on the pink side and I was not accustomed to that mouth feel with pork, it was the first type of pork I had used sous vide for.

When I did the second piece the following day I did it at 62 degrees C and it was still juicy, still had a slight pinkish tinge to it but I preferred it to the previous day’s at the lower temperature.

I hope this helps

@Sandra51, I’m sorry, I have to correct you there. Pork fillet is pork tenderloin. We use English nomenclature in Australia (mostly). 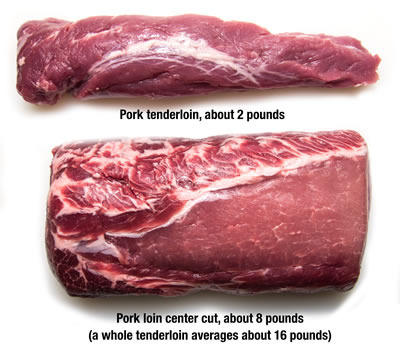 Thanks for the correction Ember.
I guess that the same temperature would give similar results though, only the timing would need to be adjusted.

Please note, that the sub-text on the loin also incorrectly calls it a tenderloin.

I have made several very successful pork tenderloins but I start with the Butcher Shop Steak Rub that you can get from the Organic Butcher in McLean, VA (703-790-8300). The stuff is fantastic so buy a big bottle because you will use it on a lot of products. I coat the tenderloin / roast with the rub the night before, put it in a vacuum bag, remove the air and let it sit overnight in the refrigerator. The next day I cook it 2-3 hours at 142 and when ready to eat I remove the meat and finish it in either a large skillet with a ribbed bottom or on the grill. It is perfect. If you put two pieces of meat in a large bag you need to allow some extra time for cooking. A second option is to use Earth & Vine Provisions Pineapple Sake Teriyaki Marinade (available at the Organic Butcher on on Amazon) and let the meat marinade overnight and cook in some of that. Then remove from the bag when cooking is done, coat with the steak rub and finish in the skillet or on the grill. Both work great on Pork Tenderloin / Roasts or Pork Cutlets.

Just a reminder that the OP, or at least the title is asking about Pork Loin and not Pork Tenderloin which is a different cut of meat altogether.

Thanks for the link to the recipes-some very interesting ones!