So my first Pork loin (not a skinny little tenderloin, but rather, a big, 10 lb piece, basically a big. 2ft long pork chop) didn’t go so well. Actually I had portioned it into 4 nice roasts, so I have 3 more tries for perfection

Oh, and I didn’t sear it either, as I figured I’d cut it into slices and give it a quick fry with butter for my breakfasts. The fat shoulder was nasty… Like eating lard. So, we have some lucky dogs

I want to do the second one now, and am thinking, 137 F for 3:00 hrs ? …plus, regardless of my time and temp, I’m going to score the fat shoulder, and torch that baby well

So obviously, this will be much different than my first attempt.

…unless someone here with more pork loin experience than me, thinks I’m taking this in the wrong direction ?

Ya’ know, one of the only things that bothers me about Sous Vide, is that one can find such a crazy wide variance in cooking times and temps… And I’m starting to think their is more to this, than just personal tastes ? I’ve actually had a couple SV fails, in which I used times and temps suggested by “supposed” pros… and I just cant imagine those fails would have been considered perfect “by anyone” … Hmmmm.

Chris, have you never had a guest request a Well Done steak, - dry and grey throughout? And they proceeded to enjoy it.

Perfection is always what the consumer says it is. I wouldn’t overly discount personal taste being the over arching factor when it comes to the enjoyment of food.

I’ve just cooked and served a batch of boneless pork loin roasts just like yours using 137ᴼF and my guests said, “best-ever!”. I might like a little more tenderness than you, so i usually cook them for 6 or 7 hours with always the same outcome. 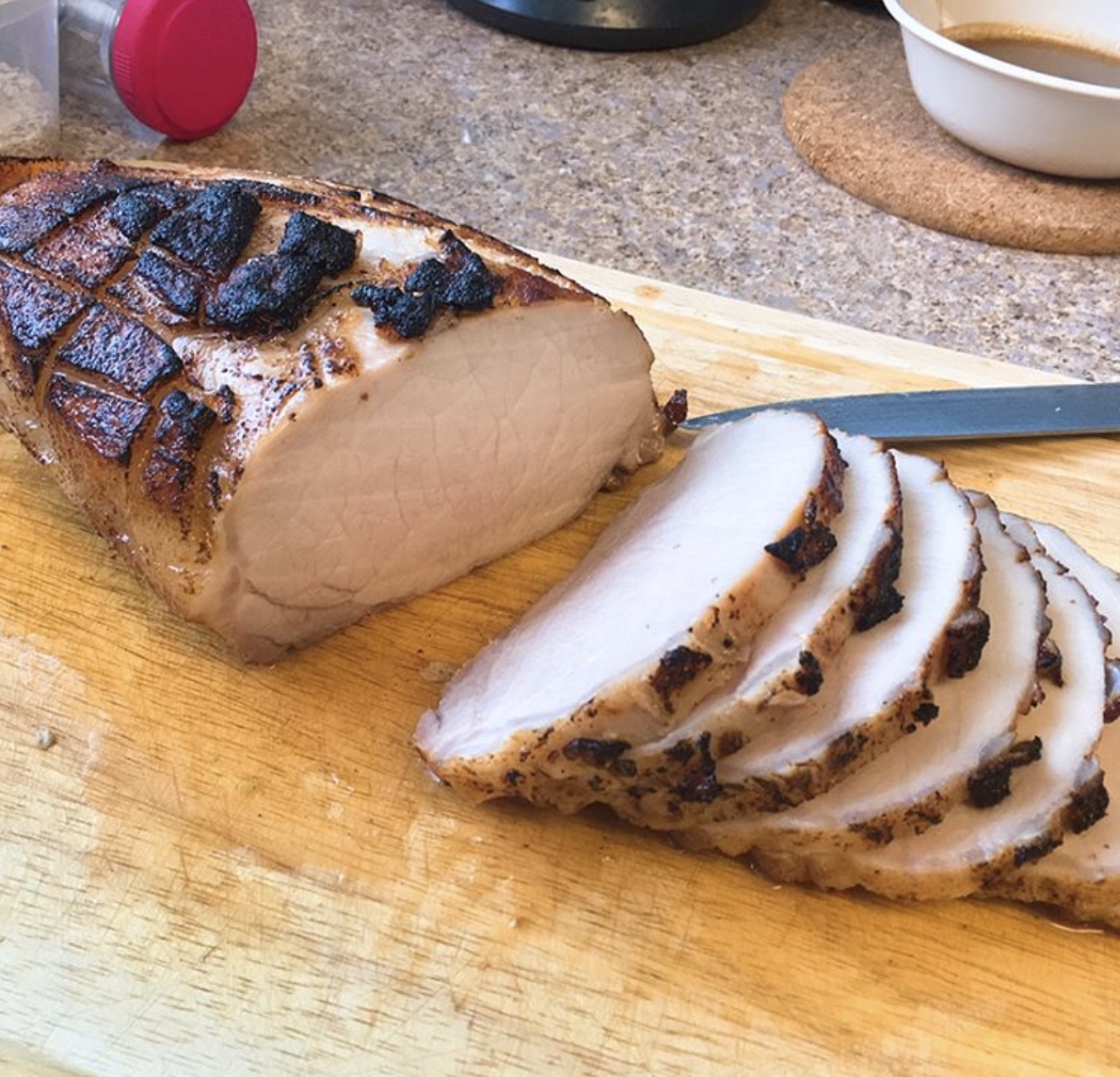 This sous vide pork loin recipe guarantees perfect results every time. With sous vide, it's impossible to overcook, and ensures your pork comes out juicy and tender every time.

No… I mean, I cant imagine the 150 for 6 hrs version that I first tried, being anyone’s favorite. I’m hoping the 137 F for 3 hrs will be really good for me too ! But also, like I say, it is most definitely going to be seared ! Even being a “fat eating Keto freak” the fat on that 150 for 6 hrs version was nasty ! Like freaking lard ! Would have the 137 F temp, made it any better, cooking for basically the same length of time ? Or, would searing help this ?

Yes, I saw this vid… But I have to disagree that its impossible to overcook with SV. I mean, it might be a lot harder to do, and it will likely still be edible… But this first one I did for 6 hrs at 150 F was about a 3 or 4 out of 10. Searing it might have made it a 4 or 5… but a LONG ways from perfection.

No one familiar with sous vide would make that claim. I was just pointing out time and temp

Moistness in terms of mouthfeel is mainly about fat, you’ve got the least fatty part of the animal. Broken down connective tissue (collagen) will also contribute to a moist mouthfeel, you have the muscle with the least collagen.

Collagen at sous-vide temperatures takes days to break down, there’s not much difference between three hours and six. The cooking time in this situation is mainly about the thickness of the meat (how long the centre will take to get to temp) then further time if you want to pasteurise the centre.

Not sure how you got nasty and lard in the same sentence.

If it’s rubbery (too firm?), then drop the cooking temperature. 137°F is a good start.

There’s other tables for how long various sises and shapes take to reach core temperature, they assume you set the water bath 1-2°C above the target. Below is from 2.277 Table 2, Cylinder shaped meat with a 15 cm length. MC has mistakes in the imperial conversions on this table so below I have only written metric.

I hope this helps

Lokio yes, that does help. Thank you. Also, I feel like the Pork Loin which I have going right now, will be much better… 137 F for 3 hrs. Next time maybe only 90 minutes ?

It’s not going to cook through in 90 minutes. How thick do you think it is? According to that table above if it’s 3 inches thick it’s going to take 2:30 hours for the core to reach 137F and if it’s four inches thick it will take 4:30.

It will not overcook if you let it go for an extra 2-3 hours, that’s the magic of SV. It will take at least 10 hours to become unpleasantly soft, maybe a lot more. You’re also improving the fridge life if you let it go a bit longer.

Well hey, I’m pretty confident about this one

Only thing that threw me off a little, was when I went to score the fat, before searing, the little fat squares started falling off… So I said, fine then. Pulled them all off, and reseasoned that side. Dried it well, then coated it with a little Mayo, and torched it

I think it looks and smells great ! Plus, without even slicing it, I can tell it is not rubbery or dried out all.

Will report back with my 1-10 rating after I have some for breakfast.

Thanks again for all of your input. 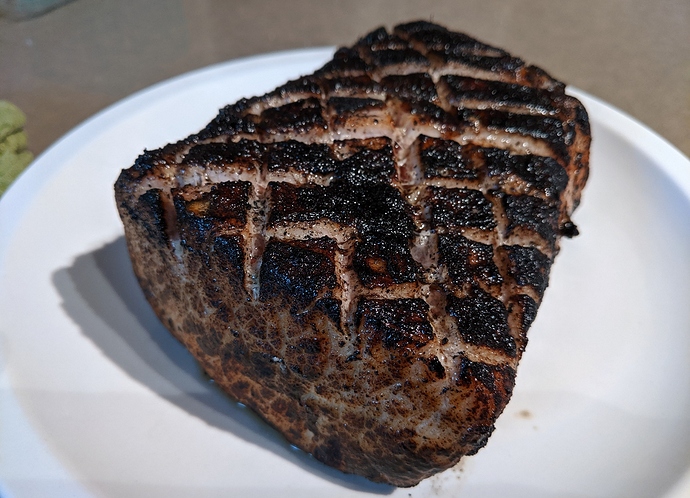 Modern commercial pork can be dry. It’s the nature of the way it has been bred. For so long people were told that fat was bad, so commercial pigs were bred to have little or no intramuscular fat. For this reason too pork is harvested young, before the fat really begins to develop. It’s difficult for those of us that actually want the fat development for charcuterie.

Pork loin is also solid, dense muscle. If you can get some meat from one of the heritage pork breeds you’ll notice a massive difference. Still each piggywig is different. You will always get some that is dryer than expected.

That said, the loin really needs little more than being brought up to temperature. Those piggies aren’t running around in a paddock or working hard for their tucker. I’m a fan of pink pork, but I know many aren’t. The 139F will give you a blush of pink which is stronger around the bone. This isn’t to everyone’s taste, but medium rare pork is fine and has been for a decade or more. There’s no longer a need to cook it to death.

I’ve suggested before to stick with Serious Eats methods for sous vide. If you keep going elsewhere for recipes and cook times, buyer beware. Here is the Serious Eats Guide to sous vide pork tenderloin (modify slightly for whole loins, but you get the idea).

Okay, but of course you know pork loin, and pork tenderloin is a completely different cut, from a different part of the pig, right ?

Pork loin is very lean, so it will come out dry, if you don’t brine it first.
Add 1/2 cup of Kosher salt & 1/2 cup sugar, per quart of water, & soak the roast for two or three hours. Then rinse & dry it, and vacuum seal it.

So brining will actually keep it moister ?

Why sugar? The meat doesn’t allow the penetration of this more that about 1/8 of am inch, unless you’re injecting said brine.

It tastes better, and it enhances caramelization, in the searing step.!
I use Coca-Cola (overnight) on a fresh ham. Delicious!

Chris, wrong. Different cut, of course it is but not from a different part of the pig. The tenderloin is part of the loin nestled beneath the rib bones.

You should try brining pork once, you might like the different outcome. Mojo’s brine formula is concentrated for a quick brine. I prefer a 4% concentration overnight which allows a little curing to occur. Don’t fret though, it won’t taste like ham which is injected.

Were you really considering a 90-minute cook?