Larding a Pork Loin for sous vide. Does it worth?

Till now I have done this kind of roast in my standard oven. As the loin is a very lean cut I usually inflitrate the meat with bacon using a “lardoir” needle (don’t know how you name this kind of stuff).
Do you think this is worth in a sous vide “roast”? Has anyone used this technique with sous vide?

You can certainly try infusing it with fat as you would in an oven (haven’t tried that myself).

I do think that your cooking time is very light though.

120mm is actually beyond the chart. A cylinder of meat at 95mm thickness would be 6 hours. I think for 120mm you’re looking at close to 9 hours for heating time.

RP, you can put away your larding needle, or use it. It’s your choice.

Sous vide pork loin results in a moist and tender item. Just realize that at 56C you will have pink pork meat and that bothers some people. Is that the internal temperature you cook to in your standard oven? I cook pork loin at 57C for the low side of medium-rare and the result is still slightly pink.

That’s a thick pork loin. Is that including bones? If so, i recommend removing the bones to improve cooking by reducing thickness. Six hours would be the absolute minimum time. I’d double that or more.

I always brine pork loin before cooking using a 4% solution over night. Adding a little Pimentøn de la Vera would replace the smoky bacon flavour, but that’s completely optional. I use Cajun seasoning in my brines which is slightly similar.

@fischersd: about cooking time, I have to say that the piece is far from being a cylinder because is 12 x 6 cm. So what would be, in your opinion, the right time?

@chatnoir: I’ve used the needle to infuse some smoked bacon. I think it will match well with the smoked flavour of the brine. Yes, I’ve had the meat in a brine, 7% salt + 3% sugar and a dash of smoked salt, for one day.
The loin has no bone, my description wasn’t very accurate, I’m afraid. I’m taking into account your recommendation and increasing temperature up to 57 ºC.
I love the Piment’on de la Vera and use it very often in the traditional way of doing this: mixed with extra virgin olive oil makes a good brine. We call this ‘adobo’ and gives excellent results. Next time I will use for seasoning the meat before packing. This time I’ve used grinded yellow mustard with some white wine vinegar.

Thank you very much to both for your wise advises. I will tell you how this story ends.

I love blushing pork and usually use 55C where there’s no bone. If there are bones then I increase the temperature a little to make up for temperature blocking density.

I’d just like to put in a vote against the use of a wet brine on pork. I realise the point is to introduce more moisture into the dense meat of the pork loin, but all of the moisture introduced is water. Therefore what you’re doing is diluting the flavour of those beautiful juices from what is a delicately flavoured meat anyway.

I see the larding as a much better option, though with sous vide temperatures there will be little melting of any introduced fats.

as you are talking about pork loin, one question… Is it possible to make pulled pork out of it?

Mejakm, not at that temperature and time.

Of course it is possible if you don’t mind a lean, less moist and flavourful outcome. It’s not my choice though, but i don’t care for any sweet, if any, sauce on my Q. If you use a sauce you might even enjoy it.

My favourite pulled pork BBQ is the whole hog style as it’s done in western North Carolina. Bubba’s in Jackson, NC, does an outstanding example. (Yes, there really is a Bubba.) It has the benefits of the variety of textures from combining meaty legs and loin along with the fatty shoulder and belly bits.

For pulled pork you traditional want lots of interconnective tissue so that it melts down to lovely, lovely gelatin. That’s the reason why pieces from the shoulder region are usually chosen. It’s not really about the fat.

You could cook it give you a slightly pulled texture at that temperature, but it would take a lot longer than that time. I’ve done beef cheeks at 54.4C/130F which could’ve been pulled. But it did take 3 days.

The breakdown of collagen into gelatin is a function of both time and temperature. At low temperatures it will take a long time, but it can be done. Most people prefer to run higher temperatures to hurry things along a bit and achieve the more traditional textural outcome.

Hey, I opened this topic because in the USA you have a lot of BBQ dishes that are mouthwatering but some of us (like me) that live in other parts of the world (I’m in EU) where this dishes aren’t common and they are served only in the american bbq restaurants, don’t know which cut of the animal we have to buy to make the selected dish. I would like that if it’s not a problem for you, to share with us the pictures of the whole animals (cut diagrams) with marked the parts of the animal that are t…

Don’t know if it’s too late to reply to the OP with a picture, but the cut used for pulled pork in the States is commonly called the butt or Boston butt. Note its location has nothing to do with the hindquarters! 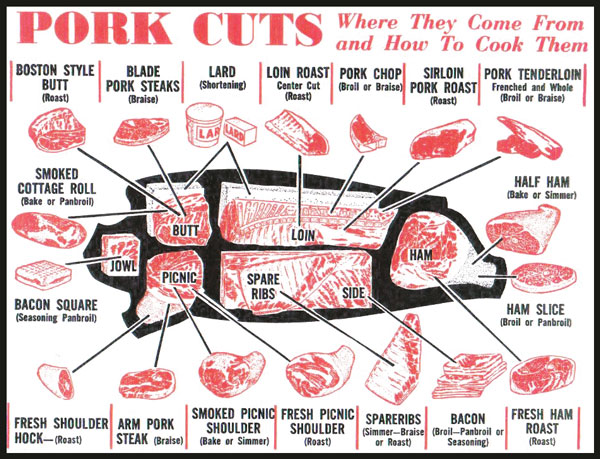