First impressions of the Anova Oven

Received the ANOVA Combi-oven today. Super thrilled because it happens to be bake day and we’d been without our full size range which generously decided to pack it in a couple weeks before the Anova was set to be delivered, giving me time to build the ANOVA a new home. Will post video on Youtube at some point. Like other users pointed out:

Sounding like I have a winner. Except when it came to sticking the sour dough poolish into the oven to proof. Typically I do this in an Anova water bath at 85.5F, but decided to give it a try with the steam oven, because trying to proof 5 buns in the steam bath in wicker proofing bowls is usually a recipe for disaster. So with the oven, I think you need to use the Sous Vide setting for proofing, otherwise once your preset is reached the oven assumes you’re ready to start cooking and automatically starts ramping up the temperature and FAST. This is probably the most impressive feature of the oven is how quickly it heats up. It took 2 minutes to get it from room temp to 356F. You can’t set pin point increments, even on the app. Whole degrees only, so the 85.5F I use for proofing needs to be 86F, but after the ANOVA reaches the set temperature, I noticed it doesn’t hold there, it starts to climb, over a period of 10 minutes it went from 86F to 93.5F and then held at 93.5F, which is 7.5F higher than I want. I was extremely frustrated by this initially, until I removed the lid off the container housing the poolish, probed it with an insta-read thermometer and found it was precisely at 86F and had doubled in size after 22 minutes. Pretty impressive actually. I imagine if I used the included temperature probe it would have done the same.

I mainly used the big range for bread and pizzas and occasionally a roast turkey. Had the oven been 3/8” wider (the interior is 16 5/8” approx - not 17”), my large turkey roaster would fit (I’m going to cut off one or both of the handle(s) and use a pizza peel to put it in and out of the oven) but unfortunately the same can’t be done to my largest Emile Henry casserole dish which means I’m buying the next size down. None of the cast iron pizza pans or grill plates we have fit, however, I’ve repurposed the lid off of a cast iron pot and it will fit (and work) for the sour dough bread boules.

So far so good and can’t wait to see how the bread turns out.

Side note: The oven does go to sleep after a set amount of time. When I came back into the kitchen after I had left for a few minutes, the display was only showing the WiFi and the Start buttons illuminated. Which is nice because the display is bright.

Great to hear you had an easy time getting it started and have good success proving your bread. Post some pics of your bread if you get a chance.

We’ve been using Breville ovens for years so we have a collection of pans, steels, cast iron etc that will fit this oven. Works out great.

How do you feel about the action and weight of the racks? I feel the racks are a little flimsy and the screeching sound they make when sliding is … unique. We have several cast iron pans we have been using as cloche and found that the top to the lodge dutch oven works well on the rack because of the handles. You can take it out without sliding the rack. https://www.amazon.com/gp/product/B000LEXR0K . Makes it easier to dump the banneton into it and then into the oven. Steel and peel works also.

Proofing the bread in the oven is insane! I need to slow it down some. If I need a fast proof though, it’s amazing how fast I’ll be able to turn out a load of sour dough bread. Maybe not great for flavour, but it’s sure scratch that itch fast! LOL.

Went to town and bought a replacement for the largest Emile Henry, exterior length with the handles is 15” so perfect fit.

Yes the oven racks are flimsy, but I’ve actually gotten used to that from having to rely on the GE convection-microwave who also has flimsy oven racks yet they still hold a fully loaded 11 x 17” casserole dish holding Mac&cheese or 8lbs of scalloped potatoes. The interiors are the same between the microwave and the Anova, stainless steel and are likely going to be a nightmare to clean, except I’ve been using a 6,000 micro mesh sanding sponge pad that removes the gunk and leaves a nice high shine, no scratches at all. I couldn’t even get baked on grease taken off with oven cleaner in the microwave, so it’s nice to have a back up plan for cleaning.

Already picked up some cookie sheets that fit, aluminum so we’ll see how that goes, not a big fan of aluminum and usually line it with parchment paper.

I’m in Canada so some of the items you mention might not be attainable in Canada but thank you for the leads anyways. I’ve seen Brod and Taylor videos on Youtube.

Best tip for cleaning baked on grease and crud from broilers and racks is ammonia. Put the racks and pans in a black garbage bag outside on a warm day. Put a small dish of ammonia in the bag and close it up. It helps to do this in the summer so the bag heats up in the sun. At the end of the day open the bag being careful of the fumes. Don’t breath them. Hose off the pans. All the grime comes right off. No scrubbing.

As far as cleaning this oven interior so far I’ve run the steam 100% below 200F for a while and then wiped it up with a towel while its hot and still wet. Seems to work so far.

I lived in Ontario. I don’t think you will have many issues getting what you want or need for the oven. For sure the shipping costs more, but most everything can go over the border.

O…M…G…Just pulled the boule out of the oven.

Is it bad form to want to just eat a whole loaf for dinner, or a snack?

I’ve aways considered my sour dough boules pretty darn good, but now I see the difference between a crusty boule that lacerates your gums and a crusty loaf that is like biting into, hard to describe, I’ve never had a sour dough bread like that before. The crust is crispy, just the right thickness of crust and the interior is pillowy and chewy. And the flavour! I’d have to develop my typical sour dough for 24h or more to get that taste. https://youtu.be/eHn4sbTO_aQ

That video was truly inspiring, I’m so glad you liked the bread so much and the oven made such a difference.
Can the oven bake French Bread at home with similar results?

. The oven is certainly wide enough to accomodate the mini baguettes I usually bake for sub sandwiches. I can see I’m going to be going on a bit of a bread baking spree here. Certainly that was the best sour dough boule I’ve ever had. That crust!

Thanks for your wonderfully detailed testimonial Sonja.

You can use your oven’s temperature probe to get precisely the same degree of doneness every time.

What? Stick the probe into the soft belly of my raw sour dough and have a hole in that pillowy chewy perfection after it comes out of the oven??? NEVER!!

The probe will definitely come into play when I start doing meat. My husband and I are over-cooked meat intolerant.

We regularly use a thermapen to test doneness on bread. 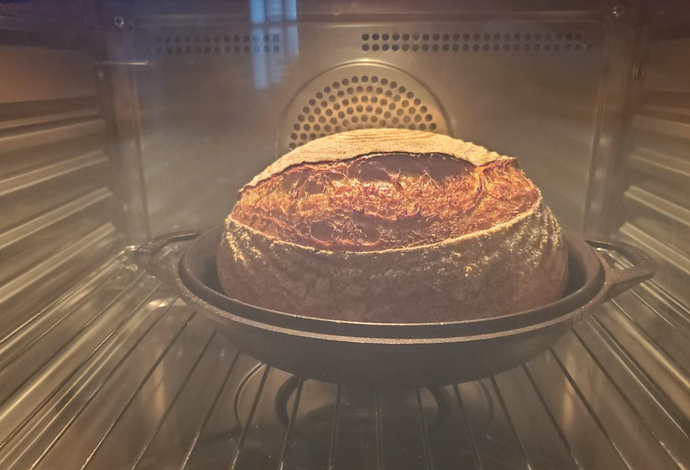 Sonja, too bad you just missed having your best-ever Thanksgiving Turkey.

Gentle steam assisted roasting will amaze you as much as your sourdough loaf.

I’m currently making what will probably be the best ever cinnamon buns following an Asian technique called Tangzhong, which is supposed to keep the rolls soft for days when baked in a traditional oven. Imagine what they’re going to be like when done in the Anova on Sous Vide setting?

How can you elevate your favorite dinner rolls to new levels of pillow-y softness — in one simple step? Ditto your old-fashioned sandwich bread, tender cinnamon rolls, and gooey sticky buns. The answer: tangzhong, the Asian yeast bread technique...

I’ve also used methylcellulose to have a similar effect. Of course that doesn’t seem all that wholesome, but when you experiment with modern food techniques you tend to have these things lying around. Good for gluten free products.

What you can get with Tangzhong (and methylcellulose) is more oven spring because it can hold onto moisture.

I ate 4 the minute they were cool enough to put the topping on without the topping melting. Normally I make massive cinnamon rolls but kept them small this time. Two pans, rotated half way through the cook cycle. 18 minutes @350F with 45% steam. They pretty much tripled in size from what I put into the pan. Tomorrow is going to be the real test to see if they are still nice and soft or if they get a little more puck like. Typically cinnamon rolls are only good shortly after they come from the oven. 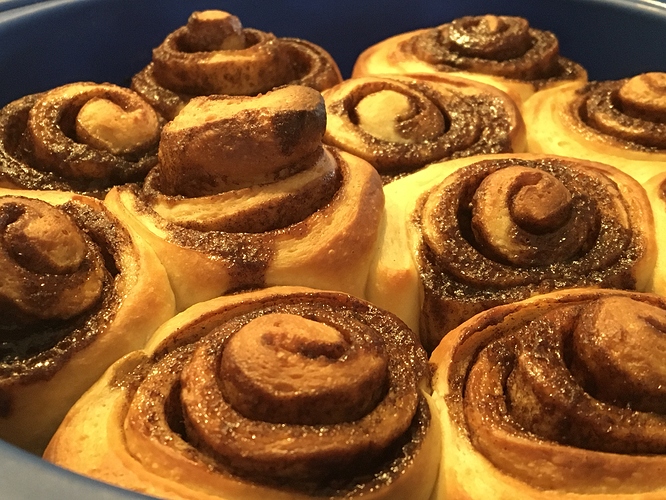 Thanks for the data! I love learning new things and the more scientific the information the more I like it! The Tangzhong was easy to make and I can see incorporating it in as a technique with other baked goods. Methycellulose is just plant pulp or wood pulp, it’s all natural, lol, so good to go! I’m so with you on the modern food techniques, where would we be without them? Cooking on rocks no doubt. Not that there’s anything wrong with that! I go enjoy my Raclette as much as anything.

That is one Instagram worthy boule! I’m a little timid with my scoring sometimes and barely scratch the surface, I need to go way deeper like you did. That’s a great photo!

I was going by what was recommended on another website. I had made the cinnamon roll recipe using the Anova Precision cooker and in the sous vide bath and they were even better than these, meaning there was no crispy bits at all, just very soft rolls, I probably should have gone 100% or even cooked them sous vide in the oven, but my brother was visiting and I wanted to get some rolls out fast. Thanks, they sure tasted great! I take the cinnamon and brown sugar and then pour a bunch of hot melted butter on it and turn it into a paste and spread it on the dough rather than sprinkling on the brown sugar and cinnamon.

or even cooked them sous vide in the oven

Interesting. I’d like to see that. What temp then?

The Precision Cooker recipe calls for 195F for 3 hours. They are cooked in a mason jar with a loose fitting lid, which keeps the moisture in the jar. I think I would go with the same temp, 100% steam, the probe and pull them when the probe hits 188 and keep them very soft. Because we were in a hurry, I also didn’t let these cinnamon rolls rise the full 60 minutes they were supposed to, so they weren’t as voluminous as they could or should have been.