I really wanted to sous Vibe a Turkey, Because Turkey can be sooo Dry but everything I saw online was Anti-whole turkey… Well, I DID IT! and it was the best Turkey I have ever had.

I made the bag about 30 inches long. The bag width was still a little small so I oiled the inside with olive oil and had a friend help me stuff the turkey into the food saver bag. It was TIGHT but it fit. I put the Turkey in legs first. (pointed end)

I threw in a few herbs and spices, and then sealed the edge of the bag. Because I put the Turkey in Legs first there is a lot of air in the cavity of the turkey. I flipped the bag, cut the seal at the leg end and then re-sealed it while removing the air.

But you want to leave a lot of bag left, more air will come while in the water bath. You will do this again in an hour or so.

I used a new 5 gallon paint bucket, set the Wand to 145 degrees. Covered it with press and seal wrap. After an hour or so there was a lot of air in the bag from the turkey. I took it out of the water bath. ( make sure you turn the wand off, the water level drops) cut a tiny corner and re-vac sealed. Now it was perfect. The Turkey had shrank a little, the seasoning started to spread.

With the Turkey in the bucket, I believe it was around 3.5 gallons of water.

I kept the turkey in the water at 145 for 5 hours.- Took it out. It was late so I put the turkey outside to cool for the night. (its 33 degrees here) The next day. I cut the food saver bag off. Saved all the juices in a bowel.

Put the turkey in a roasting pan. Threw on a few more seasoning and roasted Convection for 1.5 hours at 450. The White meat on this Turkey was so moist and juicy. The meat, the skin everything basically melting in my mouth. It was AMAZING.

I used the juices to spoon over the turkey a few times during the convection roasting. The drum sticks came off with a little tug, no knife needed. I am looking into seeing if a meat store can vac seal a larger turkey for me to try again. I also may purchase a second Anova wand to use 2 at a time if I need to use more then 4-5 gallons. 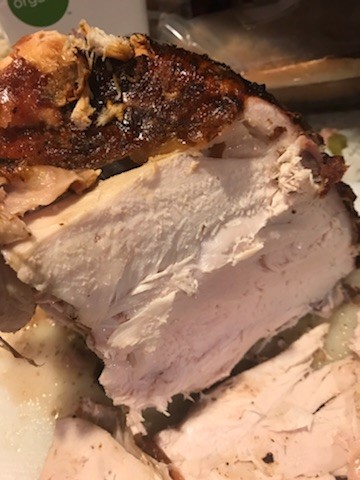 SOOO Moist and yummy., Will do this again!

Thank you for this post! I can’t wait to try this!

Wow! That’s amazing!!! Glad it worked out! (and that no-one got sick!)

Heh…and that no local critter made off with your turkey overnight!

I think the thing that scares a lot of people with cooking a turkey sous vide is the thickness aspect…and salmonella.

btw - some additional thoughts on doing this over here:
http://www.cuisinesolutions.com/blog/2014/11/26/how-sous-vide-whole-turkey/

That 145F for 5 hours should have been able to pasteurize about 8cm (3+") of turkey - which was likely just about perfect for that size of bird that you had.

I think that’s likely the key way to do this safely - the breast is likely the thickest - provided you calculate enough time to pasteurize the larger birds, you should be fine.

People will need to extrapolate from the information on Douglas Baldwin’s site to get those thicker cooking times.

Hi can you help I have a whole turkey I want to sous vide its 2.4kg and I’m wanting it succulent as yours sounded, any suggestions how long to cook it for.
Regards

I did a whole bird sous vide and it was great. I started by seasoning it with a rub and smoking it for an hour on a BBQ so it would have a smoky flavor. I then stuffed it with carrots, onions, orange wedges, apple slices and garlic. I lowered the bird into a super large zip-lock. Then I added about 6 drops of Liquid Smoke to a container of Swanson’s Chicken Broth and shook the mixture. I then poured about 3/4ths of the container into the ziplock and lowered it into the sous vide pot, sealing it when all the air had escaped. I then removed it from the water and put the bag and turkey into a second bag and repeated the lowering process. I used the second bag as a safety to prevent leaks. I cooked the turkey for 4 1/2 hours on 145. About every hour I would rotate or flip the turkey to make sure it was cooked evenly. After 4 1/2 hours I put the bags with the turkey into a sink of water and let it sit there for 30 minutes to cool down. Then the bags were placed in the refrigerator overnight. The next day at 4:30 PM I took the turkey out of the bag and poured all the broth into a container. I then put the turkey on a rack with an aluminum pan underneath and poured the broth over the turkey. I put the pan and turkey into large roasting bag and then put the whole shebang into a 350F oven. When the internal temperature of the turkey was 105 I removed it from the oven and cut off the bag. I basted the turkey and returned it to the oven until internal temperature was 140. I then removed the turkey from the oven and let it rest for half an hour while I made gravy and got other items ready. We ate at 6:30 PM and the turkey was moist throughout and very tasty. Yes, you can sous vide a whole turkey.