Has anyone cooked a turkey with their sous vide? I watched Guga on Sous Vide Everything, and his was a fail, the white meat was so dried out, I could actually see it when he carved the bird. He suggested 2 different temps, with 2 sous vide setups. I don’t have $$ or the room for that. Y’all have a time and temp suggestion for cooking the white meat and the dark in seperate bags, in one container and one Avona? Thanks in advance!

I love my sous vide device, but my preferred method for cooking a turkey these days is to spatchcock (butterfly) the turkey and cook it on a bed of vegetables. All of the skin comes out nice and crispy and there’s less chance of overcooking the white meat while trying to bring the dark meat up to temp. Plus it usually cooks in less than 2 hours.

There are lots of good videos on YouTube describing the technique. A good pair of poultry shears is a must.

Hello Steve! I assume you’re referring to oven roasting the spatchcocked turkey? Your technique sounds good, as I usually end up drying out the white meat:pensive: I’ll definitely check out the YouTubes, while still looking for a way to sous vide

Yes, that’s correct. It’s oven roasted. I would definitely consider using the sous vide cooker if I was doing just a turkey breast, but I don’t use it for whole turkey.

Here’s a pic of the turkey I did for last week’s (Canadian) Thanksgiving dinner. 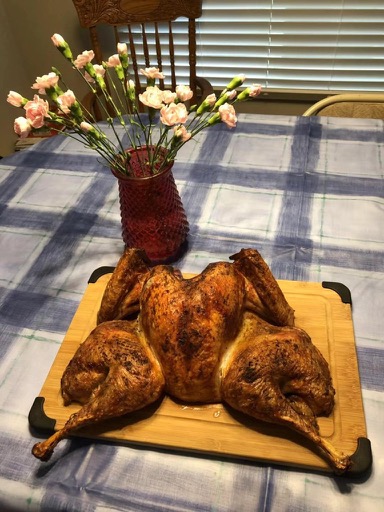 Never tried this but I’ve heard that you can break down the turkey and cook the dark meat first then reduce the temp and add in the white meat leaving both to cook until the white meat is done. One example I saw was 150 F for 12 hours to cook the dark meat and then reduce to 131 F, add the white meat and cook an additional 12 hours while the dark meat stays warm and continues to tenderize. There are numerous variations on the time and temperature. You could also do one, chill it in an ice bath when done and store it in the fridge while the other one cooks. Either store the second as well or finish right away by putting both in the cooker to heat until they’ve come back up to serving temperature.

Gslater thanks for your reply. I prefer the dark meat, and Hubs wants the white, hence my “dilemma”. lol I’m guessing that I could sous vide both a couple days before Thanksgiving, keep chilled and then heat back up with the sous vide. I’ll check it out.

I’ve tried cooking whole birds SV like turkey and duck with mixed results. You can spatchcock the bird and then put in the sous vide but you’ll want to be careful with any bones that may pierce the bag. I’ve had better luck following recipes from either Alton Brown or Gordon Ramsey. Alton tents different parts of the turkey with tin foil so all of the meat finishes cooking at the same time. Gordon’s recipe calls for stuffing an herb butter under the skin which makes for really juicy breast meat but it’s a messy process. I’ve always had great luck with those Reynold’s Oven bags, the meat comes out juicy every time but it’s difficult to pull the bag out from under the turkey afterward. On the bright side, if it doesn’t come out exactly right this time you can always try again next year!

Hiya FlashRodgers! Thanks for the response! I’ve also used the oven bags. and have rubbed herb butter under the bird’s skin, And yes, it’s a very messy process! I may start early, and sous vide the white and dark meat seperately. Then heat them both together using the sous vide on the big day. When I used the oven bag, I would cut the bag down the middle (after the bird is done) and used turkey lifters to pull it straight up and out of the bag onto the carving board.

I may have to invest in Turkey lifters, I always used wooden spoons or whatever happened to be on hand. It never really worked super well but clearly preparation is everything with cooking a turkey.

I got mine from my grocery store years ago, I just looked on Amazon, and they have oodles, from$5.00 and up. some come with basters, some with “meat claws”. I only use them during the holidays (good for ham too), but I sure am glad I have them!

I remove the skin from my turkey, and then debone the whole thing. Then I place the meat back in the skin, roll it up and tie or net it. I then Brine and SV. Absolutely perfect EVERY TIME

dlmason88, do you sear the skin after it has cooked? What temp and times do you cook the turkey for? This idea sounds like a possibility…

Jen2, I would have to verify my SV journal, I believe 145-150F for anywhere between 8 and 10 hours. I finish on a grill, have used gas and charcoal.

Jason Logsdon has an amazing Turkey Dinner video! Check it out at Sous Vide Made Easy/Amazing Food Made Easy. Well worth it!

I eat turkey meat a few times each week. Turkey breast is lovely when cooked sous vide. Usually I vacuum seal 400 grams with butter and herbs. Then I let it bathe for around 60 minutes at 64 degrees Celsius.

Just a reminder that the recommendation on poultry like chicken and turkey is for it to be cooked ‘to pasteurisation.’