Cooking a whole turkey with a Sous Vide

I did a whole bird sous vide and it was great. I started by seasoning it with a rub and putting some rosemary and thyme springs on top and smoking it for an hour on a BBQ so it would have a smoky flavor. I then stuffed it with carrots, onions, orange wedges, apple slices and garlic. I lowered the bird into a super large zip-lock. Then I added about 6 drops of Liquid Smoke to a container of Swanson’s Chicken Broth and shook the mixture. I then poured about 3/4ths of the container into the ziplock and lowered it into the sous vide pot, sealing it when all the air had escaped. I then removed it from the water and put the bag and turkey into a second bag and repeated the lowering process. I used the second bag as a safety to prevent leaks. I cooked the turkey for 4 1/2 hours on 145F. About every hour I would rotate or flip the turkey to make sure it was cooked evenly. After 4 1/2 hours I put the bags with the turkey into a sink of water and let it sit there for 30 minutes to cool down. Then the bags were placed in the refrigerator overnight. The next day at 4:30 PM I took the turkey out of the bag and poured all the broth into a container. I then put the turkey on a rack with an aluminum pan underneath and poured the broth over the turkey. I put the pan and turkey into large roasting bag and then put the whole shebang into a 350F oven. When the internal temperature of the turkey was 105 I removed it from the oven and cut off the bag. I basted the turkey and returned it to the oven until internal temperature was 140. I then removed the turkey from the oven and let it rest for half an hour while I made gravy and got other items ready. We ate at 6:30 PM and the turkey was moist throughout and very tasty. I needed to use about 3 pounds of weights to keep the turkey submerged. Yes, you can sous vide a whole turkey. 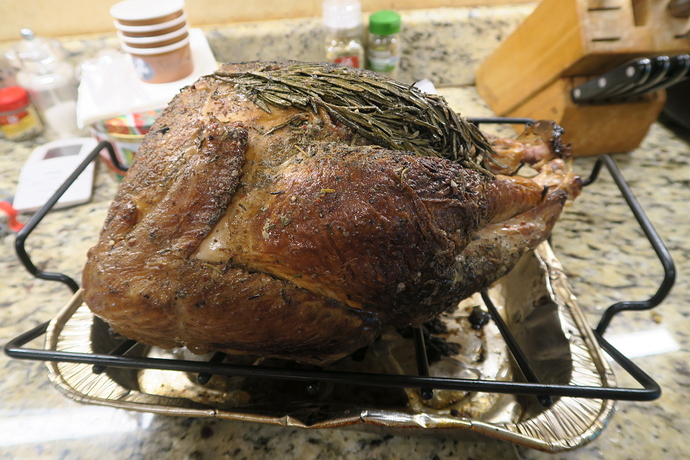 This describes a potentially hazardous technique because virtually all poultry contains dangerous Listeria and Salmonella pathogens. There would have been a considerable length of time in the danger zone as a result of the smoking, stuffing and packaging steps. The food safety clock started running when the turkey was removed from refrigeration. It would be useful (critical ?) to know if Pasteurization was attained by the 4 1/2-hour SV cook and the length of time it took to achieve.

The technique would be more safe using the same ingredients and either splitting the turkey in half or cutting into white and dark meat parts and SV cook. That will reduce the time required for complete heat penetration by about half.

My concern is that the vegetable and fruit stuffing insulated the interior of the bird which harboured the bacteria. They could also create air pockets that reduced heat penetration and required the 3 pounds of weights.

Interrupting the cook with a lengthy cooling and refrigerated interval could also introduced a significant period of potentially dangerous temperatures. If at all possible, it’s best to use a continuous cooking technique for poultry.

Even doing the second cooking in the oven until internal temperature was over 140 was not sufficient?

Was over 140F sufficient?
Don’t know. It’s as much a case of when as what temperature in cooking.

I do know that a lot of unintended cases of food-born illness are the result of unsafe cooking techniques and/or unsafe reheating of hazardous foods like poultry.

The risk with poultry is the bacteria produces toxins that are heat resistant. You can never know what you are starting with inside that bird, just a little, or millions of bacterium colonies. Over 40F you should know that bacteria can double as quickly as every 20 minutes. And that growth is geometric, not linear, as in 2-4-8-16-32-64, and so on. So if you are starting with a lot of bacteria in a few hours you can be in serious potential trouble. That’s why cumulative time and temperature in achieving the thermal death point of most pathogens is so important in food handling and cooking.

I have always used 4 hours as the absolute maximum time before Pasteurization is achieved in my cooking. After that, the potential numbers are working against you.

OK. I understand your point. But as I said, I smoked the turkey in a 300F BBQ without any stuffing for 1 hour, then added the vegetables to the cavity, put the bird in the bag and then added enough broth to cover cover over half of the cavity. Then with the cavity facing up I lowered the bag into the sous vide water. I shook the bag to get any air bubbles jogged loose and when all the air was out of the bag I sealed it and left the turkey in the 145F water for 4.5 hours. So it was cooked for nearly 6 hours before hitting the refrigerator and then was cooked for another 1.5 hours at 350F. Understanding your concern, I am not sure I have yet to figure out the “risk” associated.

Thank you for this discussion. I hope the Community finds it useful.
The risk associated with the described technique is not so much in the cooking, but in the nature of the product and the phased cooking process used. The risk is it might make you and those you serve very sick.

The risk is in the spores produced by harmful poultry bacteria which may become active bacteria while your food’s temperature is in what is commonly referred to as the Danger Zone, 40F to 140F. Our challenge as cooks is to minimize the length of time food spends within that temperature range. Using a technique that puts the food in the Danger Zone longer and more often than necessary is a risk taken. To keep bacteria at a safe level i use a cumulative maximum total time of 4 hours in the Danger Zone. That’s from the time the raw product leaves refrigeration until the cooked product is served. That’s a generally accepted foodservice industry standard and what most public health inspectors are taught.

An example of prolonging the length of time in the Danger Zone is frequently incomplete chilling. Using a 50% ice bath hastens cooling and should always be used to rapidly and completely cool your food. We know an ice bath requires about 3 hours to chill cooked food to 5C or 41F to a depth of 3 inches. (Baldwin 2008, Table 1.1) A wrapped turkey swimming for 30 minutes in water won’t do it. Heat transfers to ice water a lot faster than it will to the static air in a refrigerator. The packaged turkey’s interior likely spent much of the night in the danger zone. That’s a risk.

The improper handling and chilling of leftovers presents yet another risk.

P.S. Nathan Myhryvold, former Chief Technology Officer at Microsoft and the author of Modernist Cuisine wrote the following about the difference between chilling food in an ice bath and in a refrigerator:

Very interesting reading about food contamination. For people that are not chefs or in the food industry we do not know much about what was described about Listeria and Salmonella pathogens. Seems that partial cooking in the smoker, sous vide and oven are not how poultry should be cooked. This is good information to keep in mind next time I want to try something creative with poultry. I think I have gotten away in the past with undercooking a turkey for moistness. Last thing I would want is to have a big dinner party to show off my turkey and have everyone calling the next day heaving on the phone.

Glad to know you found those comments useful, Scott.

If you are finding enjoying a moist turkey a challenge, have you cooked a brined turkey yet? Once you do, you’ll not likely cook one again without it being brined. Same for pork and chicken.

I have brined and smoked my turkey the last 3 Thanksgivings. The smoke adds nice flavor but the brining is the real difference. I have never brined or used my sous vide for chicken yet. What would you suggest?

Scott, i suggest you cook the chicken dishes you most enjoy. Except for a Crispy-skinned Roast Chicken, SV cooking enhances most of them. The folks at Serious Eats have many chicken recipes that appear reliable.
Try one.

As for the brining, because of chicken’s smaller size you can reduce the time in solution before cooking, i’ve found 4 hours for chicken parts to be plenty. Being mindful of temperature control, i use a lot of frozen water when making the 4% brine. After a while your thinking about temperature will be a habit.