When we go to work we’re usually away for about 10 hours including travel time. I’d like to put a couple of steaks or chicken breasts (fresh or frozen) in an ice bath when we leave, set the Anova to begin warming up and cooking 2 or 3 hours before we plan to arrive home so the food is cooked when we do arrive. Anyone have any experience doing this? I’m assuming a small cooler like the Coleman 8 or 9 quart would be better for this than a plastic 12 quart Cambro container as it would keep the food cooler for that long without letting it get into the danger zone. Any suggestions on this or, as I suspect, is it just a matter of doing some test runs on a particular cooler without any food.

Yes, I have been doing this extensively for the last month. You are correct that a cooler will work better than a Cambro container. I have successfully done it using a container on the counter and using a cooler. The cooler works far better. The best cooler for our cookers (using ice bath) is the Coleman Stacker Coolers. This is because of the height. I have been using a Thermos Orange Cooler but my Coleman is coming from Amazon. 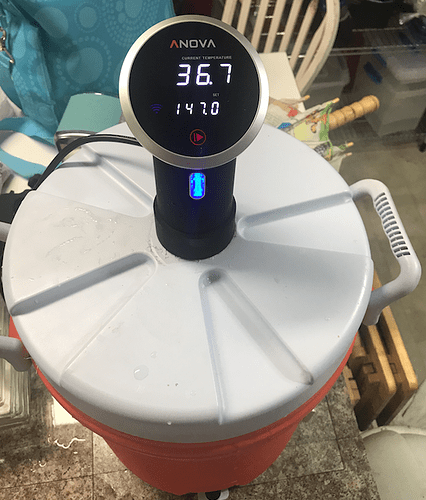 On Amazon Coleman has two pages of Stacker coolers. Which one are you using. Does a round shape like the one pictured work better than a square or rectangular one. What size are you using? I would think that since these coolers are insulated you could use a larger size than the capacity anova recommends. Thanks in advance for your help.

All the best,
Ted

I can’t speak for Southern Dad but the one that Anova used in their demo appears to be the 24-can Coleman Stacker
https://www.amazon.com/Coleman-25-Quart-Party-Stacker-Cooler/dp/B00363PSBE

Chef Nicole did a demo here

The key word to sous vide containers is insulation. Learn how to make the MOST effective cooking vessel with Anova's step-by-step sous vide cooler guide.

And she concurs that you can go larger capacity

Can I ask if you manually made a hole in the lid, or does the cooler have a removable cap or something? I’m rather nervous about wrecking things in good condition, even if it is for a good purpose…

You have to cut the hole. See the diy link above for the details.

I used a hole saw on a drill to make my hole in the orange cooler. I have been using the orange cooler because it is what I had. I ordered the Coleman stacker (blue one above) but it hasn’t arrived, yet. I use my cooler for the ice bath feature. The only long cooks that I’ve done so far are bacon but I’ve got a brisket in mind for an upcoming cook.

Southern Dad - what’s the size of the orange Thermos cooler you show? Since I have a 12 quart Cambro but since there are only two of us I’m thinking of something smaller for an all day ice back and cook. Wonder if any 4 or 6 quart coolers would be big enough for the Anova.

Do it all the time. We season everything before vacuum packing and freezing.
https://community.anovaculinary.com/u/Cooperd166

Newbie questions on this topic.

That orange cooler is really too large for just cooking for one or two. It is a five gallon cooler. I have ordered another cooler because the height is the difficult part. I want the Anova to reach as close to the bottom as possible.

David, I would not do this using a Cambro or other hard plastic container but these $5 ones from Walmart, I am not worried about. I freeze 1.5 gallons of water at the bottom of the container. Then add 1.5 gallons of cold water from the sink on top of that ice. This morning when I left it was 34.3º F and now almost seven hours later it is 34.8º F. I have no doubt that it will keep the food below the safe temperature of 40º F.

I’ll time it today to see how long it takes my 900 watt APC to go from around 35º F to 129º F. I’ll snap a quick pick when I start it and another when it notifies me it has reached temp. 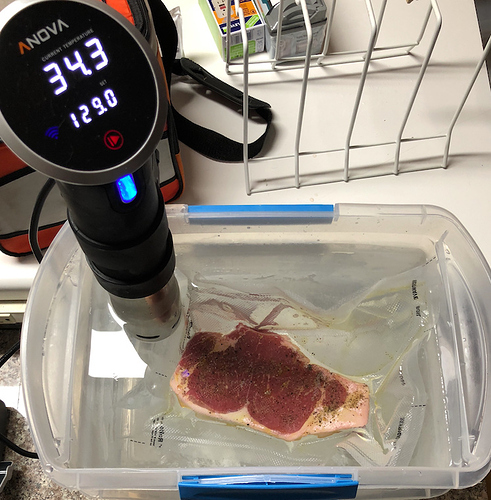 SouthernDad - if you’re getting this to work in a clear plastic container I would think there would be no problem getting it to work in a cooler. I’ll be very interested to learn how fast the Anova heats things up through the danger zone.

I’ve done it in a cooler, as well. Look back in the thread and you can see my orange cooler experiment. Okay, there was right at 3 gallons of ice and water when I switched it from ice bath monitor to pre-heat. The temperature was 35.1º F and it took the 900 watt Anova WiFi 40 minutes to bring it to 129º F.

I just watched an interesting Youtube sous video by Sousvideeverything (3 Brazilian brothers now living in the US who do a lot of sous vide experiments - well worth watching). In their latest they cook 3 rib eye steaks for two hours at 129, plunge them into an ice bath for 30 minutes and then into a freezer. They take them frozen in a cooler on a glamping trip, warm them up for 30 minutes in their sous vide container, sear them and declare them every bit as good as the fresh sous vide seared steaks they eat at home. From their videos they seem to be steak connoisseurs so I believe them. What this tells me is there may be no need to put steaks in an ice bath in the morning and start them cooking an hour or so before returning home. Sous vide and freezing them in advance should work just fine, especially since 30 minutes to warm them up seems to be enough. Plan to give that the try when my Anova arrives today.

If you haven’t seen them, check out their sousvideeverything Youtube channel.

I have seen their channel. It was one of the reasons that I decided to get into sous vide cooking. Precooking and freezing is one option. However, using my method this meat is never frozen. I pick it up from John’s Grocery here in Monroe. They cut their own meat on site. I take it home, season it, and seal it in the bag. It goes in my refrigerator until morning.

Sure there are many ways to cook dinner. Each has its pluses and minuses. The Ice Bath Notification is a great feature that has been added to our Anova WiFi Precision Cookers and in my case, it is something that I use often. On SousVideEverything, he talks about why he elected to purchase WiFi versions when he gets precision cookers. He likes to be able to preheat the water before he gets to the office.

There is a new sous vide precision cooker called Mellow that uses refrigeration to accomplish what I am doing with the ice bath. I love my Anova. It has a special place in my kitchen. I’ve seen the app evolving and improving, sometimes from our suggestions. Using the Ice Bath feature actually costs me pennies. I’ve used my TP-Link HS110 to measure the electricity used. It was so low that it barely registered.

We live too far from any stores to be able to shop regularly so the idea of cooking it and putting it in the freezer is attractive to us. But you’re right. Using the app to preheat the water before getting home would also be useful.

Here’s a good list of coolers to choose from https://under-the-open-sky.com/best-coolers-for-camping/. it’s the most complete list on the internet. I bought a good pelican cooler.