It is almost as if the Coleman Party Stacker 24 Can Coolers were built just for the Anova Precision Cooking Community. Mine arrived yesterday after taking a round about detour in the mail. I carefully considered all options as to the hole placement. Then drilling from the underside and using a 2 3/8" hole saw bit on my trusty DeWalt 24 volt drill, I bored the hole in the top left corner. Hole placement is not an easy choice. Once drilled it is permanent.

This cooler works well on the kitchen island. What makes this cooler perfect for Anova? It’s the height. Most coolers are too deep. We have to add a lot of water to get to the minimum line. Not with this cooler. The Anova actually will reach the bottom. The cooler holds five gallons of water when filled to the rim.

The really good part? It’s cheap. I got mine for $16 on Amazon but it varies in price between $16 and $25. Are you using a cooler? I use mine for ice baths as well as long cooks. 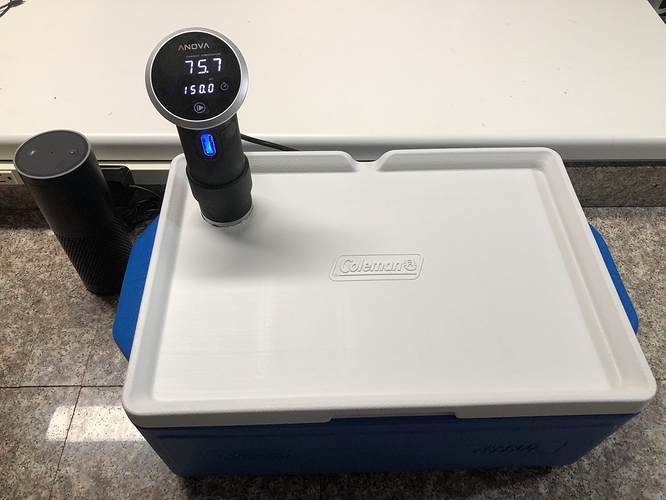 Super functional and that’s a great price, too. Thanks for sharing that.

I’m envious of the price, Thom. Here in Canada the cheapest I’ve seen are about $36.

Do you lay the food on the bottom of the cooler? If you stand the food in racks it seems to be it would use an awful lot of water. Just did my first cook in a Cambro 12 quart using a rack and was surprised to find I had to nearly fill the Cambro to the top to cover everything. Think I’ll put something on the bottom to keep the food off the bottom next time.

Maximum the cooler can hold is 5 gallons and that is to the brim. I have a brisket in there now. Let it cook until Saturday morning. It will be awesome. I’ve had it running since 4 PM this evening, so 5 hours and 38 minutes at 135º F. It has only used 0.61 kWh of electricity. That is the biggest advantage of using a cooler for a cooking vessel.

You just gave me the answer to the only remaining question I had.
I’m gonna drill from underneath the lid. Thank you.

I have added an outlet to my pantry and have the perfect shelf for it in there.

Mine isn’t a Coleman but, for what it’s worth, I bought a hole-saw based on the previous, now corrected, post stating that 2.5" (64mm) was the required size. Being a tad enthusiastic, I drilled the hole prior to checking the actual diameter of the Anova (yeah, I know!) and found myself with a somewhat over-sized hole in my cooler’s lid.

Luckily, I also had some old plastic vitamin capsule pots that I’ve been saving for a rainy day. I just cut the top 1.5" off on of those - it fits nicely, the lip for the snap-on lid stops it sliding through the hole and I have a handy lid over the hole for when I want to use it as Nature intended…

Sorry - my mistake; I must have seen the original size on another post. I didn’t like the original hole because it was a bit too roomy for the Anova, left a hole with nothing to cap it when used as a cooler and allowed bits of expanded polystyrene (styrofoam) to flake off the edges of the hole and drop into the water.

The Coleman Stacker lid is plastic. It doesn’t have anything like styrofoam to leak. My reasons for thinking it is the perfect cooler for our cooks is because of the height. The Anova is able to reach right to the bottom. The lid fits two sizes of cooler so you only have to drill a hole in one lid.

It was also only $16 so I use it just as a cooking vessel.

I bought a 12 quart Camware polycarbonate container with a lid (Coleman cooler on the way) and when I cut a 2 3/8 inch hole in the lid I found the Anova bottomed out on the bottom so that it no longer made a tight seal on the top. Does this happen with the Coleman partystacker too?

With the Coleman 24 Can Party Stacker the Anova will touch the bottom. But if you cut the right sized hole, this isn’t an issue. The hole is 2 3/8th. It will be nice and tight.

Thanks. That’s good to know. I did cut 2 3/8 in the Camware but the PC bottomed out.

I’m also thinking of cutting the top of the Coleman in half to make it easier to access the inside while in use. I read somewhere of someone doing that but I don’t remember where. Wonder if you’ve considered that.

I’ve seen many pictures with the top cut on the Coleman Stacker to make it easier to get inside when cooking but I really haven’t found that I need it cut open. If I am going to open it, I just pivot the cooler top but I do not open it that often.

Good point. I’ve been using the Camware square cooler where pivoting the lid doesn’t really open up any space. Of course the rectangular Coleman would. Mine should arrive today.

Is there a best location for the Anova when drilling the hole in the cooler? Corner vs Side?

I always do the corner to maximize how much space is available to use in the bath (as you may decide to get some really nice sous vide racks down the road to use in it…like the ones LIPAVI makes).

I went with the corner because that left me a larger usable space in the cooler. Also it makes it pivot a bit easier.