I’ve been looking to mod a cool-box as suggested in the frankencooler post, however the suggested Coleman cooler is way out of my budget here in the UK.

I’m currently looking at this cooler https://www.amazon.co.uk/gp/product/B00D50SQFS/ref=ox_sc_act_title_1?smid=A3P5ROKL5A1OLE&psc=1 as an alternative and would like opinions from you guys to determine it’s suitability and potential issues I may face.

Ideally I’d like to spend less on a cooler so if anyone has any other cheaper alternatives available here in UK at around the 20 liter mark, I’m all ears. (if possible, pictures and links of your setup would be most helpful)

Also from this YouTube video https://www.youtube.com/watch?v=sAqxxRHB4jI at around the 1.25min mark the gentleman suggests in some models steam travels area up the APC into the internal electronics in a air tight setup. I have the 800w Wifi & BT model, could this be a problem I might encounter?

From looking at the description and images, it looks like it’s a perfectly fine cooler for sous vide. If you want something cheaper, go to your local greengrocer and ask if they have a spare broccoli box. These are strong styrofoam with lid, and work well.

If you cut a hole into the lid (cooler or styrofoam box) such that the stainless steel shaft of the Anova just fits through, you will keep all the steam away from the Anova, so there should be no problems with steam messing with the electronics. (If you find that too much steam escapes around the edges of the hole, just cut another 10 mm hole somewhere else, to provide an alternate path for the steam to escape.

Thank you for your reply,

with regards to Styrofoam I’m sure I read somewhere people suffered with tiny pinhole leaks, so I’ve been put off as a long term container. Perhaps this broccoli box is made of tougher stuff, are you talking from direct experience?

Cheers for the steam tip.

As Styrene is a potential carcinogen, me, I’d likely not want steaming water vapours regularly flowing through my home from a styrofoam vessel housing a hot water bath.

Just about any cooler will work to use as an insulated vessel. Not a bad idea to contact the manufacturer of the cooler in advance to query if the plastics they’ve used will stand up to hotter temperatures in advance. (they likely will, as they often use the same materials for insulated drink vessels).

If the lid of the cooler is hollow after you cut the hole (using a hole cutting bit) you can try using some spray foam to fill the gap and provide some additional strength - just be careful as you’re applying as it expands as you don’t want it misshaping the lit. Then trim it up and seal the edge of your hole with duct tape. You can then use additional duct tape or electrical tape to get a really good seal for the hole. This will prevent any water vapours escaping and causing havoc with the cooling of your APC.

When you look at your APC, the exhaust vent for the heating area juts out - it’s the lower lip of that, that you want to sit on the top of your cooler lid.

Cheers, don’t know why I didn’t think of asking the seller a couple of questions, just dropped a couple over to them, one of was about the materials.

I’m probably reading it wrong but to me it seems as if the inside is Polystyrene, I’m put off if that’s the case.

Yep expanding foam with long nozzle to fill the whole lid was my plan to prevent extra heat loss should the lid be hollow which it probably is.

I’ve used broccoli boxes in the past as temporary party coolers with no problems. They are made of really dense foam that doesn’t leak. Not sure about the safety issues. With vacuum sealed bags, the food won’t come into contact with the water, so I wouldn’t be worried.

After reading the information here:

Polystyrene (PS) /ˌpɒliˈstaɪriːn/ is a synthetic aromatic hydrocarbon polymer made from the monomer styrene. Polystyrene can be solid or foamed. General-purpose polystyrene is clear, hard, and rather brittle. It is an inexpensive resin per unit weight. It is a rather poor barrier to oxygen and water vapour and has a relatively low melting point. Polystyrene is one of the most widely used plastics, the scale of its production being several million tonnes per year. Polystyrene can be natur As a t...

It does appear that you would need to get styrene much hotter for any elements to escape in the vapour coming from your bath, so there really shouldn’t be any health risks with using either a styrofoam container, nor any Polystyrene lined coolers. Indeed, we’re not even exceeding the boiling point, so they shouldn’t become brittle either.

Heh. Careful with the spray foam…it can expand a lot if you’re not careful.

I didn’t figure you’d fill the whole top, but I thought around the hole you cut would be good to add some strength & rigidity for the opening.

Yeah might as-well fill it all, the rest can will probably go to waste anyways. I don’t have any experience in using expanding foam but I’m thinking filling a layer at a time, waiting for expansion to slow and semi cure between layers. hopefully this will decrease the risk of the lid warping.

Well I’ve purchased ordered it now, will arrive 25th, will report back, might even add pics if I can figure out how to do it.

I have been using a Coleman cooler as a cooking container for the Anova for about a year now. Want to pass on two things from my experience. Firstly after cutting the hole in the lid for the Anova, I sealed the circumference of the hole using a hot glue gun. Much easier than using silicone sealer or spray foam insulator. Secondly, I have had no issues with ‘steam’. I use the cooler to cook meat and fish etc up to about 70 deg C whereupon it does not generate much ‘steam’. When I am cooking vegetables which require higher temps (85 deg C) I take out the Anova from the ‘cooler’ and transfer it to a large crockpot filled with hot water, allow the temperature to equilibrate, and cook the vegetables in that. The meat will carry on its own without the Anova as the cooker box insulation works very well. Meal can then be assembled from the parts.

Well the cooler arrived mid week (amazon ignored my delivery day request, luckily my neighbor was in to collect) my first thoughts were good, it felt decent quality.

My only reference point was my dads 20 year old thermos cool box, mine looks better build quality, apart from the handle feeling a little weak and the two stickers have been applied by a child.

The lid sounded hollow so on my way back from work on Friday I spent a tenner on some thermal expanding foam from Homebase https://www.amazon.co.uk/UniBond-White-Expanding-Foam-Filler/dp/B074KPZLXY.

Began the modification yesterday afternoon and to my surprise the lid wasn’t hollow. The black tape is a temp measure until I think of something more permanent. (I like the glue gun idea)

My first cook was 4 chicken thighs marinated in tandoori spice blend at 73.9c, they came out great. The cooler itself worked great as it remained cool to the touch throughout the cooking time and kept the steam in.

pics didn’t work, is there a size limit? they are each about 3mb 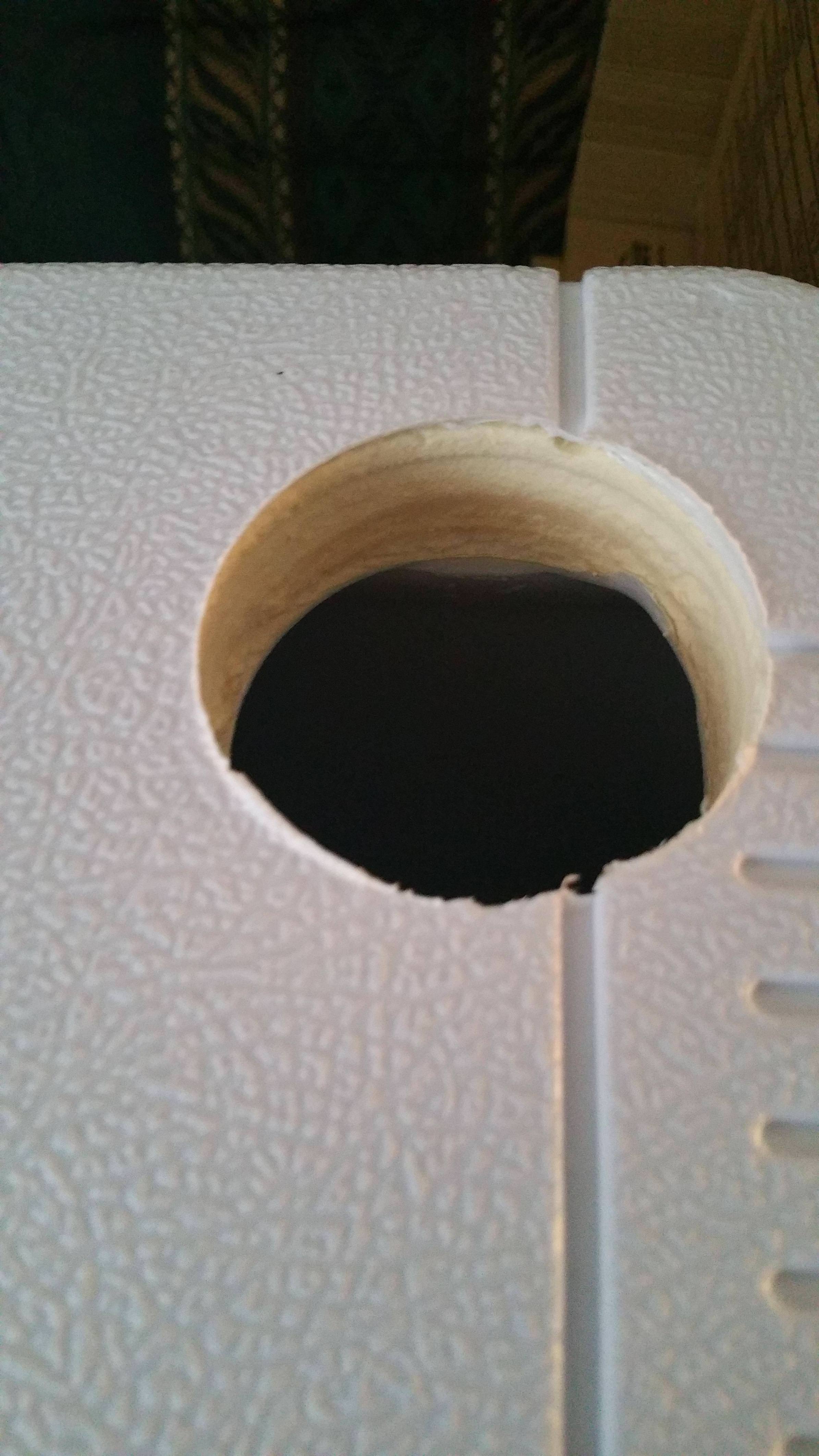 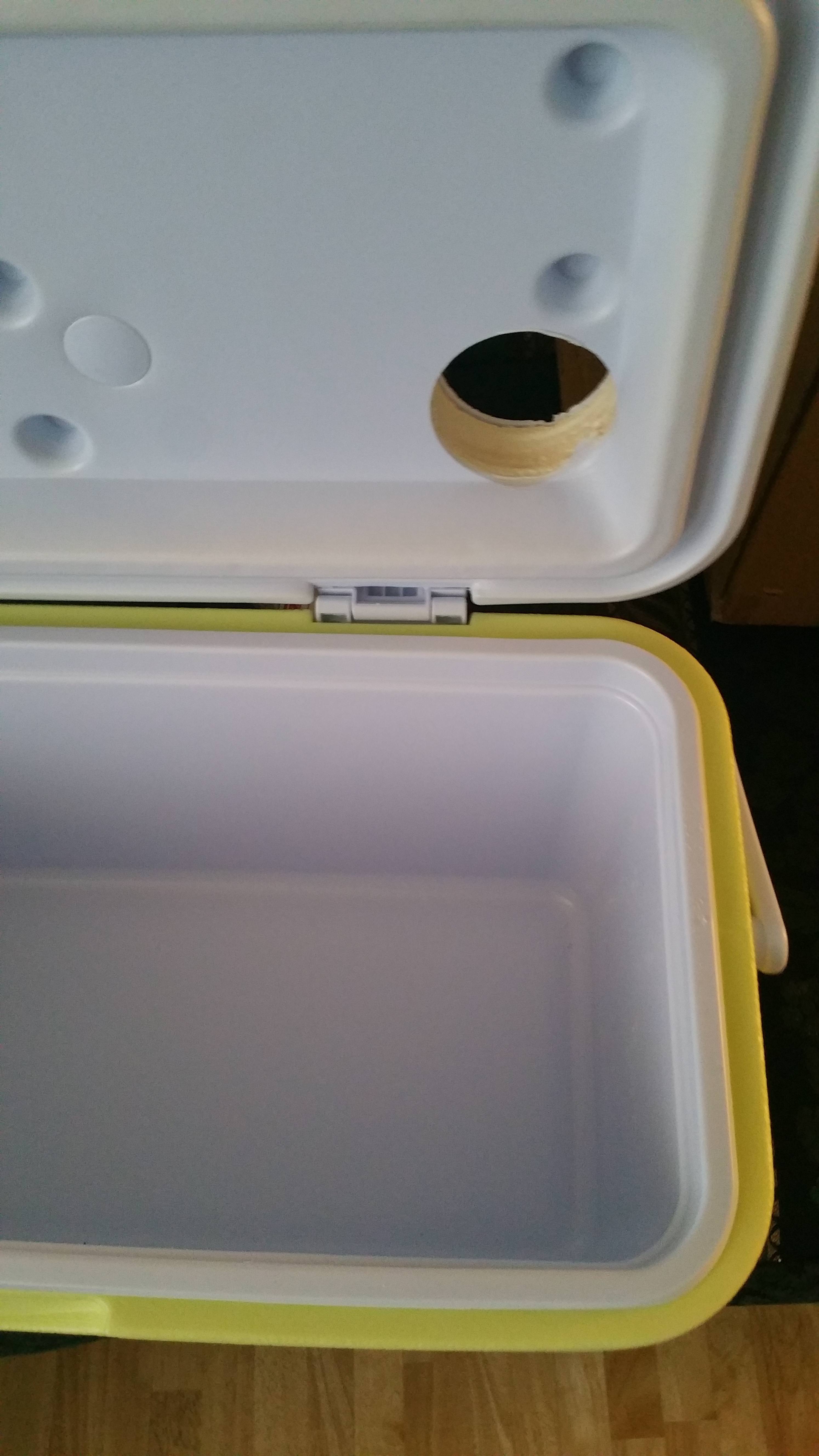 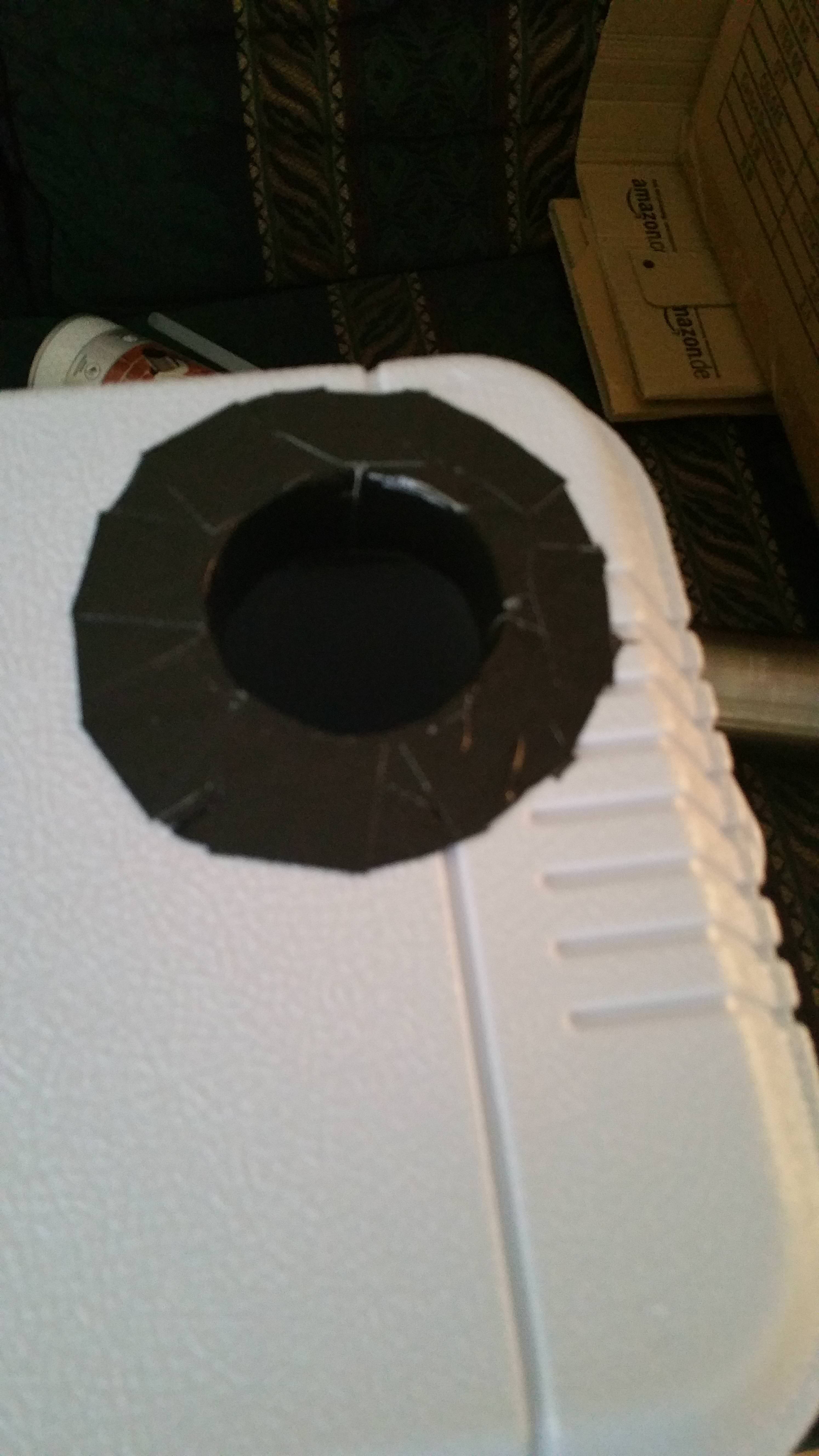 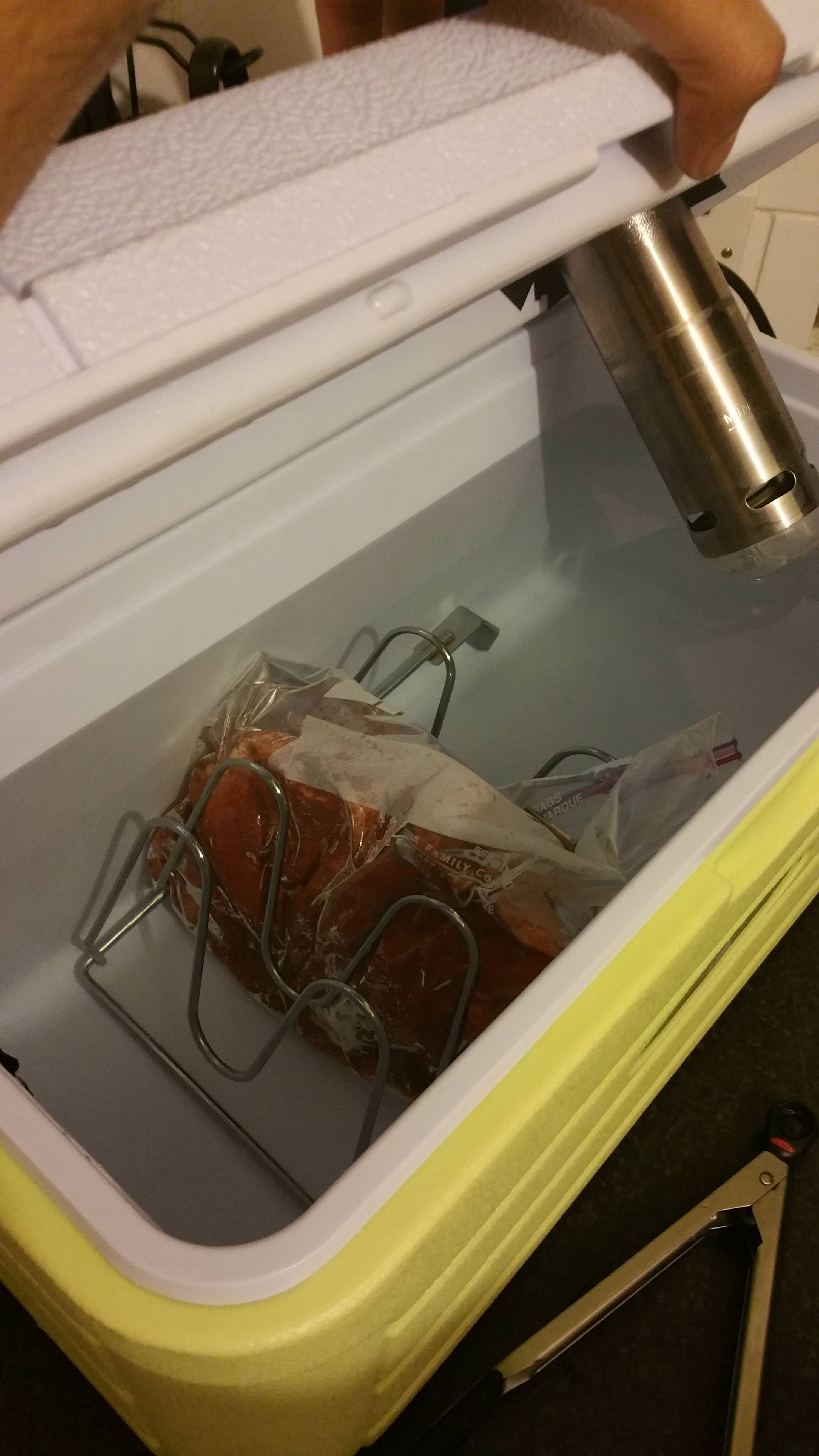 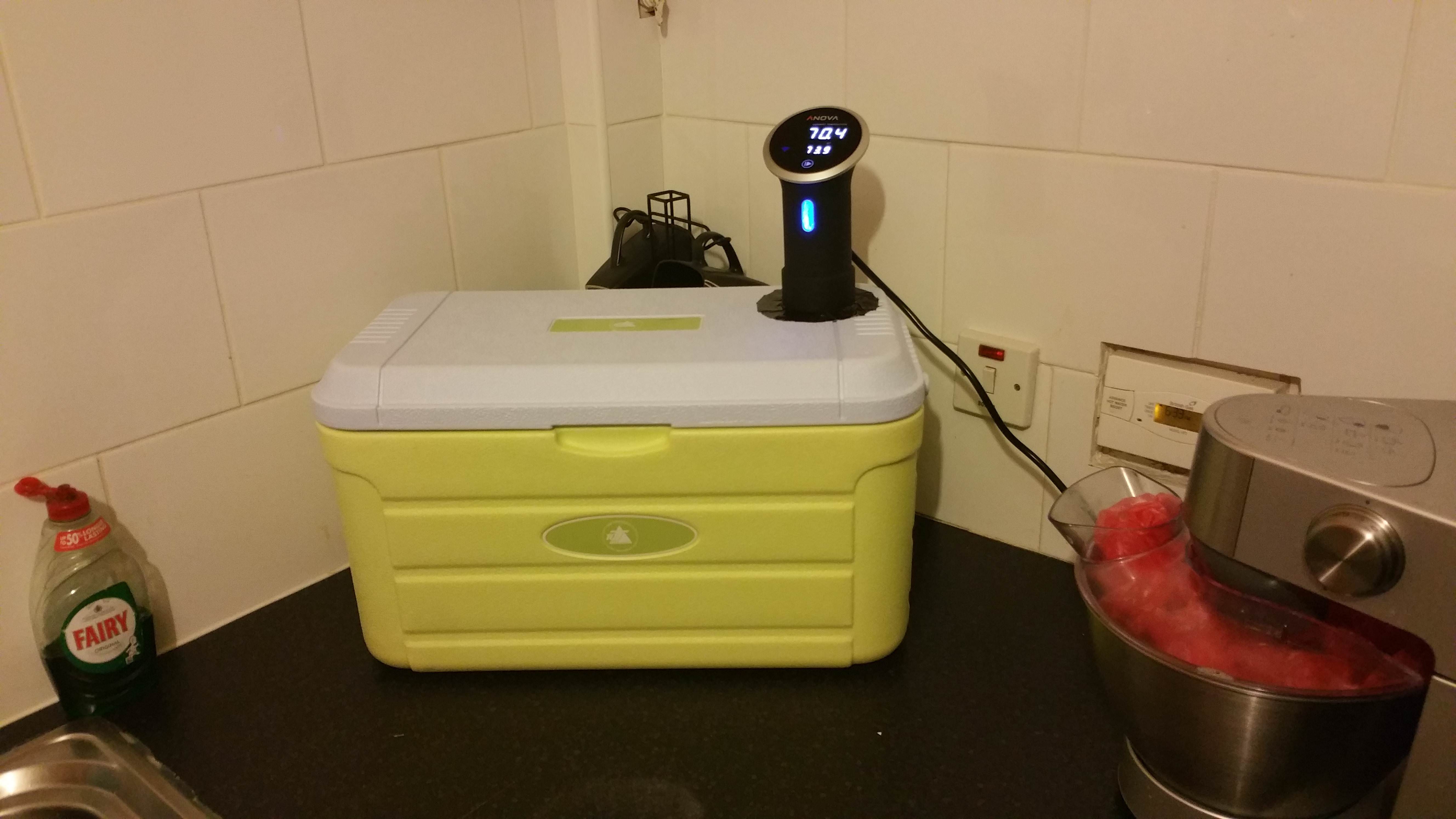 finally figured it out:)

@Mowgz Yeah, the photo thing on here can be a little wonky because there is a limit. Glad you got it working! I love your set up - yellow is one of my favorite colors.

Looks good! What “glue gun idea” are you talking about? (You really don’t want to glue your APC in place…you want to be able to remove the skirt on a regular basis so you can give the probes, elements and impeller cleanings).

Fischer I was referring to [quote=“nigelsan, post:10, topic:10274”]
I sealed the circumference of the hole using a hot glue gun. Much easier than using silicone sealer or spray foam insulator.
[/quote] not actually gluing the APU but sealing exposed foam with hot glue.

The tape I used although heavy duty isn’t adhering to the cooler well and come loose.

On the plus side the cooler is really holding temp really well, I’m super impressed. Last night I cooked at 60c then when finished I removed the APU leaving the hole uncovered, today approx 22hrs later when I put the APU back in, the temp read 34c and my normal room temp is about 22c.

Hi Mowgz, thanks a lot for finding this cooler, and the tips. It is still available from Amazon UK, and still on offer. However, I searched and found an even better deal at under 40 Euro including delivery, which is better for me as I live in NL. Looks to be the best value alternative in Europe as I found nothing else of similar dimensions below 70 Euro. I also failed to find the Coleman here, and excessive delivery and customs to ship one from the USA. So, I’ve just placed my order, to use with my very recently received Nano.