I enjoyed the FrankenCooler article, but I have one concern – the placement of the hole. Since the hole in the cooler lid supports the Anova unit (so there is no need to clamp it to any container wall), why did they place the hole towards one end of the cooler? Why not drill the hole in the middle of the lid and make it easier (and faster) for the circulator to evenly heat the water?

You really should have asked that on the existing thread, rather than creating a new one.

@HunterC - maybe you could tack this onto the thread in question?

You are right that the placement is arbitrary for the actual functionality of the Anova, but it does give the attached cord better reach.

Good idea, This is the link to the existing thread: http://community.anovaculinary.com/t/best-vessels-containers-for-precision-cooking/376/21

Fischersd – I did my “due diligence” and searched for “Frankencooler” on the community forum page first. The search returned no results, so I had no idea that this thread existed.

Since you seem to know a lot about the Anova Community Forum, what is the best way to search the forum for existing threads?

Actually, the article in question is on the Anova site, but not the community forums (so, you could have just asked the question there in the comments section - as others did).

When discussing an article that isn’t part of the community, you really should post a link to that article when you pose the question so people can reference exactly what you’re talking about (e.g.):

The key word to sous vide containers is insulation. Learn how to make the MOST effective cooking vessel with Anova's step-by-step sous vide cooler guide.

And (now that I’ve reviewed that article), two things:

Does anyone know if the 25Q Coleman party Stacker cooler is deep enough for the Anova One (non-adjustable clamp)? I’m going to pick up the 33Q but the smaller one may come in handy as well. Thanks!

Funny, when you go to the 25Qt coleman cooler on amazon, the “customers that bought this also bought” has the 2 3/8" hole saw as well as Anova PC’s and some sous vide racks

The PC (at least the rev 1 wifi) - presuming rev 2 has the same dimensions is 8 1/4" from the skirt with the exhaust vent to the base. Amazon says the cooler is 38.1cm high, so, that should provide more than enough height for the PC.
(even if turns out to be slightly too shallow to have it dropping all the way to the vent, the hole is still enough to support the PC - it’s fine sitting on its base at the bottom of your bath.

Oh…and, remember - the PC is only officially rated for 20 quarts/5 gallons/~19 litres of water - if you DO opt for a 33 Quart cooler, make sure you help it along by filling it with hot water and maybe a few kettles full of boiling water, so you’re not over-tasking the heating element of the PC to bring your bath up to temp (also so you’re not waiting as long)

Thanks! The unit I have has a flat bottom and exhausts from the side near the bottom. I’ve read various minimum depth requirements online, even from official ANOVA literature so it’s pretty confusing. I currently use a thick styrofoam cooler that’s on its last legs and a massive plastic cooler that I only use for large gatherings, ribs, etc. I nearly always start with hot water.

Whoops! My bad - completely skimmed over that you have the Anova One. Sorry about that.
Presumably the skirt is still removable on the Anova one, so you can remove it for cleaning? When you do so, that’s when you should measure the diameter of the skirt - you may need a different sized hole saw for that unit.

Really, it’s going to depend on how far you’re able to get the unit into the cooler. Seeing as how the clamp really can’t be removed from the Anova One, you have a smaller amount of the skirt that could get through the hole. I think you may really have to do a more traditional cutout, where you leave room for the clamp to mount on the sidewall of the cooler. That way you’ll get the Anova One deep enough into the cooler to maximize its range for water depth.

Thanks again for the quick response. I went ahead and ordered both the 25 quart and the 33 quart coolers to replace the ones I’m currently using. Hopefully the smaller one has the right depth…if not, I’ll find another use for it! Regarding your question, yes, the skirt on the A1 is still removable. I can’t find my calipers but I’m hopeful that it’s the same size and the hole saws I have access to!

Been reading about condensation issues with the cooler hacks. Is it best to seal the shaft of the APC or leave room around it so water can evaporate? ChefNicole seems to show a fairly small opening, making for a tighter fit. Some forums have mentioned that if there’s no where for the evaporation to go, it can seep from under the unit where the element connects into the electronics.

What condensation issues? If the unit is virtually airtight you’re going to minimize evaporation.

Also, steam coming up around the unit would be prone to going into the vents at the back of the head - where the electronics are.

As for coming up, via the shaft, think it would be pretty unlikely any steam could get through there…if a marginal amount did, think it would get picked up by the exhaust fan.

im having an issue where i set the anova in the cooler and it blows past the temperature. example, i just set it to 159 and it climbed all the way to 167 and its holding at 164. 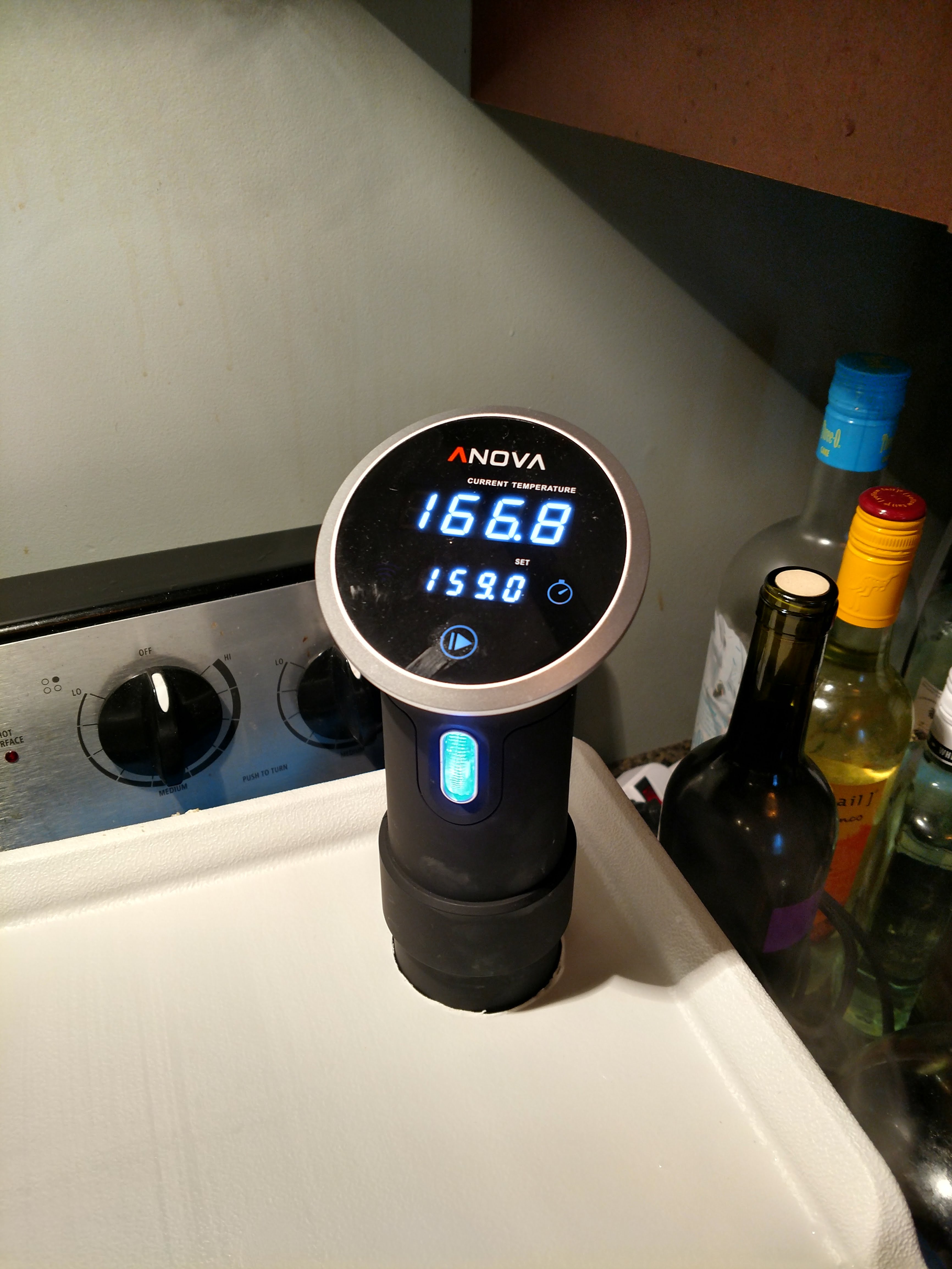 Has anyone tried placing sheet of plywood over the lid of the cooler, then filling the gap between the bottom of the plywood and the top of the with injectable foam installation? It seems like the raised lip around the top of the lid would contain the foam, except for the notch, which you would use that the opening for injecting the foam. Seems like the foam either would adhere to the lid, or else could be glued. Also seems that, if you used a bit of wax paper under the plywood, there’d be no problem removing it, once the foam dried. Yes, the result would be ugly and crude, but it seems like it would solve the fundamental problem of the cooler being insulated on the bottom, but not in the lid.

Notch? (what notch?). If you use a hole saw, the APC can either be suspended by the lid of the cooler or rest on the bottom of the cooler for support. It’s a better solution to not cut a notch out of the cooler lit for the APC’s clamp - just use it without.

Me, I like using a 2 1/2" hole saw (rather than 2 3/8" - the actual diameter of the APC) - then I can line the opening with a softer material. What would be ideal, would be a rubber grommet with an internal diameter of 2 3/8" - then cut your hole to match the manufacturer’s specifications (for the grommet).

Where spray foam can come in handy for cooler lids can often be to help seal/strengthen the sides of the hole - if the cooler lid has a hollow top. You do need to be a little careful though - the foam tends to expand and you don’t want to bulge out your cooler lid.