I offered the following details to ‘Customer Support’ of Anova. They suggested the Anova Community might be interested. I live in Geelong, Australia ; the details are in Metric. I looked at the idea of showing the figures in ‘Imperial’, but the decimal places were mind-boggling. Diameter of metal portion of wand is 60mm = 2.362205 inches. LOL !

‘Stepped PVC Pipe Joiner’ was perfect, ( see note below ). Lid of cooler was only 10mm thick. It relies on two plastic walls and ‘air’ in between as the insulator. I cut a 66mm diameter hole thru the two piece roof/lid. I used sandpaper and a tradesman’s replacible blade knife to tweak the soft plastic into the right diameter for the Outer lid hole at 74mm ; which only took 30 mins. The ‘Step’ on pipe joiner sat perfectly inside the lid cavity. The Anova Precision also sits perfectly on the inner ‘step’ of the pipe joiner. The joiner was cut, so it would only protrude 5mm above the lid of the cooler.

It took me 60 mins, of gently hand sanding, with 240 grit wet & dry sandpaper, ( remember to use water as a lubricant ), to make the inner hole of the pipe 61mm in diameter, and an absolutely perfect sleeve for the Anova Precision. Hole is on hinge side of the plastic cooler. I can’t use the official Anova black screw clamp. We will see if there is any vibrations, that will damage the cooker, while cooking.

I used two part epoxy glue from America called ‘PC Super Epoxy’, ( a brilliant product ), to permanently glue and seal the pipe into the cooler lid. Glue was used inside lid cavity and on both sides of the 10 mm deep hole.

The ‘Anova WiFi Precision’, when installed, hangs 45mm above the inside base. It requires 5 litres of water inside the cooler, to meet minimum water level for this model of Sous Vide wand/stick.

My first cooking attempt was brilliant. No vibrations from the extremely well balanced Anova wand/stick. Walls of cooler remained at room temperature during the 3 hour cooking session, and minimal heat loss thru the lid/roof, which was warm to the touch. The vent on the back of the Anova is not blocked, which is good for cooling the wand, and it prevents my FrankenCooler becoming a pressure cooker. There was also no hint of water evaporation or condensation on the outside of cooler.

NOTE : My next step is to go back to the hardware store and try and find a Rubber Bung to fill the hole. Then the Coleman can be used as a genuine ‘cooler’.

P.S. Added bonus of ‘Sous Vide’. Water stays warm in the cooler, and can be used to wash the dishes. 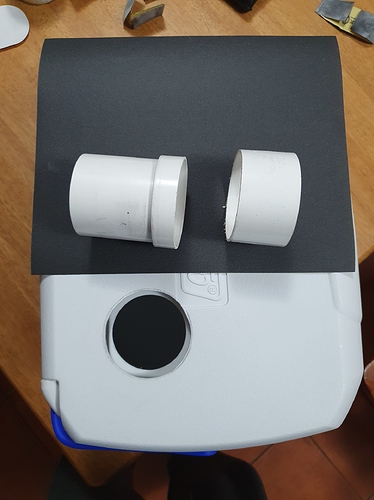 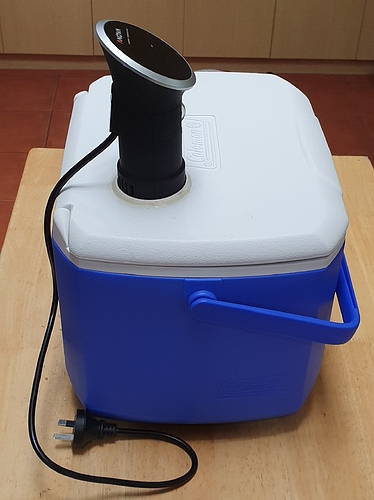 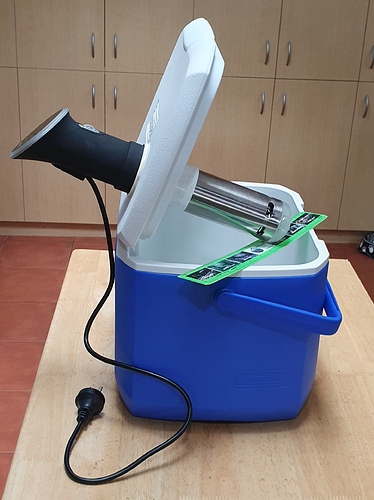 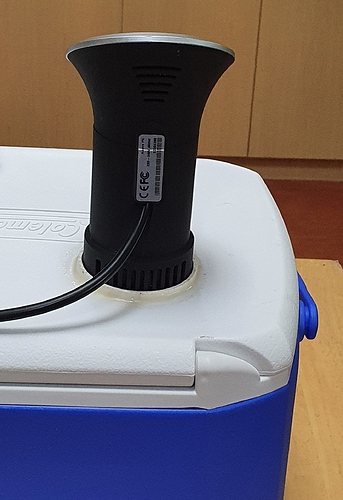 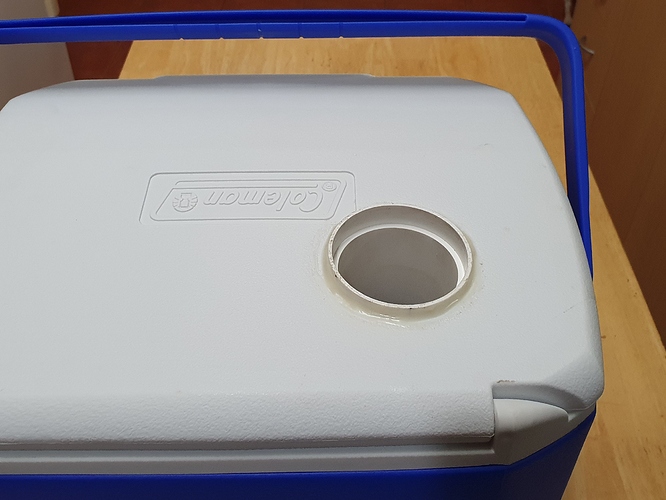 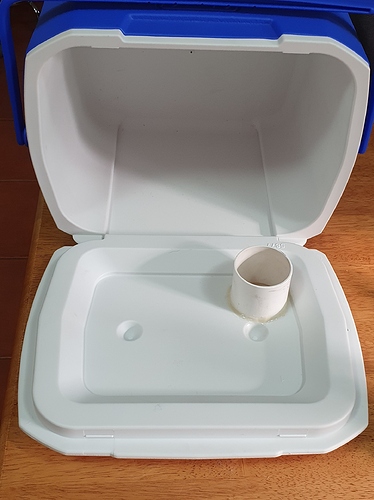 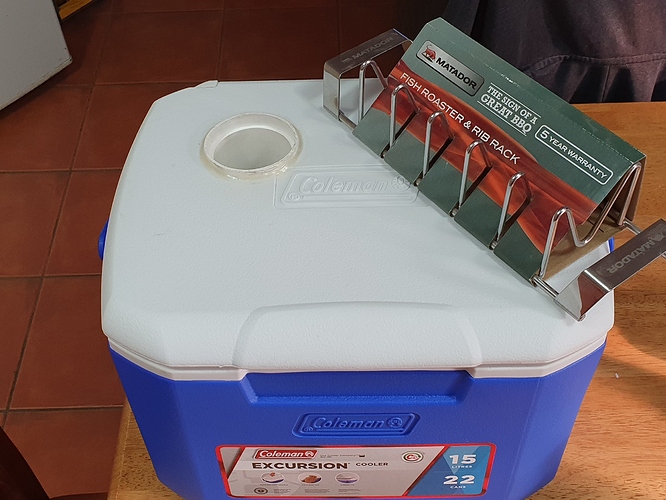 This is one of the best ice chest cooker modifications I have seen. I particularly like how you have been able to seal the air gap in the lid. You could make a cap for the hole and I think you could still use this as a cooler

Thanks John. “You read my mind”. I did look for a rubber bung, to act as a stopper, on my trip to the hardware store. Nothing appeared to do the job. I then took my cooler, pipe joiner and PC-Super Epoxy glue home ; to start my build. … I have now updated the above story, with a few more notes, so all the ideas are in one place.

BTW ( By The Way ) The metal Fish/Rib Roaster appears in one of my pictures. It is used to hold the food, in a manner to allow full circulation of the water. IKEA has an Expandable Pot Lid Organizer, that also looks good, but a bit expensive !

Awesome job… I’ve always used coolers both conventional plastic & Styrofoam cooler and prefer less evaporation and less taxing on the unit. Thanks for the bullet-proof way to totally seal the container!

Thanks for a great idea and instructions!

UPDATE. I have used my Coleman Frankencooler, 3 or 4 times ; with great results. A new problem has just developed. My Anova Precision will no longer fit thru the plastic sleeved hole ? ( And here was me thinking that I would be the only thing, with a weight again due to great ‘Sous Vide’ cooking. LOL ! )

The last cook was ‘mashed potatoes’ cooked a high 85oC or 185oF for 90 mins. The Anova has a diameter of 60mm. The plastic sleeved pipe has now shrunk to 58.9mm. I wonder if the high temperature has baked, then shrunk the plastic ? … Looks like I need a bit more 240 grit wet & dry sandpaper.

I am also thinking. If the sleeve ever becomes loose, then I will wedge wooden ice-pole sticks into the top and bottom opening of the cooler lid, to keep the Anova tight / firm, while cooking.

Hi Peter how did you get on with the sizing problem? Also where did you get the step down joiner? I’ve been looking in Bunnings and Reece but they don’t have that sort of size

I did a bit more sanding, to make hole a bit bigger. The Anova fits perfectly and minimal movement. No need for wooden icy-pole sticks, to pad out the hole. The inside ‘step’ or ‘lip’, is still perfect.

I am in Geelong, Victoria, Australia. I purchased TWO of the ‘Stepped PVC Pipe Joiners’, as I call it. A spare unit, just in case my fiddling went wrong. Their real name is 'Jointing Socket’, and they have a barcode ‘9 312703 003525’. I am guessing it is used to join 65 mm PVC plastic pipes. ( Bunnings in Australia, is massive hardware store, and is the equivalent of Walmart in America. )

If you have no luck finding one, left me know. I will snail mail my spare unit to you. ( I am not sure how we can take this conversation offline, so we can share email / snail mail addresses. ) 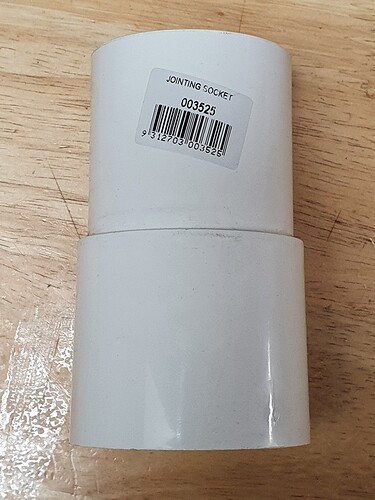 Thanks Peter. I am in Melbourne so will keep trying different stores. Maybe I was just describing it wrongly.
PS. I’ve ordered the Anova oven but still want to do the cooler thing for long cooks.