I’m wondering if pressure drives moisture loss. If steak (anything) cooked in a vacuum sealed bag will lose more moisture than one that is only under the pressure of the water (unsealed bag).

What do you think?

I really don’t think so. All meats release gases and liquids as you cook them, so I really think any delta would be virtually impossible to detect.

If there is any difference between the two it is likely to be negligible.

Pardon me if i sound too scientific in the following explanation.

I don’t think it makes a difference. Vacuum sealing serves to “wrap” the bag (which is malleable) tightly around the food. so the pressure exerted on the outside of the bag from water and the atmosphere is exactly countered by the meat, which cannot collapse. If the bag was replaced by a rigid steel container with excess space, I would say that water molecules would tend to want to evaporate and fill that space up. But for a vacuum bag with negligible space between the food and the container surface, it isn’t a factor at all.

The liquid (juice) you’re seeing from cooking meat is produced as the protein fibres contract when heated, causing liquid to be “squeezed” out of the network of proteins that make up the muscle. You probably lose more water to diffusion when salting the meat, as opposed to from any effects of the vacuum.

Vision, although we all use the word vacuum, it’s not correct as there is usually air in the food as well in its surface crevices.

I think there might be slightly more pressure in the sealed bag because it likely contains fewer air bubbles, but probably too little to make any significant difference. The food is under the same 1 Atmosphere of pressure as it cooks as long as it remains below the water’s surface. Air bubbles act as insulation from heat and pressure.

I found this old post when Googling water loss in vacuum packing.

I wanted to add to the info. My wife has recently completed a masters research study about the effects of packing atmosphere on sliced salmon.

It was noted that the vacuum bag packing had magnitudes greater moisture loss than air, CO2, or CO2 50% / N2 50% at atmospheric pressure in ridged sealed containers.

We struggled to understand why this is the case, because we thought the flexible bag should be exerting full atmospheric pressure on the contents, just like air does. However, we realised the pressure inside the bag must be lower than atmosphere, because the bag is wrapped tightly on the contents.

If the internal and external pressure were equal, the bag would only be loosely held against the product and you could move it easily, even though there may be no air inside. This is not the case.

As time passes, moisture in the food will be drawn out and absorbed gas will evaporate to fill the bag and allow it to return to a relaxed state. 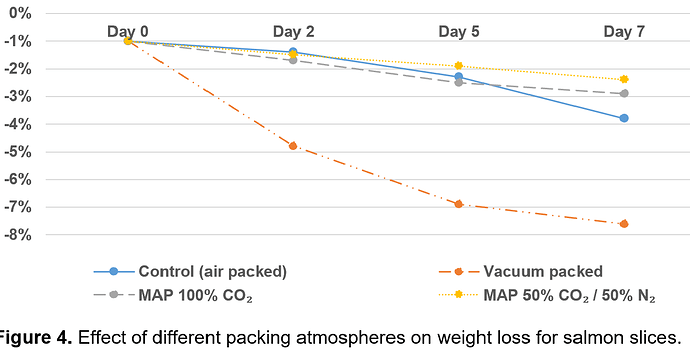 The thing is that thin slices of salmon are a little different to a big lump of fresh salmon. The surface to interior ratio is significantly greater in the slices, So the ability for the slices to distribute the pressure throughout the item is considerably less.There is no spring.

I certainly agree that a greater surface area will speed up any kind of spoilage.

If you vacuum bag a steak and cook it within hours, the moisture draw will be minimal. If you consider refrigerated (~4c) long term storage under vacuum bagging, the story is different, but there are also microbial considerations.

Just thought I’d share that vacuum bagging can indeed cause moisture draw, even though my own initial thought process suggested otherwise.

It is a little counter intuitive to be sure. But, I think surface area is a big part of the impact. If something is weeping or wicking moisture under compression it is doing so from the surface. Let’s face it, it’s the only place that moisture can be lost from.

Really not sure that the seepage data has much impact on anything when it comes to sous vide anyway. Cooking something you’re going to lose moisture. At least with sous vide you’re not wasting that moisture.

Yes as I said my data is about vacuum storage, not sous vide.

Actually my post above was somewhat rubbish (too many glasses of wine), so to save future confusion for anyone who reads it (and save myself embarrassment!) I’ve updated it to make more sense.