My biggest question is salt ? …or, soy sauce. Do these tend to suck out moisture ?

I typically use quite a bit of soy sauce, black pepper, and garlic powder, in my SV bag. And while I wouldn’t say my steaks are dry, they could be a bit juicier.

Now, yes, I do SV my Picanhas for 16 to 18 hrs, at 135f. But I’m going to tell you guys, if I were to have a choice of the tenderness that this cooking time and temp gives, OR a little juicier, I’ll just stick with what I’m doing.
I’m mostly just wondering if the salt is sucking some of the moisture out ? I could always say my steaks afterwards.

For longer cooks I do not add salt or soy sauce. I find that it results in juicer meat. For short cooks of tender steaks I do not see any difference or benefit.

And the thing is, pretty much all of my cooks these days, are longer ones.
About the only cut I can think of that might be hurt (or not be helped) with a longer cook, is a Filet Mignon, which are way too expensive anyway.
I’m getting my mid grade Picanha’s for $4.98 a lb, and 16 hrs is just right for my tastes

Will do my next ones with no salt, and just try salting, or soy sauce afterwards…

For a treat get a jar of this finishing salt to sprinkle over your meat when it is done and ready to serve. Keep your hand high so you get an even distribution not clumps of salt. 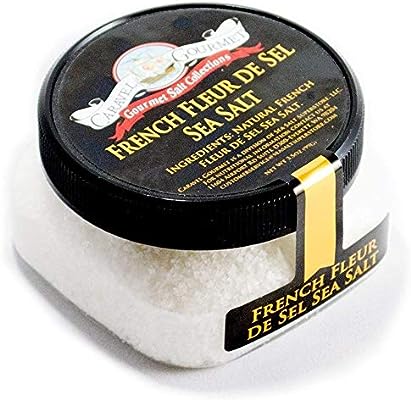 Can the bag itself influence the final result?

So far I made steaks from two different Picanha cuts (both were well marbled but one less than the other) and cooked them the same way (2 hours at 57C), however the first batch was cooked in a cast iron pan and the other one was torched.

The steaks cooked in the cast iron (1 minute per side) were perfect inside and tremendously juicy, basically they were the same if not more juicy than reverse seared steaks (in the oven finished in the pan), and the steaks which I finished with the torch were perfect too inside but the juice quantity was dramatically lower and I could feel that the meat was more dry but still very flavourful and tender.

The same happened with Chuck Roll steaks that I cooked 24 hours and then torched, they were tenderised but the juice wasn’t there, and I’m under the impression that it’s the same for the burgers and the chicken I made subsequently. It was in the bags!

Notice that the beef steaks weren’t salted, I cook them unseasoned and sprinkle salt flakes on the slices as I eat them, however chicken and other proteins are always seasoned.

My first thought was that MAYBE the steaks, that I didn’t make rest more than 2-3 minutes after the pan sear, released the juices in my plate because the muscle fibres were contracted but it doesn’t seem probable considered that they were stabilised in temperature from the sous vide bath.

Then I thought that maybe the food in my bags is not vacuum sealed in an ideal way, maybe my machine (which is something very basic) simply doesn’t suck all the air and the liquids in the bag can escape more easily. I don’t know.

Could the latter be a realistic explanation?

I picked up about 15 lbs of Choice Filet Mignon last week for $9.99/lb at Costco. Whole Tenderloins were $7.99. It seems “way too expensive” took a break!

Well that is a very good price, and in the old days, I’d have jumped on it. But now, with SV, I can make a tough cut of steak as tender as a Filet Mignon, and quite honestly for flavor, I like a little more marbling, that I can sometimes find in cheaper cuts, but never see in Filet Mignon.

Yeah, that’s a good point. There’s just something about the unique texture of a tenderloin, though.

I hear you… Plus that’s my GF’s favorite cut. Honestly, if I were to splurge on a few Filet Mignons, I’d probably just cook them on the BBQ and be careful not to over cook them.

Sorry to bump the discussion but I need al help with this issue.

My steaks suddenly are dry and a little though, no matter if I cook two identical steaks for 2 and 4 hours to see the difference, the bag is filled with a lot of juice and I don’t understand why because I always do the same procedure from sealing the meat in the bag to cooking at the same temperature.

I’m clueless to what is happening because cooking the a steak in reverse searing floods my dish with juices to the point that I need another clean one if I want to eat steak that’s not dripping.

If you’re not adding enough salt to dry cure the meat, only enough for seasoning, it won’t have any effect on the amount of purge. Your purge will just be a bit salty. I generally don’t salt beef when I SV, just afterwards. Better seasoning control mostly. And in general, the longer you SV meat, the more moisture that gets pushed out of the muscle. It’s just the nature of cooking proteins.

I barely rate as a rookie with this stuff but I can’t see the bags being the issue. I also don’t think it makes any difference if the air was removed by submersion or vacuum.

You mentioned 2 methods of searing, the iron skillet sears the whole side at one time, whereas the torch works on a concentrated area and you’ve got to keep it moving around.

Do you let the steaks rest before you sear them? I’ve read other post/comments where they take the bag out of the hot water and put it in a container of ice water. The purpose being, by cooling it down you get a little more time for the searing and reduce the chance of over cooking it during the sear.

Check out Sous Vide Everything on YouTube Guga is Amazing. https://www.youtube.com/channel/UCpFuaxD-0PKLolFR3gWhrMw

Sorry for the late replies but I did other tries.

Everything I cooked came out dry, from the pork ribs to the ribeye I just ate. Everything was tender but dry, it was extremely unpleasant.

The ribs were finished in a low temp oven, the same way I did last time when they came out juicy (same temp, same time, same animal), and the steaks (ribeye, picanha and Chuck steak cooked 24 hours) disappointed me. Salted and unsalted in the bag, tried everything.

This doesn’t make sense since last month everything I ate was super juicy, I can’t see how the torch would dry everything since it cooks only the exterior layer (I know Guga’s videos and be torches his steaks and they always come out juicy).

At this point, considered that the Anova holds the temperature steady, I only have to blame either the vacuum machine and/or the bags.

Tonight I wasted a good ribeye…

This is extremely odd. If the Anova is keeping the water in the correct temperature range then it is doing it’s job and there’s nothing to address there.
The only reason for “vacuum” is to remove air enough to prevent it insulating the contents of the bag from the water bath. In fact, just using a Ziplock bag and expelling the air from it works fine. So unless you see a lot of air still in the bag down around the meat you are cooking your problem isn’t with the vacuum packing.

I’m a little unclear about what you mean by “finished in a low temp oven”…?
When you take your food out of the bath it is fully cooked. The only thing it lacks is the “browning”…the sear. This browning - the maillard reaction - is all that is needed for finishing. And it is performed using high heat for a short amount of time.
If you are leaving your food in a low temperature oven (say at 150F or perhaps more) for any significant length of time then that could give you dried out food. Am I missing something?

Fingers crossed that you get an answer soon!

I used the oven to brown the bbq sauce which I covered my cooked ribs in after the bath, I followed a recipe from chefsteps and it worked very well but only the first time for some reason I can’t understand.

All the other times I use a cast iron to quickly sear (max 1 minute per side) the steaks or, during summer, I use the torch.

With the cast iron the steaks come out ultra juicy, I need to change the plate as I’m eating because otherwise it gets flooded, see: 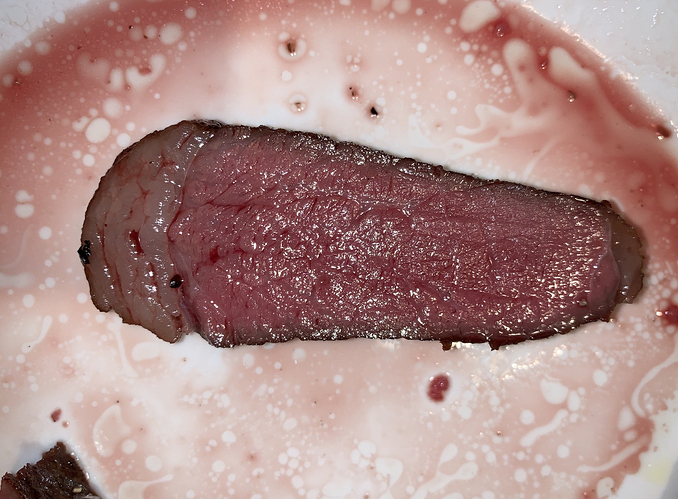 With the torch, that I used since I have the Anova, the steaks came out less moist but still very enjoyable however since the last month everything is dry but tender and this makes me quite angry because I can’t understand what’s wrong or what I’m doing wrong. 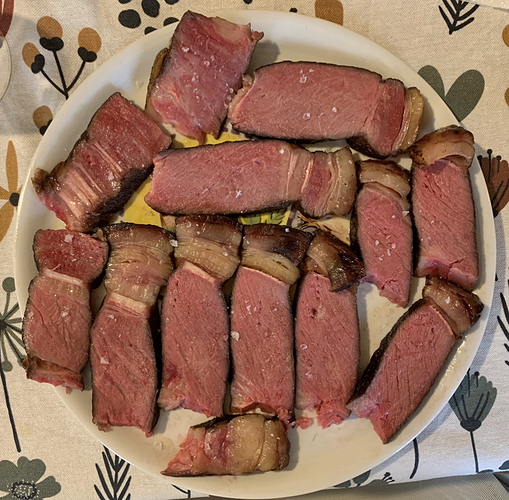 This steak here wasn’t dry like the one I‘ve eaten tonight but the plate under is clean and when I ate it I could feel it not moist as I expected.

Checking throughout the cook is an excellent idea. If that temp is maintained correctly then that’s not the problem!
Any chance that it’s the meat you’ve been getting recently? You could try cutting a piece in two and doing one half sous vide and cooking the other “standard”.

I can try two different cooking methods with the steaks I have cut from the same big piece, but it’s what I did with the pork ribs (2 slabs made in two different moments with different results).