Does the clamp holding the PC need to be out of the water? Or can it be in there? I think my biggest pot is too small…

I don’t think it would hurt anything for the precision cookers (the current design), but I would be concerned about the exhaust (lower) vents on the back getting splashed.

IIRC, the older Anova One had the power coming through the clamp, so that would probably be a bad idea to submerge.

Hey @MarkFugs, could post a picture so I can have a better idea? But from what I understand yes, it should be fine 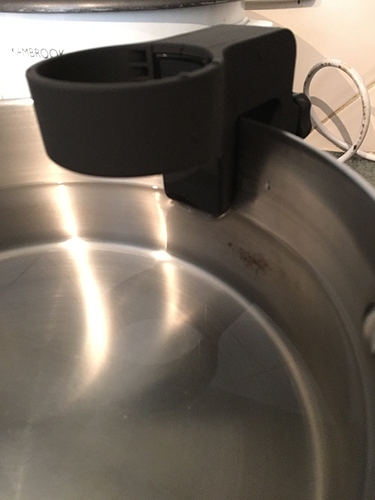 I was just worried if the material the clamp is made of couldn’t handle the water temp?

Thanks for the picture! I think it should be fine, it is made to handle some heat. Maybe to increase longevity don’t leave it in the hot water longer than you need too, and if anything happens we also replace clamps for free