Has anyone used these “domestic” vacuum sealers where you have reusable bags and a pump? Such as this: 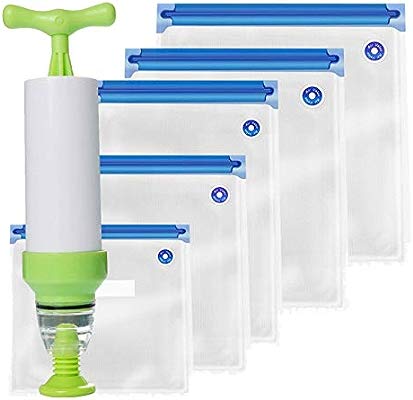 How do these compare with the more professional vacuum sealers? Also does anyone recommend these domestic ones that can withstand high temperatures?

It would be prudent to investigate the material used to make the bags. Silicon bags are generally considered the safest and sufficiently robust for multiple cleaning and reuse cycles.

Too much concern is made of the term “vacuum”. You just want to evacuate any pockets of air that would insulate your food from the heating water during SV cooking. Simple air displacement from submerging most of the bag is enough for most smooth and regularly shaped products. Vegetables benefit from the use of pumps.

I have been using those for the last 18 months or so and have reused them a few times without any problems. Just turn them inside out to wash them taking care to get right into the corners. It is a shame they do not make them with rounded corners to make it simpler.

I prefer my meat rare to medium at around 53C so other than one time when I did a steak for a cousin who wanted hers well done and I set it at 65C while I cooked hers and then dropped the temperature to do mine and my nieces, I have never had anything at a higher temperature in those bags but I think i saw that they were sold as being safe to 100C

I had exactly the same pump but the kit I got only came with the two largest sized bags and when it arrived it only had the single clip and not the two that it was supposed to have. I didn’t bother at the time but I will be annoyed if I lose it or it somehow breaks as it makes it so easy to seal the bags using it. I always run it right across from one end past the other then place it on that end and run it across again to the first end and then it works really well.

I have the same kit. I want to try using the hose and pump on my vacuum sealer in place of the pump. Just haven’t figured out how yet.

I’ve used these for years to cut down on the bane of SV: excessive plastic waste. Washing them properly can be a pain but they help. Seems like a entrepreneur would come up with an adjustable frame so you could put the bags (turned inside out in the dish washer). They will lose their ability to hold the vacuum after a few uses but they do work.

I’m using OutOfAir and I’m extremely happy with these bags. They seem sturdier than the name-brand ones I had and work like a charm. If what I’m sealing doesn’t fit in the pint-size, I grab the quart one. They even have notches below where they seal so you can tear them open rather than find a pair of scissors. Perfect for my GERYON vacuum sealer. It’s worth it to buy.

Never had luck on using these for a long period of time.