I have had my Annova Precision Bluetooth Immersion Cooker for approximately 6 months and am very happy with it, however being the scientifically minded person I am was thinking of the best cooking container in terms of heat retention.

I started off using a pressure cooker, which was large enough and can withstand the heat, and covered the opening with foil. This worked however the heat radiating from the vessel and my electricity monitor showed the Annova was having to power cycle to maintain the temperature, when most recipes are over 12hrs to a day, that’s kilowatt hrs of electricity.

I invested in a poly-carbonate Sousvide container with lid https://www.sousvidetools.com/sous-vide-containers/polyscience-22l-gastronorm-container, which worked however was still warm to the touch. My A level Physics tells me energy transfers to the lowest level, thus I was still heating my kitchen. Thus I have placed my sousvide container inside a larger sousvide container which is insulated with polystyrene blocks covered in reflective aluminium bacofoil. Now there is absolutely no heat loss to my kitchen with the external container cold to the touch and no power cycling from the Annova.

The cost of the bacofoil and polystyrene blocks are negligible, infact I could have gotten away with a cardboard box to contain the inner poly-carbonate container as the polystyrene is such a good insulator. 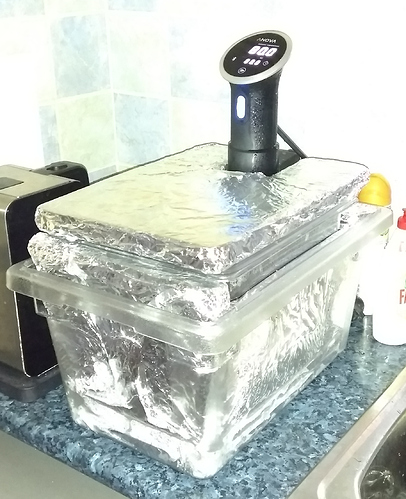 I use a Coleman 16 quart cooler. I used a hole saw, 2 3/8", and because the lid is hollow I shot some expanding insulation foam in to the lid through the hole I drilled out. Works like a charm now. Even has a handle now that helps transport around my kitchen. Because of the perfect fit into the cooler, I no longer get condensation buildup around the black neck and temperature wheel.

I don’t know if “bacofoil” is available in the US (it looks like this is a UK product); but anyone interested in insulating a polycarbonate container using something a little more substantial than Reynolds Wrap might check out a double reflective insulation called reflectix (ref: https://www.reflectixinc.com/products/double-reflective-insulation/ ). The YouTube video Anova Immersion Circulator Configurations for Sous Vide Cooking provides a pretty good overview for how to make a set-up similar to Watermad’s, starting from scratch. (This might be helpful for those of us who don’t live in the UK and can’t obtain a container with custom cut lid for as reasonable a price as his.)

@Watermad, I just put up a post on my energy efficient setup here:

@scooter7590, I too used a Coleman cooler for my setup and had a problem with condensate building up inside the lid because it’s hollow. I can hear water slushing about inside of the lid after my first cook so I drilled a drain hole and plugged it with a rubber plug. My questions to you are, what type of expanded foam did you use? Does it allow any moisture in or does it seal perfectly? Can you share some pics please?

It’s very simple. I lay a piece of 1-inch rigid foam insulation (the pink stuff) on the kitchen counter, place my covered 5 gal polycarbonate tub or large soup pot sous vide assembly on that, and wrap it all in bath towels, two layers thick. I even cut a pink foam cover, for the soup pot!

The foam protects the kitchen counter, and the towels hold the heat in, no extra stuff to buy and minimal evaporation.

Wort chillers will do the trick. Check this, for example, https://diligentchef.com/best-wort-chiller/

I think they were trying to find the best available option for a vessel you hold the water. Your wort chillers won’t do that.