I am new to sous vide cooking. 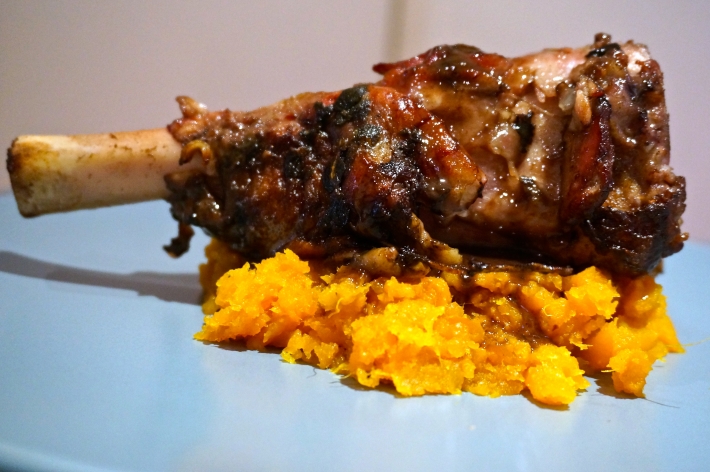 48-hour sous vide lamb shank with sweet potato mash and red wine and burnt butter deglaze reduction. Side salad of green apple, fennel, toasted walnuts and capers. For tougher cuts of meat like lamb shank, you can go all out at leave them in the...

I cooked two shanks, in separate bags. One was larger than the other.
The meat on the smaller one only just fell off the bone. The larger one was still quite tough.

My question is: how does one test meat for toughness during the cooking process? After all the meat is in sealed bags!

Thanks in advance
Newbie!

I’d caution that the larger of the two shanks may have actually been mutton, not lamb.

One of the butchers I know told me if a lamb shank is over a pound and a half, it’s mutton, not lamb. (but they’re often sold as lamb shanks).

Now, some of the recipes I have for lamb in the slow cooker - you’d likely never be able to tell the difference, as it’s cooked for so long, it all falls off of the bone regardless (also in part to the acidity of the sauce its being cooked in).

Mind you, a 48 hour cook should do that too. Did you purchase these frozen? Maybe the larger one had been in the freezer too long and was freezer burnt?

As far as how to test meat for texture when sealed in the bag, a pinch test is about the best way In the case of a cut that’s on the bone, a poke is probably better than a pinch. But the amount of ‘give’ in the muscle will help you tell when it’s been in long enough.

Visual reference should also be a guide. The recipe says after the time at the given temperature the meat will be ‘fall off the bone.’ While you may not be able to see this with the meat sealed in a packet, but there will be indicators, like the meat shrinking somewhat from the bone ends.

Other than that, as suggested it could be that the larger shank was mutton or hogget.

Maybe the larger one had been in the freezer too long and was freezer burnt?

Yes, this could have been the problem, although both were in the freezer for the same amount of time.

so freezer burn is a no-no with Sous vide?

It’s not a no-no, but, even though sous vide will make meats more tender, I wouldn’t expect sous vide to “undo” what the freezer has done - damaging the meat by over-drying it.
If you had a really good marinade that had an acidic component to it (typically a wine, vinegar or tomato base), that would allow additional flavours to get into the meat as well as tenderizing it more due to the acid. You could do that beforehand to that tougher piece, or try doing that in the sous vide bag at the time of your cook. You don’t want to overpower the flavour of the lamb, so I’d suggest the only flavours you may want to impart would be thyme, rosemary and/or garlic.

Sometimes larger ones are beef not lamb. If you had mutton you are lucky as more flavour and hard to get. I have found 24 hours at 75c is heaps of time