I was just talking about this with one of my teammates and I’m actually super curious.

Whats your weekly prep look like?
Mine’s usually focused around chicken breasts (boneless/skinless) with simple seasoning depending on my week’s menu. Salt, pepper, garlic powder is usually my go-to with a melange of cumin if I’m feeling adventurous.

I prep about 5 lbs of chicken/week, so when the prep is done on Sunday, I’ll simply come home during weekday with my cooker heating the water so I just go to the freezer, grab a couple of breasts and toss em into the bath. My weekends are usually focused around longer cooks (short ribs or flank steaks are regularly on my weekend menus).

So my question to you - what do you prep on a weekly basis with yer cooker?

Depends on the weather forecast for the week ahead. This week said hot! That means the less cooking I have to do the better. Fortunately there are only 2 of us to feed.

Chicken breats for salad x4 (1 chicken breast feeds the two of us in hot weather). I usually do them with herbs and flavoured oils. This week’s selection; thyme & garlic with thyme oil, garlic & lime with mulato chilli oil, rosemary & preseved lemon with garlic oil and garlic & preserved lemon with rosemary oil. They got cooked, chilled and thrown in the fridge for later.

Two steaks got bagged up for cooking sometime when we wanted a break from chicken.

Two batches of egg-bites for lunches for me and second breakfast for His Lordship. The onion jam ones are delish.

Anything that’s not used this week will be fine for the next one.

I am pretty much spur of the moment. Sometimes I will buy in bulk and freeze individual bags. I get tired of the same thing day after day.

I need to up my meal prep game. This is a weird question but what is the best tuperware (sp?) I want to invest in some legit tupperware but could use some advice. Glass? BPA free? Best for transportation and storage? LMK!

Yeah I can understand that. I’m a huge chicken guy since its lean and you can do a billion things with it (and now I dont suck at cooking it).

Seafood, any thing seafood. Doing octopus this weekend and going to marinade in Beetroot juice first then an 8 hour cook at 77 degree C. Will have to up a photo on Monday.

Glasslock. Its heavy but I love mine.

@Mark1Take a pile of photos of that octopus. I wanna see !

@4 hours in beetroot and kiwi fruit 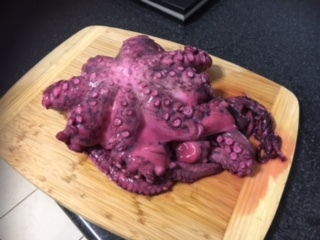 @jordan would be proud

YESSS!! Looks great @Mark1. What’d you think of the results?

We’ve got a similar octopus recipe using the beetroot marinade that one of our food nerds shared with us. We hear it’s super popular for impressing dinner guests

Octopus is often a chewy dish, but with sous vide, it's easy to enjoy a tender result hassle-free. It's an excellent dish and looks beautiful, which is why it's great for dinner parties and special occasions. I've been trying different flavors for...

Was fantastic, the beetroot was only for presentation but the kiwi fruit is a great tenderizer. The meat itself was a beautiful pure white colour and with a back drop of other delish seafood the whole cook was wonderful. I truly love this APC and what it can do to my food.

I have a question, you pre-cooked for all week’s chicken beast, when you need to eat, what will you do?!

Some are eaten cold or cool. No flavour in anything much just out of the fridge. Sliced and added to salad.

Others are rewarmed at a little less than cooking temp for about 30 mins then flash seared for some variety.

I have a question, you pre-cooked for all week’s chicken beast, when you need to eat, what will you do?!