Any way to save an Anova that got wet?

I was setting up my Anova to cook steak the other day, and the unit slipped and fell into the water bath. It was only submerged for like one second because I scooped it up ASAP. I put it in a bowl of rice for 24 hours hoping it would be fine. The next evening I tried to use it. It will power on, but it’s not exactly functional. It keeps beeping incessantly and telling me my water level is too low when it isn’t. I guess some kind of censor is screwed. I contacted Anova customer service to see if there are any repair options but they said no there aren’t and all they would offer me is a $25 off coupon to buy a new one, but the coupon can’t be used with any other offers. I am wondering if that’s my only option. Has anyone tinkered with taking apart the unit and replacing parts? Not sure if it’s worth it, but I really don’t know if I want to buy a new one. I love this appliance, but I’m quite appalled at how fragile it is. It seems like an appliance designed to be partially submerged in water would be able to withstand one second of being fully submerged. I feel like what happened to me could happen to anyone.

You don’t want to take any responsibility for your action and find fault with Anova. It’s often best to think before acting. Consider that much of the top side of the unit is hollow and would retain water so your 24-hour rice treatment was likely insufficient.

If the circuit board was still damp when you tried to use it only part might function as you discovered. Water being a great conductor you might have short circuited some still-damp circuits like the water level sensor’s.

Contemporary integrated circuit controls are rarely amenable to partial replacement fixes. Cheap to make and impossible to repair, welcome to the 21st Century.

Your Anova corporate support team might have better ideas, but I’d completely repack with rice or even better, silica gel. Place Anova in a sealed bag with your desiccant of choice for a week. Then try.

For its price i certainly wouldn’t expect my Anova to be sealed like a Rolex.

You don’t want to take any responsibility for your action and find fault with Anova.

Where is she blaming Anova and taking no responsibility?

It’s okay. I’m not going to worry about any Internet snarkiness. It was an accident, and that kind of thing can happen to anyone. I still stand by my opinion that an appliance designed to circulate and heat water would ideally be not so susceptible to water damage, but that’s just my opinion. I’m not here to argue with someone about the intricacies of product design.

I mainly just want to know if anyone has taken apart and tinkered with the appliance and have replaced any parts successfully.

I think the FAQ on the support page recommends burying it in white rice for 24 hours.

Use a hair dryer and heat up the unit and evaporate any water remaining inside. Good luck!!

I’m with Elaine: a device that is designed to heat water from above the water surface should have the essential electronics sealed.

I have never submerged my Anova. I have, however, apparently made a sous vide bath that is too efficient.

I got tired of getting up in the middle of the night to check water levels, so I designed a basin that would retain heat and steam.

Unfortunately, since there isn’t an easy way to mount the Anova without putting a hole in the lid of the container, whatever steam escapes, escapes around the unit.

When the first unit failed - electronics went bonkers on all fronts - I was ready to admit that perhaps it wasn’t just the steam, but maybe I had jostled the unit too much, or had an accident that I didn’t recall, or it was a faulty unit.

Kudos to Anova for replacing it free of charge after I sent a video of what was happening.

Now, however, even though I have been EXTREMELY careful with the new unit, keeping it clean and dry and in its original packing when not in use, and NEVER submerging the top, it has begun to do the same thing.

I am now forced to consider that the unit is not sealed enough to be bathed in steam, and wonder why this was not considered as part of the design? Surely there would be a cost-effective way of doing this, or the price adjusted accordingly? It just seems like shoddy engineering, or someone trying to slip one past the consumer…

I won’t be replacing this unit with another Anova.

Actually there’s an easy way to avoid cutting a hole in the lid - simply use something else!

I did this myself as I wanted to retain the option of using my Coleman cooler AS a cooler. I cut reflective insulating bubble wrap to fit and then inserted the Anova through the insulation. I’ve been extremely happy with the results. It has resolved all my water and heat loss issues completely. I highly recommend giving it a try! 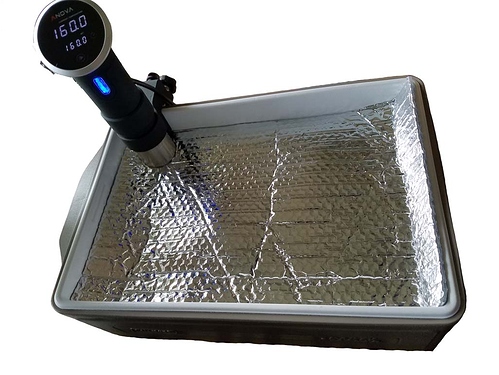 Problem is that my unit is now malfunctioning because of the exposure to moisture.

I’m going to give it a couple of days to dry out and try again.

Dr. Jon, since you are experiencing repeated challenges with your new circulator you might want to consider employing some potentially preventive steps.

Circulators can generate a substantial amount of water vapour when operating at elevated cooking temperatures which i suspect you may be from references to water loss and steam. Commercial circulators costing five times typical domestic models operate reliably 24/7 for years. Thus it is likely Anova has cut a few engineering corners to meet a retail price point.

You might want to consider preventing the upper part of your Anova from being bathed in steam. I float a generous layer of ping-pong balls in my cooking vessel that evenly disperses escaping water vapour. In 24 hour cooks i seldom find it necessary to add water at any time and if i do it’s only a few cups.

Some Community members have successfully used silica gel to dry a wet circulator when placed in a sealed air tight container with the gel. Others report success by wrapping a towel beneath the top to intercept heat and moisture. The high heat of a hair dryer may permanently damage solid state electronics.