I thought I would share with you the new setup that I have for my APC which is now setup with the Coleman 28 quarts / 26.5L cooler. The cooler’s cover has two slots for placing cans (I guess). I drilled a 6cm hole through one of them and slotted the APC in.

The most notable difference between this and my last setup (regular plastic tub with cover) is the drop in power consumption once the water reaches the desired temp. In my last setup the APC would draw between 200 to 400, maybe even 500 watts. Now the consumption is more than halved.

Check out this short video:

Oh, I am not sure if this cooler can withstand the heat without deforming over time… So I’ll be reporting back with my findings on that.

UPDATE: I’ve had ribs cooking in it for 18hours @ 78C and the cooler is doing a great job! I purposely went for a relatively high temp cook to kind of push its limits. The lid gets slightly warm (I measured its temp with an infrared thremometer @ 48C), but the body (everything you see in red) is just above room temp @ 29/30C. Room temp / other surfaces around it measured at 24/25C. I believe the reason the lid gets warm is due to the fact that the lid is hollow from the inside (there’s no foam or anything, just air), so some heat/steam from the bath is escaping into that space. Not a big deal considering it is still 30C below the water temp! I might need to drill a small hole with a rubber plug in the side of the lid to drain any accumulated condensate water after the cook is done. Will see.

My verdict so far is this is a great setup and I would recommend it to anyone looking at saving a lot of electricity on long cooks. The other advantage is that it doesn’t transfer any heat to whatever it’s sitting on top, so you have no risk of damaging your kitchen surface. The only downside I have so far is that you can’t see the food, not that that would make any difference to the cook… but I always like to look at the food and keep an eye for any potential bag leaks etc. Two ways around that I thought: 1) cut out a section of the lid and replace it with clear / plastic to make a viewing port (I would have to do two layers of that to keep the lid insulated; tricky job) or 2) drill a small hole and use one of those cheapo USB endoscope cameras off AliExpress. I kinda like the second one cos that would give me the possibility to watch what’s happening remotely

Nice, thanks for sharing. I think cutting out a section of the lid through is a pretty good idea. I like the endoscope camera idea even more, since you can see what’s going on remotely.

zqushair - Love your ideas, unfortunately, I suspect that condensation under the cover would most likely keep you from seeing clearly through a “viewing port/window”. Sort of similar to a steamed shower door or bathroom mirror following a hot shower. My guess is that the lens of an endoscope camera would be blurred by condensation as well, although you could wash it off by dipping the lens into the hot cooking water regularly. In such a case, the lens would need to be sealed and waterproof, leading to a higher cost, even on AliExpress. Perhaps spraying the lens with a condensation neutralizer (used for car windows) would do the trick (?) However, I’m not sure it would be efficient on a “viewing port/window”. Just my 2¢ bit.

Thanks for the input @ANDRE1D. The usb endoscope that I got claims to be waterproof… but I’m doubtful as it was under usd10 iirc. Dipping it in “hot” water probably won’t help even if it was waterproof under normal conditions. The other issue with endoscopes in general is that their focus is setup for close objects and the problem with the cheapo ones is the light they emit is nowhere near powerful enough to light up far objects.

You’re also right about condensation on the viewing port. You know I think I’m gonna just leave the setup as it is. I can always inspect the food by opening the lid once in a while. It’s not like you’d wanna sit for hours watching the food cook anyway! Although admittedly I did do that the first couple of cooks hahahaha

Generally speaking I’m really happy with it so I would still highly recommend it to anyone looking to run an energy efficient setup.

I might run a comparison with my old setup to see how much energy this saves over 24 hours. I’ll post my findings here if I do it.

Love the idea. Was just thinking about doing some baby back ribs and was wondering what to use for a container short of separating the slabs into manageable sizes for my existing containers.

I’ll have to try this.

I have just ordered my anova, and the 28 quart cooler as per your pics, i have decided i will keep the lid as it is and use an old chopping board (plastic / nylon, its about half an inch thick and is a good thermal insulator, that way the cooler can have a duel purpose.

Cooler box is def the way to go,

I love the set-up. only problem I found is its rather expensive if you dont have the hole saw. I paid 17.00 for one of the cheaper ones (2 3/8") at a box store. As I already had a SET of other hole saws, I didnt get the mandrel (part that has the bit and attaches to the hole saw.) Had to buy one that fit the saw as my mandrel was different. BOOM! another 15 bucks! for one cut! LOL. I would suggest checking out any friends that are tool buffs and getting them a 6 - pack of decent beer to just use theirs.

I went with the Coleman 25-Quart Party Stacker Cooler as many others also have, and like mickyp I also wanted to retain the lid to allow it to serve dual purpose. I am using a piece of InfraStop Double Bubble Reflective Foil Insulation cut to fit the Coleman. I cut a hole in the bubble insulation through which I fit the Anova and let the bubble insulation float atop the water!
It seems to work extremely well. After a cook at 150 degrees F when I turned off the Anova the temperature of the water dropped about 3.5 degrees per hour in a room with an ambient temp of around 60 degrees F.
It’s easy to lift the bubble insulation up to place food in and take food out.

You said you did ribs? I am curious about what are the inside dimensions? Spare ribs are usually 18 to 19.5 inches long. Would they fit in this cooler?

Hey Wiley!
I have the 48 can coleman. They both have the exact same dimensions length and width. 17.5 inches by 12 inches. Depth is only difference. I did 3 full racks of st louis style spareribs no problem. I use the variera pot lid holder (available on amazon, product of Ikea i believe) its expandable stainless steel and if you use it upside down over the ribs they wont swim away. ribs easily fit if you bow them slightly.

The Variera pot lid holder is definitely from Ikea - and if you have an Ikea near where you live you can get it for around half the price it is sold on Amazon. ( I bought a couple for US $6.99 each a little over a month ago)

Sorry for the long delay. It was cooking beef ribs. I normally cut the rack (5 bones wide) into a 3 and a 2, but that’s only because I can’t easily get it inside the plastic bag as one full piece. I have also done pork ribs and didn’t find the size to be an issue.

How long did it take to get up to 175 degrees? I just did a mod on this same cooler. However, I noticed my lid is insulated when I cut out the hole. It’s at 130 degrees and the lid is not warm. Pushing it to 175 to see how it does. 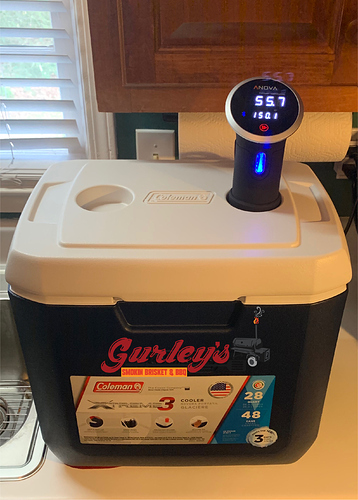 As I always cheat by adding boiling water from an electric kettle to my bath to get it up to very high temps I’ve no idea how long using the APC alone to get to 175F would take!