Hi community, I would like to share a my experience with using an old food/drink cooler I found in my garage: 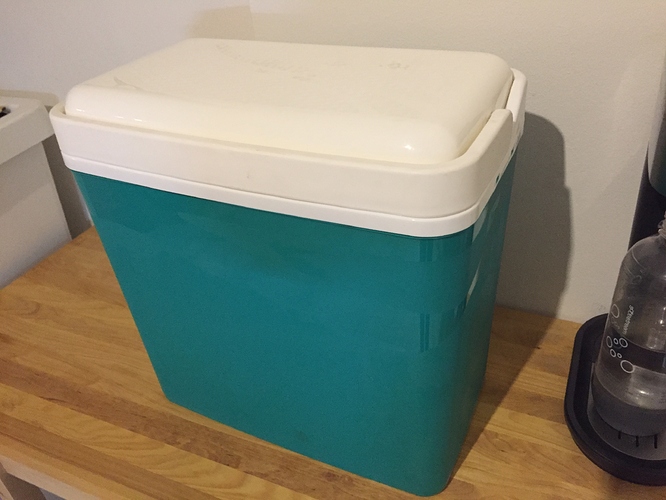 I was not afraid to destroy it in case the test failed, as nobody used it for ages. I was about to cook for 24 hours at 85°C. I was not sure that the plastic would not deform when exposed to such temperature
for that long. On the other hand, I also wanted to save some energy and reduce evaporation.
The cooler’s body actually consists of two containers of different sizes with the gap filled by polystyrene foam.

First I had to test the water levels: 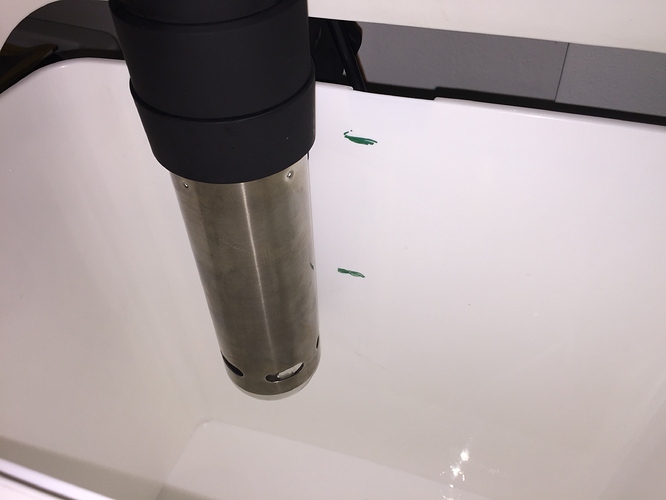 As you can see, the container is pretty deep and the min/max levels were acceptable even when I used the clamp. I did want to use the lid though and I used a hole saw of a diameter of cooker for a good fit. Make sure that the hole is tight, so the cooker does not fall through. It is an electrical device, so make sure you test the fit when unplugged. 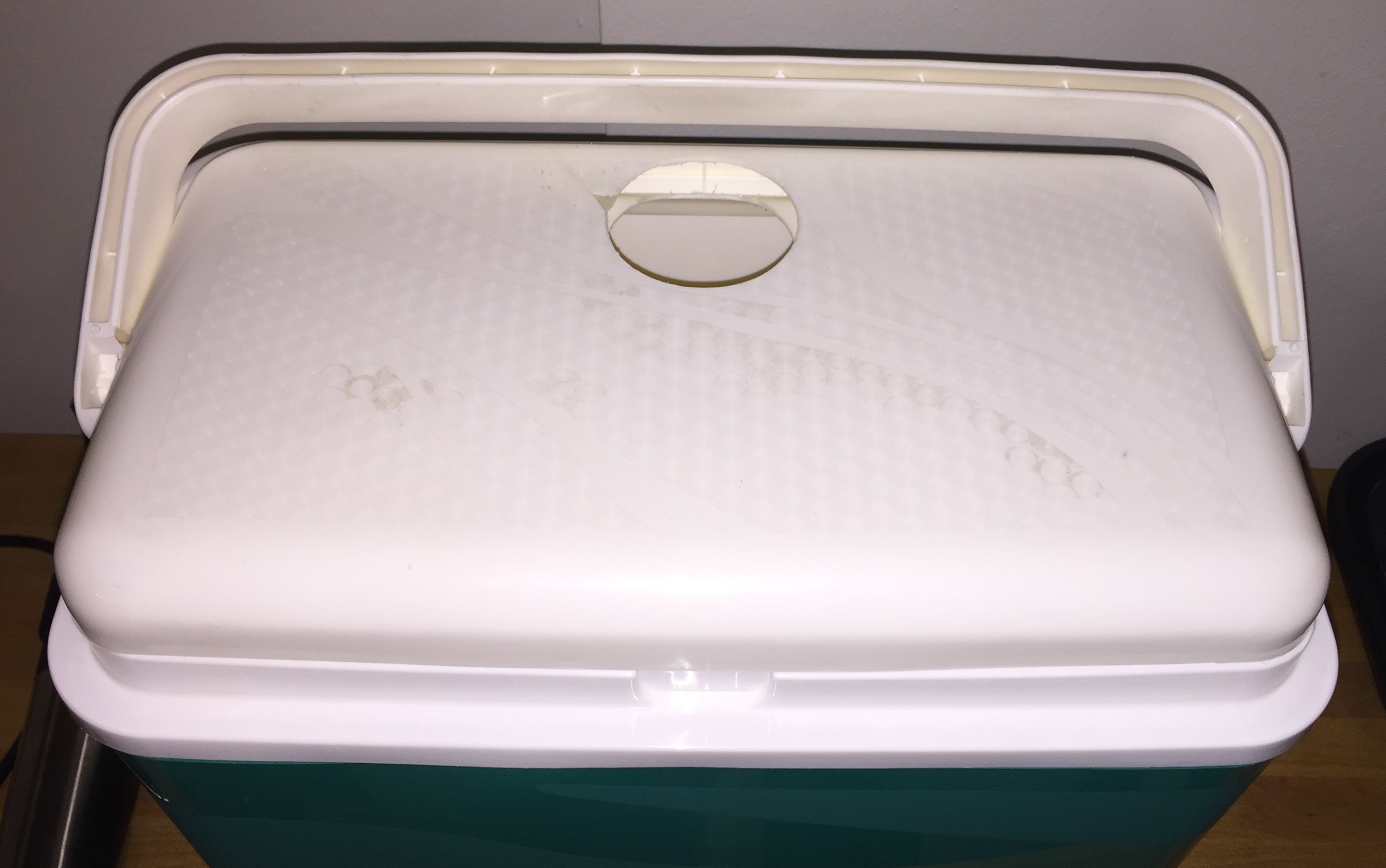 Here comes a catch: the lid also consists of two pieces of plastic, but unlike the container part, the space between the two parts is not filled with any material. That actually caused that the first layer I drilled/cut through cracked and later, wen cooking, the space around the hole got a bit deformed, as if collapsing, as there is literally nothing stiffening the lid’s layers around the hole: 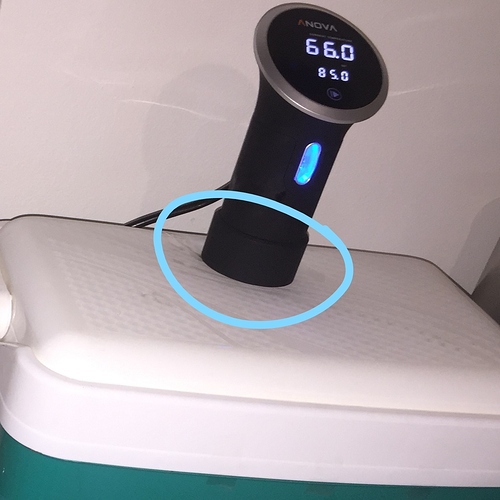 The image also depicts the solution in operation. So whatever cooler you would use, make sure the lid is not hollow.
This is what the container looked like after being exposed to 85°C for 24 hrs: 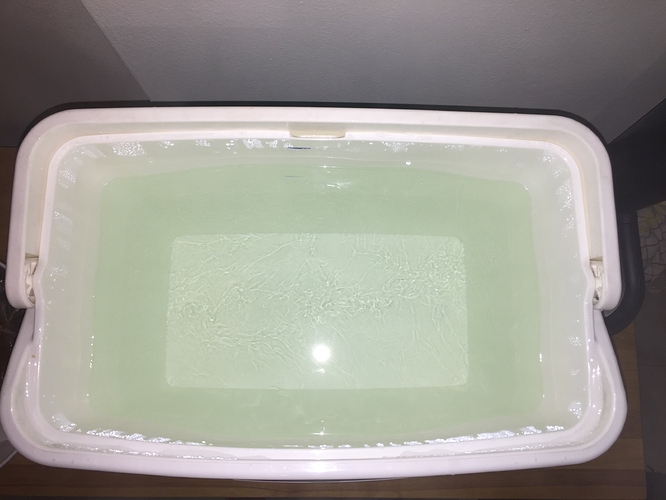 Resume: I cannot judge or estimate the energy I saved over those 24 hrs. But once I turned the cooker off, it took about 6 hours to the water to lose half of its temperature. I will add some extra insulation/stiffening to the lid. I will use any suitable mounting foam in a spray to do it. It does not have to be food safe, as it does not get in contact with the food. I use vacuumed bags.
the container holds up to 21 liters of water, which makes it great when preparing larger or multiple pieces of food. I also appreciated that I can put the cooler (now a cooker) to a place where it did not interfere with other works in the kitchen.
the only downside is you do not see the food and, the more important is that before opening it, the cooker must be switched off and removed. The water temperature does not change that dramatically within a minute before you drop your bags inside. No stress (that’s what i love about sous-vide).

Hope this helps or serves anybody for inspiration or guidance. If you have any questions I did not cover, I will be happy to answer.

To estimate the energy saved, may I suggest…

Use your setup as if actually cooking and bring it to any target temperature you want. Time how long it takes to heat the last 10°F. Lower the target temperature by 10°F. Time how long it takes for the temperature to drop 10°F. Repeat using a non-insulated pot, approximately the same size/amount of water. Since your cooler has a cover, you might do this twice, once uncovered and once covered (at least with plastic wrap, to prevent water evaporation/loss).

If time to drop 10° is twice as long as time to heat, you are only using about half the available energy to maintain the temperature. Comparing insulated/covered to uninsulated/uncovered at various temperatures, should give you a good idea of what’s happening. All things being equal, maintaining higher temperatures (compared to ambient) should require more energy. Uncovered, I would think, will probably use the most energy, due to evaporation, regardless of insulation.

Regardless, there are other non-quantitative considerations. 165°F water is ‘ouch’ HOT. The outside of my cooler isn’t (as long as the cooler doesn’t leak or fall apart).

My setup is a 24 quart (22 liter) cooler with one corner hacked off. It works great, but needs quite a bit of water. “Minimum” means minimum as far as the cooker goes so I tend to fill it more than I might need. As the water level gets to minimum it starts to make rude noises. 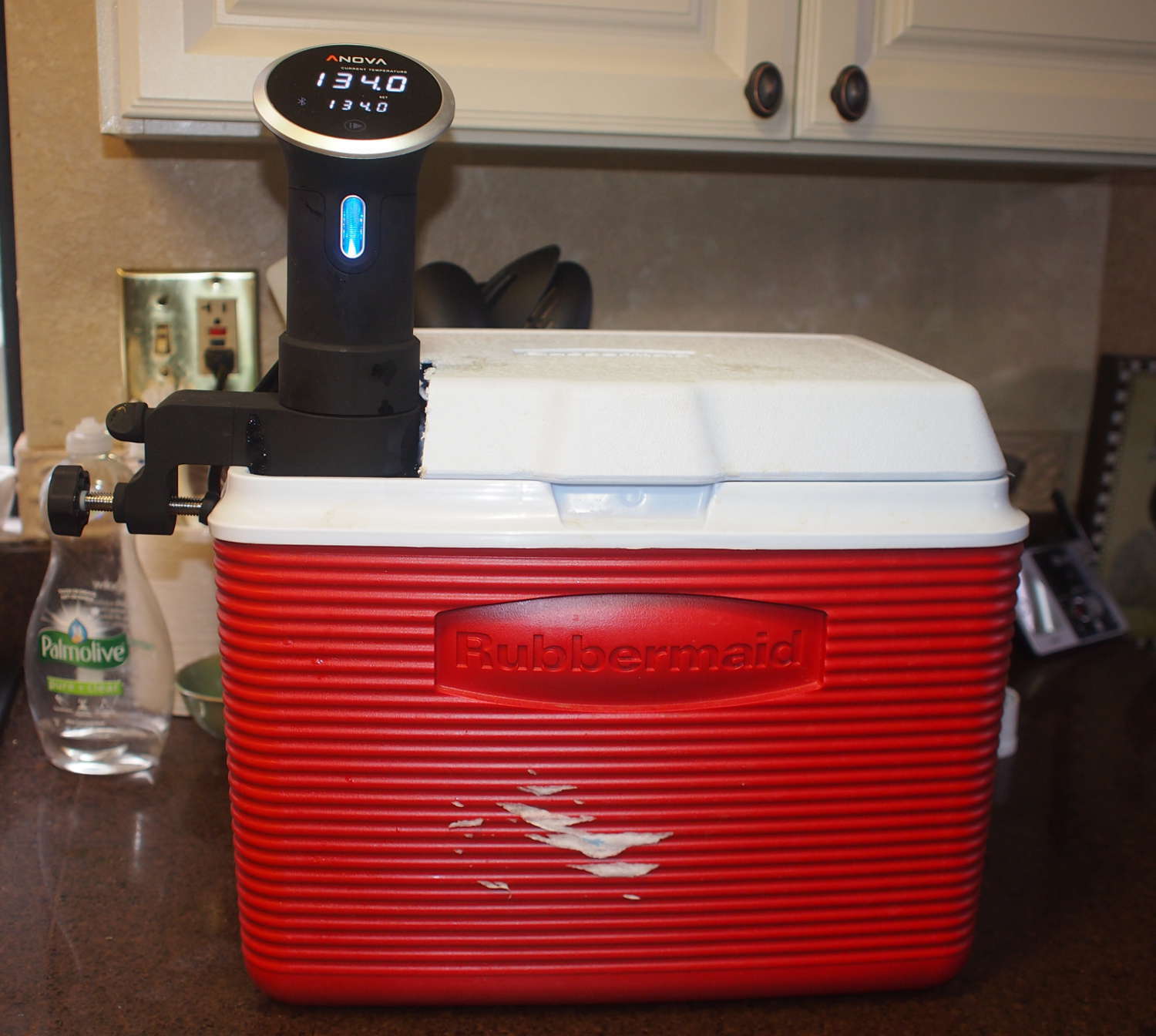 As long as you are using water that was heated externally (ie: on your stove in a pot) then the larger volume of water isn’t a big deal. I’ve done over 20 lbs of tri-tip in a 48 qt cooler before, my starting water temp was about 180, knowing that as soon as the meat went in it would plummet the temp. I actually ended up taking water out and putting more 180F hot water back in once the meat went in because it dropped about 10 below where I wanted it.

Best not to run the Anova at minimum water level, they tend to fail when you do that.

Lastly, recommend you rotate your Anova 90 degrees anti-clockwise, keep the vent over the bracket, some people have blown theirs up sucking steam in when they have it turned like yours.

Thanks, I have learned the hard way about steam coming up and getting in the opening for the temperature dial. I turn it but found that isn’t enough, so I close the opening with a towel.

I fill the cooler with hot water from the tap which is 120F in my house.

Yeah, I use a piece of mylar insulation that fits around the cooker when I use that cooler, which isn’t that often. This was at work, and because we use it for cleaning and sanitation of processing equipment, getting insanely hot water is never a problem.

I’ve never had an issue with the dial, but thanks for the heads up. I don’t use the app, so losing the dial would suck.

Its funny, I almost bought the EXAKT same cooler today, but I didnt know if it was to deep so I decided to do a research first and I found this post!

My question, are you still satisfied with it, does it work well. Does the cooler it self get deformed? Should I buy the cooler?

Generally speaking, you probably won’t be running cooks where the water could get hot enough to deform a cooler.

Cheap plastic you know, anything can happend…

I have one I bought for about $20 that has been great. I suspect that the $3 foam coolers would not hold up. Mine is a 24 quart Rubbermaid. 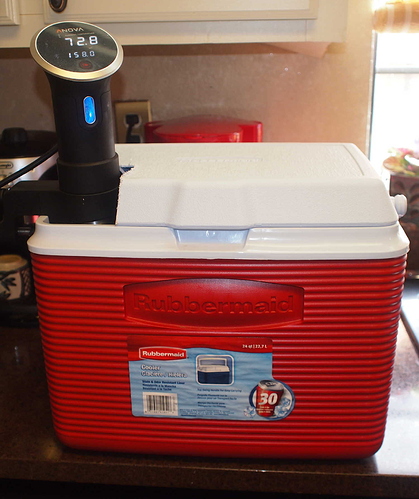 How do I upload pictures from an iPad?

I used a Curver, 10 litre, small cooler. Perfectly fits 3 pieces of ribs, cut in half, totally 6 bags, standing on high edge. I also used a small disc of frigolite to come up a centimeter and to stabilize my Anova. Works great! 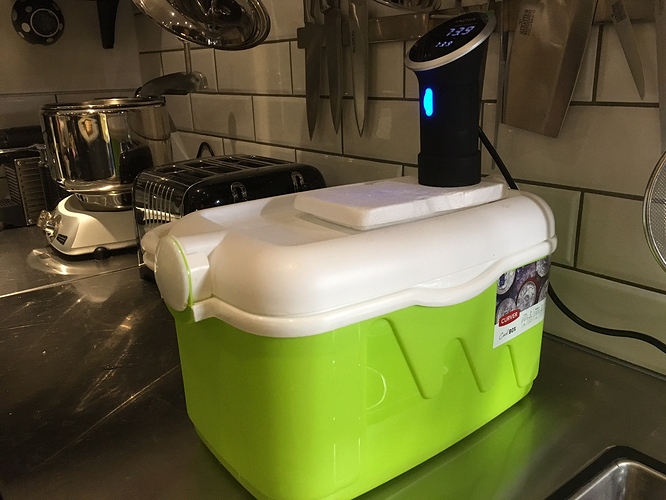 Very cool set up! Also, maybe off topic: but I really love the tiled wall you have in your kitchen! @Stefan_ha