I just received my Coleman 24 can cooler. This seems to be the cool that everybody recommends but I have a question, the cooler seems awful shallow to use with the sous vide cooker has anybody had any issues with using the 24 can version verses that much deeper 48 can cooler?

There is another thread about the Coleman 24 can cooler here.

No issues whatsoever! The plastic base of the Anova sits right on the bottom of the cooler (touching) and works perfectly. I just clamp it on the side of the cooler, as I decided to not cut a hole in the cooler top (so that I could use it AS a cooler as well as a cook container). Read through some of the other posts on the forum and you’ll find a lot of happy people using the Coleman 24 can!

Another comment people were making is that the top is the same for both (24/48) - so you could pick up both, cut a hole in one and keep the other for when you wanted to use them as a cooler instead.

I let the APC rest on the bottom of my Colman 24 can FrankenCooler and then, when I’m doing large stuff (whole pork loin cut into 2 pieces and vac-packed) I use the small racks that came with toaster oven sized broiler pans. They keep the food bags about a half inch off the bottom allowing full circulation around the food.

Note: the 2-3/8" hole in the lid won’t let the APC slide down very far when using the 48 can FrankenCooler, so you have to make sure that you have enough water in the cooler so that you still cover the APC’s minimum adequately.

I marked a sharpie line on the inside back of cooler for min water level so I can see it with a quick glance.

The sharpie line is an excellent idea. Going to be marking a line in mine once dinner is done!

I marked a sharpie line on the inside back of cooler for min water level so I can see it with a quick glance.

Does the line stay put after having been in hot water for many hours?

Only have done one 18hr cook and it hasnt faded at all.

Only have done one 18hr cook and it hasnt faded at all.

Amazing. Those Sharpies are better than I thought!

Anyone have experience with converting the coolers and the higher temps together with “high density poly ethylene” or HDPE?

Any issues with buckling or melting?

Reading up on HDPE it says 60C max temp or 80C for a short period of time.

Most eskys or coolers are lined with HDPE - so has your frankencooler melted with the water temps over long cooks?

One thing that is good to do is to seal between the 2 layers of the lid after you drill the hole to prevent from collecting condensation in the lid. I used some epoxy putty, the stick you mix in your hand, to fill mine. I saw someone else’s recommendation to use some expanding foam like Great Stuff, that would have been easer to apply, but a longer wait time to dry. 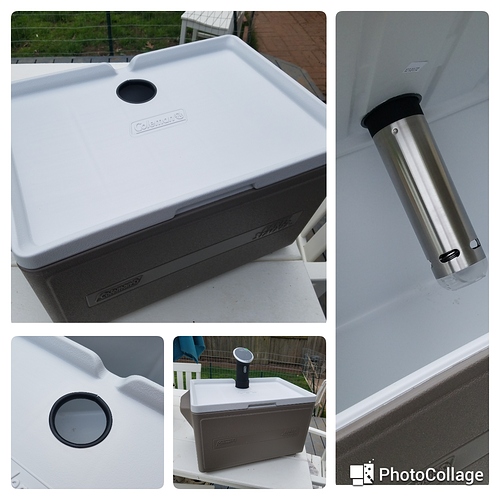 I used a silicone to seal the two layers after cutting (the gap is much narrower than I expected (about a 1/8")). To finish it, I inlayed a piece of plastic tubing. The tubing is actually for landscape drip systems, used a razor blade to cut it lengthwise, then expanded it into place.