@"Stephen Svajian"‌ I’ve noticed quite a bit of corrosion on my unit (see pic link below) which I haven’t been able to remove with a scourer or vinegar, and I’ve also measured a 5V difference between this particular probe and the rest of the metal on the body, so the corrosion is possibly caused by leakage current. Will this be a problem with the production 220v units as well?

Posting to keep up with notifications.

can anyone else who’s received a 220v unit (either developer or production) check and see if they have this issue as well? It should be fairly noticeable after 200 or so hours of operation.

I have a 120v unit and had the same thing after my first use. I just received the unit yesterday and boiled some eggs to test it. After opening the unit this morning, there was a some rust dust in that same exact spot on mine. It was a very small spot of faint dust, but enough that I immediately noticed it.

I see some rust on the same spot on my prototype as well.

Are you all sure it is rust and not just discoloration of the metal because of heat.

From the photo, it looks like corrosion. Not sure what process would discolour metal at such relatively low temperatures?

I am pretty certain that it is rust on my 220v prototype.

It’s most certainly rust in my case. It even wiped off as it’s a brand new unit and has not had much use for it to become a stain yet.

Try some Barkeeper’s Friend: http://www.barkeepersfriend.com. If anyone else notices this issue with a production unit, please let us know.

@"Stephen Svajian"‌ - it’s not just surface discoloration, it’s actually starting to eat away at the stainless steel probe. I doubt barkeepers friend is going to fix that. The probe I’m talking about is the one that senses the water level, since it lines up to just below the “min” level on the skirt.

Please don’t ignore this feedback or fob me off with “use vinegar”. You guys need to get onto this or it’s going to be a major headache once production units start failing. I’m trying not to sound like a whinger, I just want to make sure the product has longevity once it’s in the hands of users. What’s the point of having hacker special units with early release if you don’t listen to our feedback?

@aarthur‌ I’m not ignoring this at all. Your feedback is super-important. I’ve put this in front of the team and we’re trying to figure out how this could have happened. Please stay tuned.

This can be cleaned by using a regular dish sponge. You need to use the rough side of the sponge with water only (no vinegar or cleaning agents). If this does not work please email support@anovaculinary.com for return instructions. Thanks!

@levig‌, who are you? An official Anova support person?

@aarthur Yes, @levig is a member of the Anova Team.

@aarthur Yes, @levig is a member of the Anova Team.

Just a suggestion… it might be a good idea if all official Anova reps had some sort of indication that they are an Anova employee when posting in the forums. A signature line, or a special avatar maybe?

Just a suggestion... it might be a good idea if all official Anova reps had some sort of indication that they are an Anova employee when posting in the forums. A signature line, or a special avatar maybe?

I’ll second that suggestion. There was a comment on another thread about a timeline for the iOS, Android, and Windows Phone apps this morning from someone that is presumably from Anova but they had just registered a minute before making the comment. There is no way to tell that they are from Anova other than the fact that only someone from Anova can know the app development timeline.

Mine is rusting, and pretty bad. Like large clumps of rust. I’ve been fairly careful in cleaning it and letting it dry completely but I guess I wasn’t paying close enough attention.

For a unit designed to spend most it’s running life with its ass in the water, the rust is pretty dang surprising. Is that particular rod replaceable? Or is my unit doomed?

@clarklab‌ any photos? I think you just have to return it for a new one and hope it’s not a ruster.

I have had the same issue on my 110V units. Pictures below. This definitely looks like some galvanic corrosion is taking place. 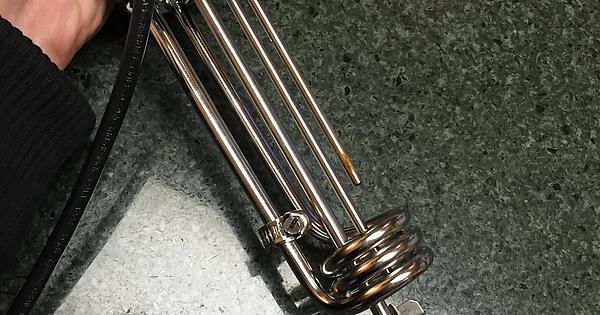