We do a lot of frozen chicken breast. I defrost them in water for a couple fo hours but am wondering if I can defrost them sous vide as part of the cooking process. If yes, how to do, time and temp?

From what I’ve seen on a few sites, just add 30 minutes to your cook time and drop them in frozen. I did this last weekend and had a couple breasts in there for a total of I think 2.5 hours and they came out great.

I have done a fair amount of on line searching as well and there is nothing definitive. it does seem that frozen carries more water which ends up steaming/boiling the chicken. i’ll keep looking and experiementing

Mine came out fine, though I just used the water displacement method with ziploc, I didn’t vacuum pack them.

Is it all right, to start the frozen meat product in the cold water and let the heater bring everything up to cooking temperature together? I would then set the timer, when the water came up to the target temperature.

I tried this, last night, with a partially thawed portion of cod fish, starting it in 65F tap water, setting the timer, when the water came up to 130F, and then cooking it for 45 minutes, and it tasted great.

Would this technique work, for a larger cut, like a roast or a brisket?

You can use PedroG’s elegant Thickness Ruler to estimate the time needed to heat frozen meat. 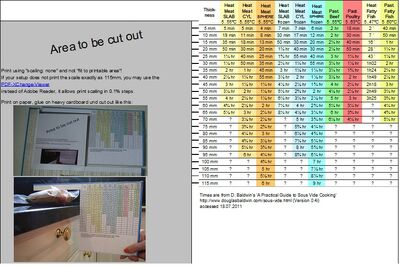 Baldwin’s tables (among other goodies) are coming to the next release of Anova Remote due in couple of weeks. Here is a preview: 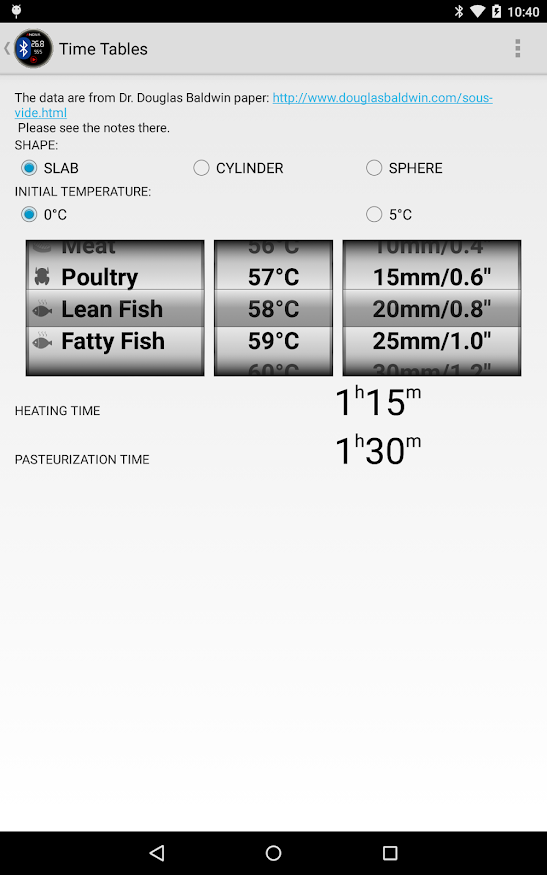 Looks great! Will you include heat from frozen too? When will the iOS version be available?

@leonard It does include heat from frozen. That’s the “intial temperature” radio buttons: from 0C - is from frozen, 5C refrigerated. Don’t worry: there is, of course, C/F switch for metrically-impaired

@vtemkin “Frozen” would be a better term than “0C”. 0C can also mean almost, but not, frozen.

@leonard Thank you, good call. Will do.

. . . and they wasted their time developing for Android?

I’m all always Sous viding frozen steaks and chicken and they come out great (I just add half of the total cooking time when they’re frozen)it seems like an ideal way to defrost items much better than the microwave. I’m just wondering what other people think of the frosting with Sous Vide versus the microwave.