Tested the anova today poaching an emulsified sausage. Here are the settings: 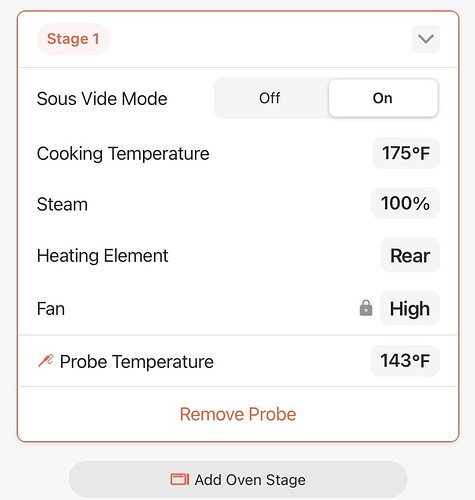 After a suspiciously long cook time I temped it with an instant thermometer. 163F!
Alarm never went and probe temperature was way off. Did I do something wrong with the oven? Is there a fix for this?

Hi Matt, you can test your probe’s accuracy with the oven operating by clamping it so its tip rests in a pan of boiling water.

Some ovens have a recalibration setting so you can reset them while performing that test. I’m not so fortunate as to own an APO, thus i’m uncertain of some of its less obvious features.

No matter what you do, also contact Support above and get the Anova Support team on your case.

I have had a couple of occasions where the timer chime did not go off when the probe reached its temperature, but usually it works. However, the oven is not designed to hold the food at the probe temp when the oven temperature itself is set higher, which seems to be the situation in your case. (Oven temp at 175F and probe at 143F.) I don’t usually rely on the timer for notifying me of the probe reaching temp because even when it dings (which it does most of the time) it only dings once and it’s easy to miss. So I try to make sure I’m watching closely, either on the oven or, more conveniently on my phone using the app, and then I’m ready to pull the food as soon as the probe reaches its temperature. It’s possible the probe or the timer on your oven are not working correctly and you should contact support, but I’m not sure from your message if your probe was still reading 143F when you checked with an instant read and got 163F. If so, then it would certainly seem the probe is off. But it might be worth another try. Your screen shot only shows the temperature you set for the probe, it’s not displaying the probe reading, which shows on the oven handle and at the top of the app.

I disagree with you. While the majority of users will use this oven for equilibrium sous vide cooking (chicken done at 165F so oven is set at 165F)
Sous vide is most efficient at a higher ambient temperature than the final desired temperature, hence the probe. My intent wasn’t to hold the food at the set probe temperature. Having a higher sous vide temperature significantly decreases cook time. Scott himself recently spoke about this specifically with Dave Arnold on Cooking Issues.

Hi Again Matt: Based on the additional details in your new message (that the probe only went up to 113F) it does sound as if it’s a faulty probe. That’s unfortunate and bound to be disappointing. I hope you get a prompt and helpful response from Anova support. I do understand about the “express sous vide” method of setting the oven temperature higher and using the probe to pull food when it’s ready. That’s what I use regularly and it works well. I apologize if I seemed to be recommending some other method - I wasn’t - I just wondered if your expectations of the oven may have been different than what it actually does, as that has often been the case here with new users. For instance, some people have anticipated that the oven would turn off when the timer beeped (like a microwave) which it doesn’t. I am very much a beginner at using the Anova Oven, but I’ve gained a lot of help from others on this forum, so I try to share my own experience about what seems to work in case it might be helpful to someone else. If you’ve been listening to Scott and doing other research on the Anova, you’ll be well served by all the information that’s available, and the assistance from some very experienced people on this site, like chatnoir and others. I hope you enjoy your APO and quickly get past any technical glitches with the probe!

Thanks for the reply. I’m hoping it’s something that can be remedied or maybe even fixed with a firmware update. It was certainly disappointing to have an overcooked protein. I’ll run some more tests with the probe I have to see if the probe inaccuracy is consistent.

Its critical to keep the tip inserted into the largest area of the cooking subject(usually meat) and away from bone and cartilage.

Hi Dave,
This was an emulsified sausage. No bones or cartilage in sight. I had the probe at a 45 degree angle with the tip of the probe at the center of the sausage