Hi, My water temperature is 1.5 degrees higher than the Nova temperature settings using a Thermapen. (measured after the cook) I just did a 27.5 hour cook on a Round Tip steak at 131.5 setting. meat came out at 144 -145 using a thermapen, medium well to well done. WHY? This the first time I checked the meat temp. I did a 36 hour cook on a round steak at 131.5 and meat came out medium rare to medium. (months 6 months ago) I did not measure meat temp and water temp at that time. Is there some process that when the meat breaks down it rises the internal temperature of the meat?

OR did my searing of the meat using a blow touch raise the temp to well done? 1 " thick Searing the meat did not take longer then 1 minute per side (guess)

Thanks from the Newbie

Well, if your water bath was actually at 131.5 at the time you removed your food - and it had stayed at 131.5 for hours prior to your removing the food, then there is no possible way that the increased temperature was from the sous vide cook. The temperature increase must have occurred from some external heat source after you took the food out of the bath.

Hope this narrows it down at least a little for you.

Thanks Mirozen, Temps must of raised when searing. This was the thinnest meat I have cooked so far. Any guide lines of cooking at a lower temp for thinner meats prior to searing as not to over cook when searing?

When things are cooked more than expected the searing technique is usually at fault.

One inch is pretty thin. I suspect that it cooked more while you seared it.

GMan, out of curiosity and to help you develop your blow torch technique you might want to offer up a sacrificial piece of meat, just a cube or small square, not a whole steak.

Subject it to your usual searing technique’s proximity and time guess. When done, cut it in half vertically through the two seared sides and examine the depth of colour change to gain a better understanding of your technique.

When searing with your torch remember that if you are using propane fuel at the blue tip of the flame you are applying about 3,500F of heat which can penetrate deeply as you will observe. Keep your torch moving and try to minimize the amount of yellow flame on your meat.

Any guide lines of cooking at a lower temp for thinner meats prior to searing as not to over cook when searing?

Make sure the exterior surface of the meat is as dry as possible. Water on the exterior must boil off before searing will occur and this can promote overcooking.

I find I have my best results when I let the meat rest for 15-30 minutes. The interior will cool somewhat which makes it easier not to cook past my desired level of doneness when searing. I can use this time to get the side dishes ready.

As others have noted, thinner steaks are easier to overcook. Since I started using the sous vide technique I now tend to shop for thicker steaks of smaller diameter rather than large diameter steaks that are thinner.

Thank you very much Chatnoir. I should of thought of that! Makes sense.

Thanks Stevej, Great ideas. My intent of this cook (round - bought at a 2 for 1 sale) was slicing this chunk of meat into hamburger size portions. I did not put it in a bun and ate it as a steak. I guess if it is in a bun, one does not need to sear since you will not be seeing it. The rib eye and my searing was fine. Great forum for the newbie.

Thanks John, I believe you are correct.

Hold on thar Gman, - steak on or off a bun needs a quick sear for flavour more than appearance.

Get yourself the 101 on _Maillard Reaction.

Consider that for practical purposes your SV cooked steaks have been poached. They won’t have the familiar steak flavour conventionally cooked steaks have however you like them cooked. That’s the purpose of a well applied sear, to develop a delicious flavour along with a substantial amount of aroma.

He says sear for a minute a side but I think a few seconds a side would be better on a thin steak. I haven’t tried it myself yet but will do at some point in the future.

Have you any thoughts on this Ember and Chatnoir ?

Thank you again chatnoir for your response. SV poached - understand. Maillard reaction as “talked about on Americas Test Kitchen” - was to make sure meat was DRY to BROWN vs the FLAVOR that was Created. (not to argue, I thought the flavor in a steak came from the marbling ((fat)) of the meat of what the cattle was fed) . ie. Wagu #5 or # 7. CONFESSION - I’ve been eating hamburger and not purchased a steak since/ eaten since 2005? During the winter times I went to visit my parents when they were wintering in Florida. Had steak down there. WOW OMG WOW. I have not been able to FIND that taste again, so I have been eating hamburgers. Different restaurants had the same steak flavor. It’s hard to go to the gulf and eat fresh fish when you crave that taste of their beef. I’ve gone to 2 different butcher shops and HIGH end Grocery stores to find that taste. Could not. All don’t sell prime. I just learned that Costo sells prime in Florida - In my area don’t know?. (not a member)
I don’t pay (try not) more than $3.00/lb for protein. I found sousvideeverything on youtube, these guys started me on my quest for that “TASTE” I am looking for. These guys know their STEAK. So me paying $8 bucks a lb for a Rib Eye and it taste like hamburger is a waste for my taste buds and pocket book. Do I need to pay $29 /lb - $229 /lb for that taste, I don’t know. The sousvideeverything guys swear by Picanha, a Brazilian cut of meat (https://www.youtube.com/watch?v=5kLSy6bPWnk&t=305s) I showed the butcher a video of what I was talking about (sousvideeverthing - show how to make that cut -since he said he did not know of that term) and he told me that he would need to order a whole butt to make that cut. (Cub Foods)
As I said I am learning, looking for that taste of a steak or a medium rare burger. Burning - drying out ground beef burger to 165 is not working. I’ve been upping my game by grinding my own beef for burger material (from roasts) as so to reduce the ecoli threat when reducing temps of burger cooking.

Thanks again for your input.

I’d think a minute each side would be too long and cause an extended grey band in the meat. But, I was talking to someone on a Facebook group today who showed a 1 min per side steak that didn’t have a significant grey band. I’m wondering if the crust that is formed as the mayo sets off a Maillard cascade acts as a bit of an insulation layer, much like the carbon layer of heavy charring does on wood.

Perhaps someone who does a lot of mayo searing can shine a light on this.

Sandra, i’ve been using mayo for browning over many years, but mostly on grilled sandwiches (Monte Cristo, Cheese, etc.) for the golden brown colour and crispness it develops.

Just be aware, you’re not making tuna salad. Go easy on the mayo, all you need is a film. And no, it won’t melt and run off the steak as it sears. It’s not very different than using a film of oil and corn syrup to sear your meat. Any form of sugar enhances browning and flavour. The mayo brings a little more fat, sugar, acid, mustard, and seasoning to the party.

Gman, you are sort-of correct about marbling. To me, raw beef fat doesn’t taste good at all. When it melts it contributes flavourful gelatinous moistness to the meat or anything it touches. That’s why McDonalds only used beet fat in their fryers for decades.

Most Americans don’t realize that Florida produces the most beef in the USA. Their grass grows year round and as you noticed makes the best cattle feed for flavour, in my opinion. Grass fed beef is high in both Omega-3 and 6 fatty acids which contribute to wellness in humans. The feed lot corn fed beef has very little Omega-3 and less flavour.

That Picanha cut isn’t just Brazilian, it’s their name for Top Sirloin Cap. That butcher might have been confused. If he sells sirloin steak or roasts every sub-primal Sirloin pack he gets contains the Picanha. It’s right in the middle on the outside. “Whole butt” isn’t a beef part i know.

Burning never works.
For your own burger mix, try a blend of chuck and sirloin.
Form your patties, vacuum package according to use, SV cook to Pasteurize, chill and hold. When you need a burger, warm <130F, season and grill, or however you cook them with or without the mayo.

Thanks again for your response. I just saw it to day. I have done purchased burger 85/15 approximately 3/4 - 1 inch thick placed into freezer zip lock bags and used the water dis placement method (vacuum would pack the meat) and in to the spa @ 135 for 2 1/2 to 3 hours then a quick blow touch sear. (pre seasoned with salt, pepper, garlic) The burger comes out with a crumb almost as like a baked cake. (photo) 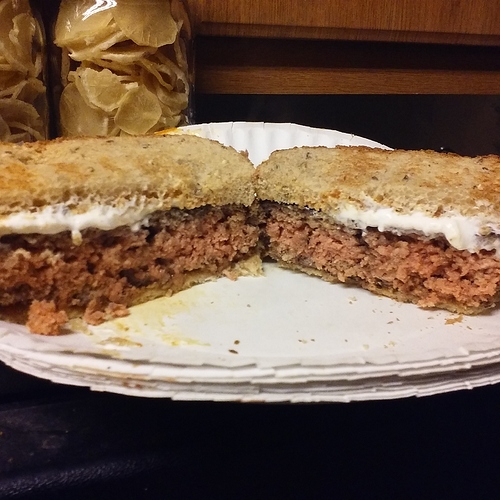 …just to add I did buy some Wagyu grade 1 or 2? Not impressed I like my burger better.