Today I made a keto version of fried chicken and it’s absolutely awesome!

I cooked the chicken wings for 2h at 60°C than poured over one scrambled egg and dipped the wings into three different coatings. One was collagen protein powder, second was a mix of whey isolate and casein powder and the third one was sesame flour from Sukrin. To all three powders/flour I added sime garlic powder, onion powder, cayenne pepper, smoked paprika, sweet paprika, ground cumin, marjoram, rosemary, salt and pepper. And at the end I fried them in pork lard just the time that they got the color.
The best one and for me even better than the real ones were the ones coated in the Sukrin sesame flour. 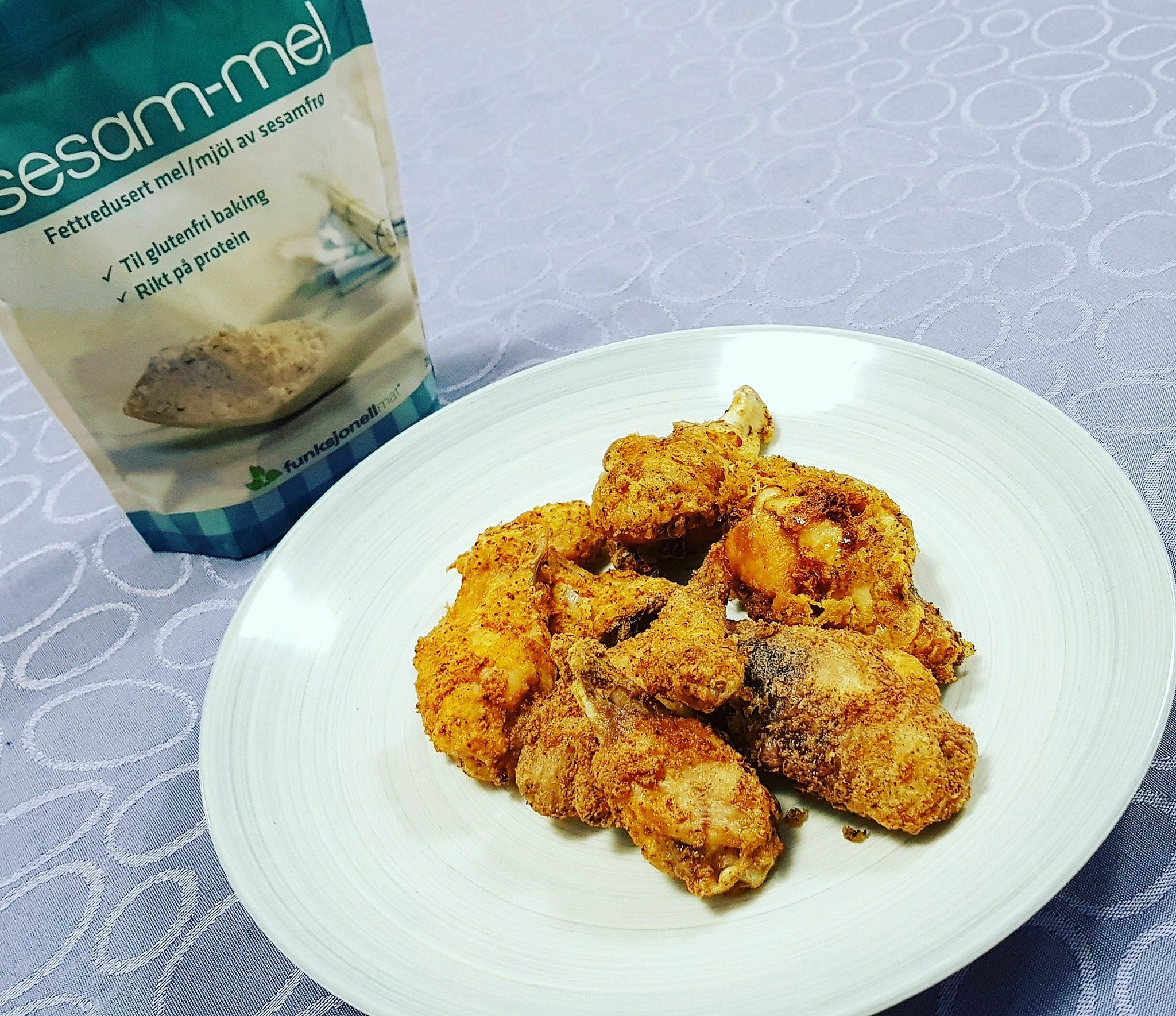 Woah, with protein powder!? I never thought of using that for chicken coating. I dig it. I’m really curious - how did it taste for the protein powder and the whey isolate/casein powder? And I imagine they were unflavored? Also, how did they hold together?

(I know, I know…I have a lot of questions. But this blew my mind!)

collagen was from sports research LINK and the mix was Quest multipurpose mix LINK.
The taste of the collagen ones was like it was dipped in egg and flour and the ones that were dipped in quest protein, tasted more like a mix of flour/breadcrumbs. They held like with normal breading, except the ones with collagen, the coating was a little bit crumbly so it was crumbling if you pressed to much with the finger. Both were good but the collagen ones were oily, so I wouldn’t make them again but with quest I will repeat for sure.

but the ones dipped in sesame flour were just unreal… that ones are perfect!!! here’s the link to Sukrin USA LINK 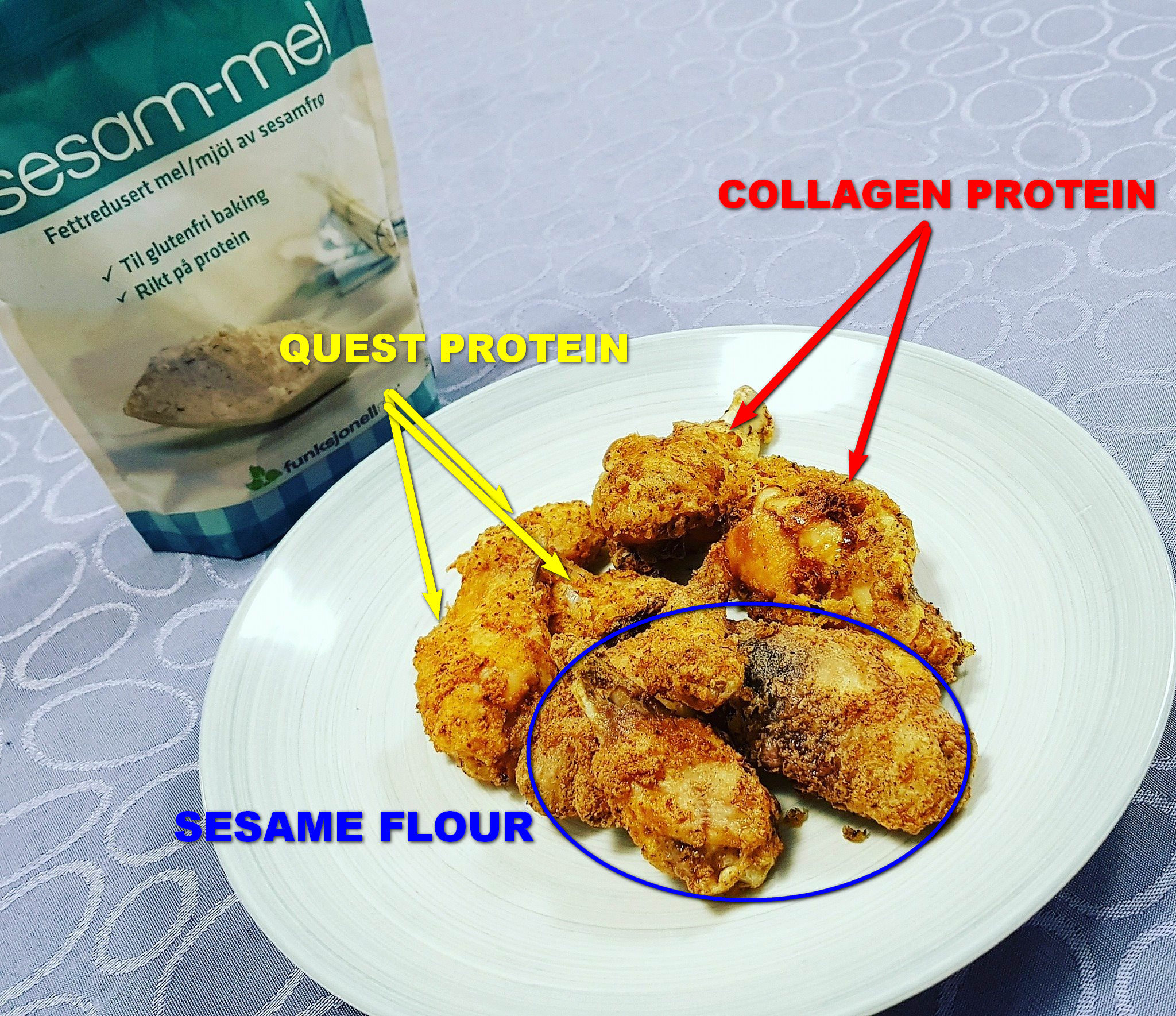 Just to be picky but did you notice that garlic powder, onion powder, cayenne pepper, smoked paprika, sweet paprika, ground cumin, marjoram, rosemary, salt and pepper is 11 different herbs and spices if you include the powder!

Just to be picky but did you notice that garlic powder, onion powder, cayenne pepper, smoked paprika, sweet paprika, ground cumin, marjoram, rosemary, salt and pepper is 11 different herbs and spices if you include the powder!

would you like to say that I could coat them just in the spices and than fry them?

Can you share the spice mix you made out of those spices in amounts? or just equal amounts of everything? You first spicecoated them, then rerolled in sour milk, then rolled in the sesame flour? Or how?

mejakm - Next time you mix up a batch just weigh all the containers you are taking ingredients out of just before you start, then weigh them again once you’ve completed your mix. Subtract the original weights from the new weights and you’ll have the amount of each ingredient you used.

I cook the same way you do, adding spices until things just “taste right”, and this is how I resolved the problem for me!

I use this for homemade KFC mix. I usually use bone in chicken thighs.

Marinade the chicken in 1L buttermilk and 2 Tsp salt for at least 8 hours. Remove, dry and vacuum seal.

Sous Vide for 2 hours at 155F. There are several options available for texture and juiciness so use what suits you.

While you’re waiting for the chicken to cook, mix one cup of flour with the following:

Whisk two eggs. Take the chicken from the vacuum bag, egg wash and coat in the flour. If you prefer crispier chicken, rewash and recoat.

Fry in 350F Oil for 2-3 minutes per side. KFC use pressure fryers but for most home cooks this isn’t practical, and no a pressure cooker won’t do (unless you like explosive oil fires in your kitchen!)

This is pretty close, but if you want to achieve the real KFC flavour add 2 tablespoons MSG to the spice mix. I’m not overly keen on this but it really does come very very close to the KFC taste.

@MichaelF I’ve tried something like that before. Maybe I double or triple the amount of spices

Maybe the memories are just golden. I’ve only had KFC once, because there isn’t any KFC’s in my country.

@Teledog Thanks for the heads up! Too bad the Marion Kay 99x Seasoning is not available from Europe, so no hope of having some KFC for xmas…

However I will order some and make some when it arrives sometime next year.

Literally everything I do, I do it without measuring and just as I like

The same is with SV. I set the temp and times as I think if will be the best for me

And actually I don’t know how KFC chicken tastes because in my country (Slovenia) there’s no KFC (ok I travel a lot and also now that I moved to Spain, here it is) but I’m on a ketogenic diet so however I can’t eat it, that’s also why I called it KFC - Keto (the abbreviation of ketogenic) Fried Chicken)

Time to break out the jewelers scale mejakm! lol

Seriously though, I cook the same way you do, so I understand completely. It’s always driven my wife nuts, as I usually can’t just give her a recipe for a dish I make. I also tend to create new dishes based on using the smell of the various spices to decide which ones to use and how much of each.

Hahahaha I was thinking the same

actually I took an eye on eBay for jewelers scales

I do the same… I spice my dishes based on the inspiration I get the moment I’m cooking… It depends on million factory… smell, sauce, colours, size, shape,… every single “no sense” factor to someone influence my decision which and how much spices to use. And I do always taste my food throughout the whole cooking process (that’s the reason I’m always full already before plating the dish