Hi everyone - I’m doing a beef short rib recipe that cooks en sous vide for 48-hours. Right now, I’m about 26 hours into that. My issue is that the marinade that is in the bag with the ribs has sunk to the bottom of the bags. (I don’t have a vacuum sealer, so I’m using Ziploc.) So for at least one of the bags the ribs are only halfway covered by the marinade.

Is there a preferred method for redistributing it so the meat is covered evenly? I don’t want to disturb it more than necessary. I suppose I could rotate the bags 90 or 180 degrees, but would submerging the zipper part be problematic?

Marinade isn’t going to penetrate during cooking, so there’s no need to redistribute it. The essence of rib that will add to it as you cook will make for a fantabulous sauce once it is clarified and strained.

Echoing what @Ember said marinades won’t penetrate any deeper while cooking than just left to soak. You can find some good info about the penetration of marinades here: https://amazingribs.com/tested-recipes/marinades-and-brinerades/science-of-marinades-and-brinerades
You can either cook your marinade with the ribs or not, it really won’t make much of a difference if you’ve already marinated your ribs.

Thanks, @Ember and @Brian1! It does call for making a pan sauce with the bag liquid, so that settles that, I think!

Ed, Zip-Loc freezer bags have a superior seal. However, you might consider double bagging bulky items like your short ribs.

You can gently tumble the bag to ensure the ribs are evenly in contact with the liquid. As Ember said, it’s not really needed, but it will make you feel better.

Classical Beef Short Rib recipes are braises which you can’t really duplicate by just using the SV technique. That’s because the distinctively rich flavour depends on evaporation and browning to concentrate and enhance flavours which can’t happen in a bag.

Yeah, I think I probably should’ve double-bagged, as since I posted one of them has developed a leak! Ugh. Is it too late to pull it out and drop into another bag?

I see your post was four hours ago! I hope you did just rebag it!
Fingers crossed!

I did, and it all turned out just fine! I think the water pressure helped me. So even though there was a leak in the bag, the marinade seeped out into the water bath, but no water got into the bag. no harm, no foul.

They were very tasty! 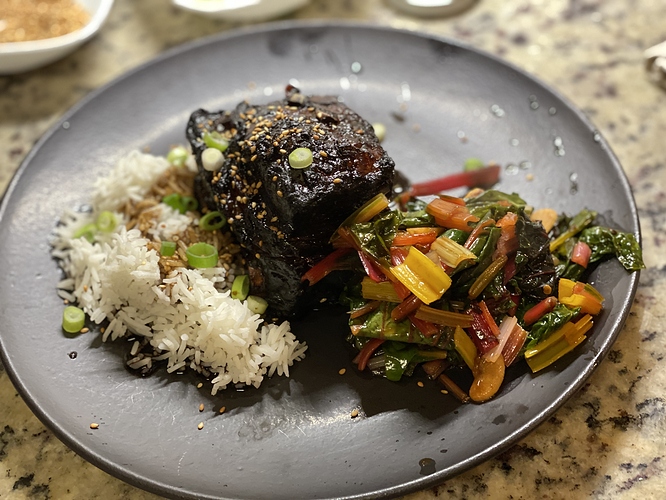 Thank you, everyone! Stay safe and well.

Hi, I know it’s been a while, but could you share a recipe for your marinade? I was just going to cook the beef rib this weekend. Lately, I’ve been trying to diversify our home’s dinners. We’re on the Taco Bell Keto diet( we don’t eat carbs, sweet water, or snacks) and I can already see changes in my body. In a month, I lost 5 kg without effort, because despite the fact that I do not eat carbohydrates, I still eat everything else( even fast food hah). So I will be happy if you share the recipe for the marinade. I’ll make the family happy at the weekend.